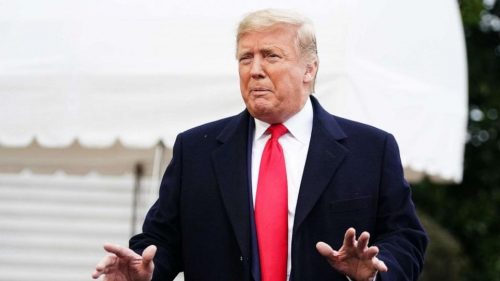 President Trump faces a clash with Senate Majority Leader Mitch McConnell (R-Ky.) and other Senate Republicans over the president’s desire for a $2 trillion infrastructure spending bill, something he promised during his 2016 campaign.

“In other words, seize upon crisis to try to makes systemic or policy changes you couldn’t otherwise pass,” McConnell told “The Guy Benson Show” on Tuesday.

But Trump has signaled support for a $2 trillion infrastructure spending package.

“With interest rates for the United States being at ZERO, this is the time to do our decades long awaited Infrastructure Bill,” Trump tweeted on Tuesday. “It should be VERY BIG & BOLD, Two Trillion Dollars, and be focused solely on jobs and rebuilding the once great infrastructure of our Country!”

Treasury Secretary Steven Mnuchin told CNBC Wednesday that he is in discussions with House Democrats on putting together an ambitious package, only days after Trump signed into law a $2 trillion economic relief bill that will substantially increase the federal debt.

“We’ve been discussing this for the last year with the Democrats and the Republicans. I’ve had ongoing conversations with Richard Neal on this. And we’ll continue to have those conversations,” he said, referring to the chairman of House Ways and Means Committee and Massachusetts Democrat.

Senate Democrats have introduced their own ambitious infrastructure plan and are expected to support whatever Pelosi puts together.

McConnell and Senate Republicans are waving caution flags. They say the next round of coronavirus relief has to be tailored to addressing economic problems caused by the pandemic.

Scott Jennings, a Republican strategist and adviser to McConnell, said the GOP leader is making the right move to slow down Pelosi.

“I think getting the initial relief package was vital and he got that done. I think it’s also prudent to assess how that’s working and keep the focus on everyday people who need relief and not all the pie-in-the-sky left-wing stuff Democrats have been trying to do since they took the House,” he said.

“After COVID-two and COVID-three, getting a package out of the Senate is going to be extraordinarily difficult. I think Republicans are feeling a little burned over how bad some of the decisions were that were made in the second and third bills,” said a Senate Republican aide, referring to a $100 billion-plus package the House and Senate passed in mid-March and the $2 trillion relief package signed into law Friday.

McConnell scheduled a vote on the bill Pelosi passed right before the House left town for a weeklong recess despite strong objections from Sen. Tom Cotton(R-Ark.) and other conservatives.

Cotton argued the paid sick leave provisions in the House legislation would create an incentive for employers to fire workers.

But amid the plunging financial markets and rising public anxiety, McConnell urged his colleagues to move quickly.

“I literally told my colleagues to gag and vote for it, for the sake of building bipartisan momentum because Republicans understand a national crisis calls for urgency,” he later said.

Senate Republicans also went along with concessions that Senate Minority Leader Charles Schumer (D-N.Y.) demanded in the phase three relief package, such as beefing up unemployment benefits to the point where in some states workers could make more money being laid off than on the job.

Trump’s and Pelosi’s plans for a massive stimulus package won’t be put on the same fast track, GOP aides warn.

“There’s not likely to be the stampede to do something again. It will be more measured and getting 60 votes will be a lot harder,” the Senate GOP aide predicted.

Brian Darling, a Republican strategist and former Senate aide, said GOP senators are wise to wait before embracing any major infrastructure spending deal that might emerge from negotiations between Pelosi and Mnuchin.

Darling said Trump “may be impatient for another stimulus” but warned the president would be wise to put the brakes on a “Pelosi-driven stimulus that is not targeted toward the areas that will spur economic growth.”

Republican senators are already hearing from companies complaining that it is becoming difficult to keep businesses staffed because workers are taking more sick leave.

A second Senate GOP aide said Pelosi and House Democrats would have a better chance of getting an infrastructure bill passed if they agree to reform the National Environmental Policy Act (NEPA), which requires federal agencies to prepare environmental impact statements for major projects.

“I wouldn’t expect anything anytime soon, but there are policy reforms you could make, like reforming NEPA that would make some type of infrastructure deal possible,” said a senior GOP aide.

“Today Democrats are moving forward [the] infrastructure framework that we first presented at the end of January. We need to advance our infrastructure to address some of the critical impacts and vulnerabilities in America that have been laid bare by the coronavirus,” Pelosi said.

“We’re moving forward with strong action for the fourth coronavirus bill,” she declared.

Senate Republicans, by contrast, say the next round of economic relief should focus first on the shortfalls of the phase three coronavirus response legislation before embarking on ambitious policy proposals that do not directly address the economic fallout of the health crisis.

“I think phase four needs to first of all be focused on what we find are the shortcomings in phase three,” Sen. Roy Blunt (R-Mo.) said Wednesday on “The Hugh Hewitt Show.”

“We need to fill those gaps. That needs to be our first focus. And frankly, let’s let things move on for a little while and see what we need to do next. But job one is to clean up what we did in phase three,” he said.

Even so, Pelosi and Senate Republicans may find common ground on some areas, such as an expansion of broadband internet infrastructure, which would be a boon to many rural areas, and a reauthorization of the Highway Trust Fund, which Republican lawmakers want to pay for.

“I actually think you could make a case for broadband infrastructure. That probably is relevant if you’re going to have this whole new economy with more people working from home,” Jennings, the GOP strategist and McConnell adviser, said. “There are still vast swaths of this country where we don’t have great broadband access.”

The Senate Environment and Public Works Committee last year advanced a transportation infrastructure act that would spend $287 billion over five years, including a $259 billion formula program to repair roads and bridges.