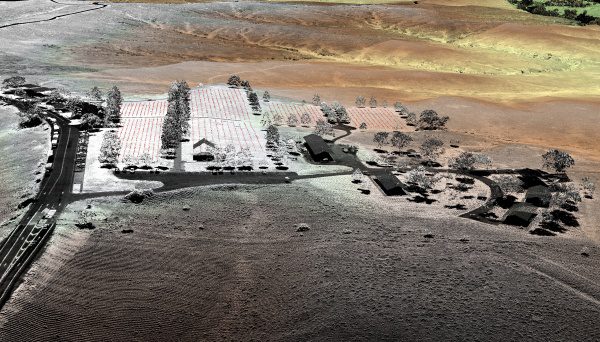 By Michael Meiser and Daniel Ngoroi

In August 2015, the National Park Service (NPS) contracted Woolpert for the Little Bighorn National Monument Mapping Project to record the locations of thousands of headstone markers at the Custer National Cemetery as well as hundreds of battlefield markers at the Little Bighorn National Monument site, which covers approximately 5.5 square miles. Woolpert used high-density, airborne topographic light detection and ranging (LiDAR) data acquired via a separate contract to create an accurate terrain map of the site as well as a base map for the digital database.

The challenge was creating a feature-extraction methodology that would locate objects as small and varied in size as the headstones and battlefield markers, instead of more-substantial features typically collected such as roads and buildings. The NPS wanted to create an accurate, digital database of the more than 4,320 headstone markers and 280 battlefield markers, which identify where the battle took place and where soldiers fell.

To acquire the needed LiDAR data, Woolpert employed a Leica ALS70 sensor system onboard a Cessna Titan 404 aircraft at a point density of 12 points per square meter. This exceeded the U.S. Geological Survey Quality Level 1 LiDAR density requirement, equating to a point every four inches. 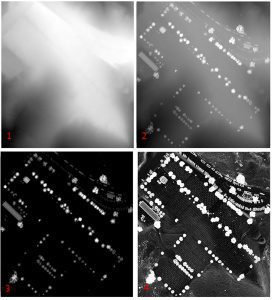 Given that the average dimensions of the markers are 13 inches long and 4-12 inches wide, there would be at least one LiDAR return from any point on the top surface of a marker. Using this return, the task would involve verifying whether the return truly represented the location of a marker or possibly other above-ground features, such as tall grass.

After the surface had been established, a method was developed to triangulate the centroid of the polygon that represents the top surface of the marker. This process had to be accomplished automatically, as it would be time consuming to locate each marker manually.

Woolpert began by applying a robust ground-filtering routine to classify ground and non-ground points. To identify the most-suitable ground-filtering methodology, a review of the geomorphology and local environmental conditions was completed. Among the elements considered were slope and elevation difference, surface cover and point density.

The next step was to create surface models, and determining their resolution was crucial. For the markers to be identifiable, resolution had to be smaller than the markers’ average size. In this case, a pixel resolution of four inches was used. 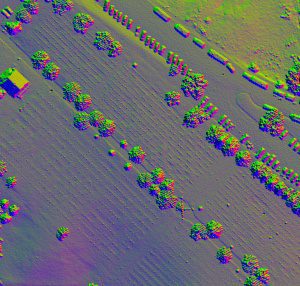 Directional illumination cast across the hypothetical sky accentuates the shadows cast by each cemetery marker.

During data processing, Woolpert created various shaded-relief models, which are an illuminated surface created when a light source is positioned above a surface model, and the illuminated value of each pixel is calculated.

To amplify the effect, four shaded-relief models were created by positioning the light source in 90-degree increments from a 45-degree azimuth and at a 30-degree altitude. A 45-degree azimuth was chosen, because that was the general orientation of the cemetery. Directional illumination across the sky accentuated the shadows cast by each marker. 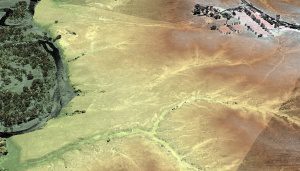 An oblique view of the cemetery point cloud shows feature extracted headstones in the distance. 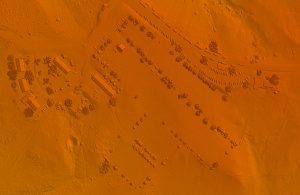 Then a three-step workflow for feature extraction was utilized, beginning with an edge detector to find marker edges. Next, a threshold to produce a binary edge raster was applied. Then a segmentation routine was used to extract the shadows cast by each marker as polygonal features. The resulting polygons then were used to extract a centroid.

Through this process, an overall classification accuracy of 99.7 percent was achieved, with the remote-sensing analysts identifying 4,320 markers. Only 12 headstone markers were not located (due to a heavy tree canopy), and all 287 battlefield markers were located. The NPS now has an accurate, detailed headstone map and database to help preserve and commemorate Little Bighorn National Monument.