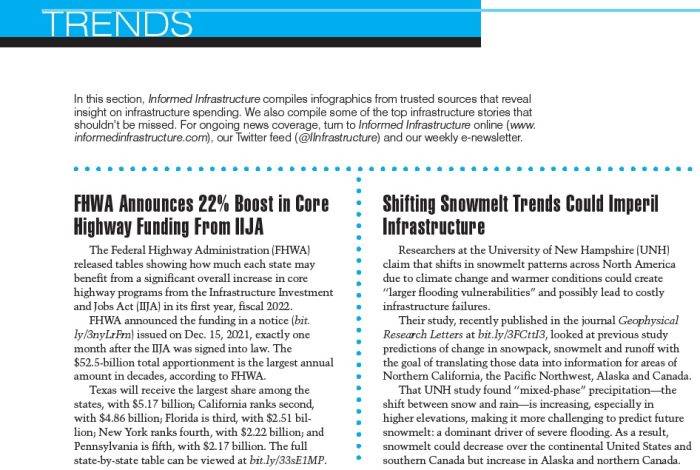 The Federal Highway Administration (FHWA) released tables showing how much each state may benefit from a significant overall increase in core highway programs from the Infrastructure Investment and Jobs Act (IIJA) in its first year, fiscal 2022.

FHWA announced the funding in a notice (bit.ly/3nyLrFm) issued on Dec. 15, 2021, exactly one month after the IIJA was signed into law. The $52.5-billion total apportionment is the largest annual amount in decades, according to FHWA.

Texas will receive the largest share among the states, with $5.17 billion; California ranks second, with $4.86 billion; Florida is third, with $2.51 billion; New York ranks fourth, with $2.22 billion; and Pennsylvania is fifth, with $2.17 billion. The full state-by-state table can be viewed at bit.ly/33sE1MP.

Researchers at the University of New Hampshire (UNH) claim that shifts in snowmelt patterns across North America due to climate change and warmer conditions could create “larger flooding vulnerabilities” and possibly lead to costly infrastructure failures.

Their study, recently published in the journal Geophysical Research Letters at bit.ly/3FCttI3, looked at previous study predictions of change in snowpack, snowmelt and runoff with the goal of translating those data into information for areas of Northern California, the Pacific Northwest, Alaska and Canada.

That UNH study found “mixed-phase” precipitation—the shift between snow and rain—is increasing, especially in higher elevations, making it more challenging to predict future snowmelt: a dominant driver of severe flooding. As a result, snowmelt could decrease over the continental United States and southern Canada but increase in Alaska and northern Canada. 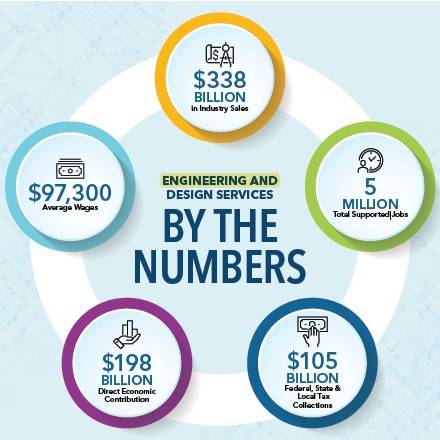 The data show the industry has rebounded from project postponements due to COVID-19, although firms identify a tight labor market and lack of qualified workers as continued barriers to growth across public and private markets.

This is the second annual release of the Engineering and Design Services industry assessment, which tracks the industry’s economic contributions, analyzes key economic drivers and forecasts industry growth.

The sentiment report, conducted before the passage of the Infrastructure Investment and Jobs Act (IIJA), tracked the sentiment of engineering leaders around the country. The report found that compared to three months earlier, respondents noted positive sentiment for transportation sectors, including Roads and Bridges (+30), Transit (+20) and Airports (+23). Looking ahead 12 months, the net rating of positive sentiment among respondents was even higher for Roads and Bridges (+69), Transit (+60) and Airports (+54).

Real estate developers and policymakers can promote equity, environmental resilience and economic mobility by investing in forward-looking infrastructure, according to a new report from the Urban Land Institute (ULI). The report indicates that recognizing infrastructure, land use and real estate development as interconnected facets of the built environment is necessary to create long-term real estate and community value.

2. Invest in public transportation and mobility.

National consulting group Appleseed Strategy unveiled the results of a U.S. business survey of AEC firms to understand the ongoing impact of the COVID-19 pandemic.

Querying a sample of 39 companies in architecture, engineering, landscape architecture and other consulting services—ranging in size from five people to 1,000-plus—Appleseed Strategy notes the following:

• Nearly 77 percent of respondents were back to pre-pandemic staffing levels.

• About 9 percent were even larger than they had been in March 2020.

• Nearly 53 percent of respondents had implemented salary cuts in at least one staff category because of the pandemic.

• Of the firms that received paycheck protection program (PPP) loans or other pandemic relief funding, about 88 percent had their loans fully or partially forgiven.

View the full report at bit.ly/3A9B4wL.

Comments are disabled
NEXT ARTICLE
Engineering Your Career: Quick Guide On Writing a Structural Engineer Resume
January 28, 2022
PREVIOUS ARTICLE
One Hundred Above the Park: A New St. Louis Landmark
January 28, 2022