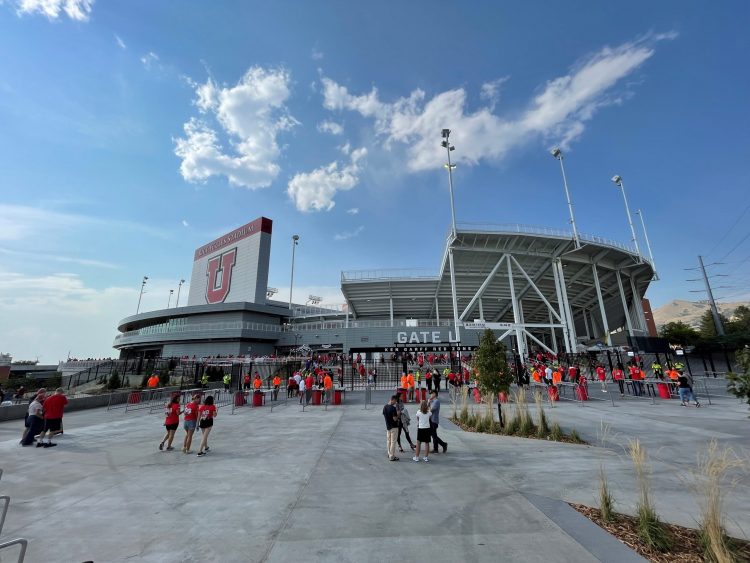 Salt Lake City, Utah – Global design firm Populous announces the completion of the $80 million Ken Garff Red Zone at Rice-Eccles Stadium at the University of Utah in Salt Lake City. Populous conducted a master plan study of the project site back in 2017, and served as design architect for the stadium expansion, providing design and branding services, while VCBO Architecture served as architect of record.

The Ken Garff Red Zone replaces the existing Spence Clark Football Center, which was demolished to allow for the creation of a new south end zone. The new structure seamlessly connects to the existing bowl, increasing the stadium’s capacity to 51,444 spectators. The field level of the facility serves as a game day home for the student-athletes and support staff and contains locker rooms for the home/visiting teams, referees and cheerleaders. It also contains a field club and recruiting lounges for future student-athletes. The upper levels contain premium amenities for fans, as well as a connection at the concourse level to create 360-degree travel around the stadium with new restrooms, concessions and a team store.

“This expansion is going to be a game-changer for our student-athletes across all of our sport programs, helping us to recruit the very best and equipping them with resources to compete at the highest level,” said Mark Harlan, University of Utah Athletics Director. “We’re also excited to expand our fan amenities and allow Utes football fans to experience one of the best atmospheres in college football in a brand new way.” 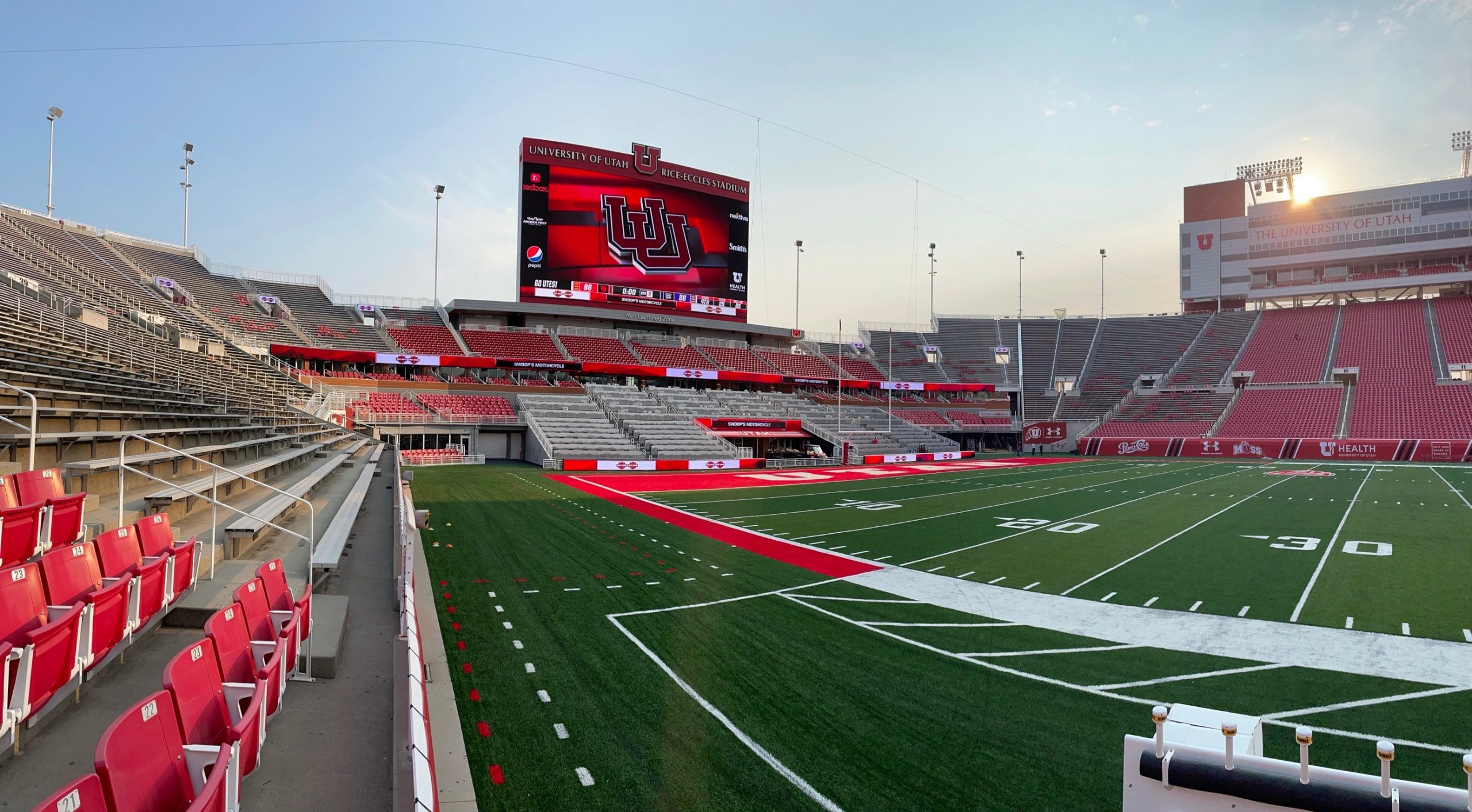 With a focus on premium amenities, the Ken Garff Red Zone features a wide variety of fan seating, including 44 loge boxes, 15 premium suites that are 100 feet closer to the field than previous seating options, and the addition of 1,200 chairback seats and bench seats in the endzone. Populous and the university added in more low/mid-level seats than were taken out during construction to make the game day experience an all-inclusive event for all levels of ticket holders. The facility is also home to a combination suite club and a premium rooftop terrace managed by Club Corp that will be activated for members on game days, as well as throughout the year as a restaurant and event space for weddings, corporate functions and other community gatherings.

“From developing the initial concepts for the end zone expansion in 2017 to opening day, it’s been a privilege to work with the University, Athletic Department and Auxiliary Services to deliver a new experience for fans to enjoy in Rice-Eccles Stadium,” said Jeremy Krug, Associate Principal at Populous and lead designer on the project. “It was important to create a project that honored the Utah brand and allowed the story of the football program and the community to shine through. This Ken Garff Red Zone expansion will do just that, creating an unrivaled game day experience.”

Populous encountered several challenges brought about by the stadium’s existing elements. Before the expansion, game day operations were spread out into different areas of the stadium, campus and the Clark Center. Without a continuous concourse, access to the south end zone from other parts of the stadium was limited. Additionally, the university purchased a new score board two years ago, prior to the renovation. Populous seamlessly designed the end zone project around the new scoreboard, while making sure it matched up with the existing east and west stands. Populous’ design accommodates for a 360-degree fan concourse and ample space to efficiently give the team everything they need in one place.

“It’s been an honor to help deliver this project right in our backyard in Salt Lake City,” said Brent Tippets, Principal at VCBO. “Through the expansion of the south end zone, we’ve established the University of Utah’s presence on the national stage and created a subject of deep pride for our community to enjoy for years to come.”

In 1998, Rice-Eccles Stadium at the University of Utah underwent a major expansion and renovation in preparation of hosting the opening and closing ceremonies of the 2002 Winter Olympic Games. As a result, Rice-Eccles Stadium has been home to the Opening Ceremony cauldron since 2002, where it sat behind a secure perimeter. This deterred visitors from seeing this major part of the university’s Olympic legacy, as it could only be viewed up close if the stadium was open. As part of this project, the cauldron was refurbished and relocated to the southwest corner of the stadium with a new 24/7 commemorative plaza to tell the story of the stadium’s role in Olympic history.

“It’s truly a unique opportunity to have a piece of history like the Olympic Cauldron on a university campus,” said Denver Finlinson, Associate Principal at Populous. “We wanted to ensure this feature was prominently displayed in a new home that allows visitors to experience the Olympic magic on game days and beyond.”

Another exciting element of the new Ken Garff Red Zone is the integration of branding and graphics. Populous implemented the Utah brand throughout the south end zone, which features a unique display of the team’s history. Additional graphic opportunities were included around the entire project to highlight past Utah coaches, All-American student athletes and Utah athletics history.

With the Ken Garff Automotive Group as a major donor, Populous used its experience working with sponsors at professional and collegiate athletic venues across the globe to help tell the story of the Ken Garff Auto Group as it relates to the University of Utah football team. Populous focused on performance characteristics of the various automobiles sold by Ken Garff and married them with Utah’s school record holders who exhibited similar characteristics.

The 15 suite-holders were able to choose which car brand they would like represented in their specific suites, along with the respective school record holder. Each suite has a different car brand/ school record holder combo integrated into the theme. Other branding initiatives highlight significant coaches and student-athletes in the team’s history, as well as the Ken Garff and Bob Garff family, which has generations of Utah alumni.

Populous is a global design firm that designs the places where people love to be together, like the Olympics, World Cups and Super Bowls. Over the last 40 years, the firm has designed more than 3,000 projects worth $40 billion across emerging and established markets. Populous’ comprehensive services include architecture, interior design, event planning and overlay, branded environments, wayfinding and graphics, planning and urban design, landscape architecture, aviation and transport design, hotels and hospitality, and sustainable design consulting. Populous has offices on four continents with regional centers in Kansas City, London and Brisbane. For more information visit www.populous.com.

VCBO Architecture is an award-winning integrated design firm with a team of 95+ professionals between two Utah offices, one in Salt Lake City and one in St. George. The firm serves a variety of clients throughout the Intermountain West and abroad and is dedicated to helping those clients solve their greatest challenges and develop functional, beautiful, sustainable and future-focused projects.