/ Articles / One Hundred Above the Park: A New St. Louis Landmark

One Hundred Above the Park: A New St. Louis Landmark 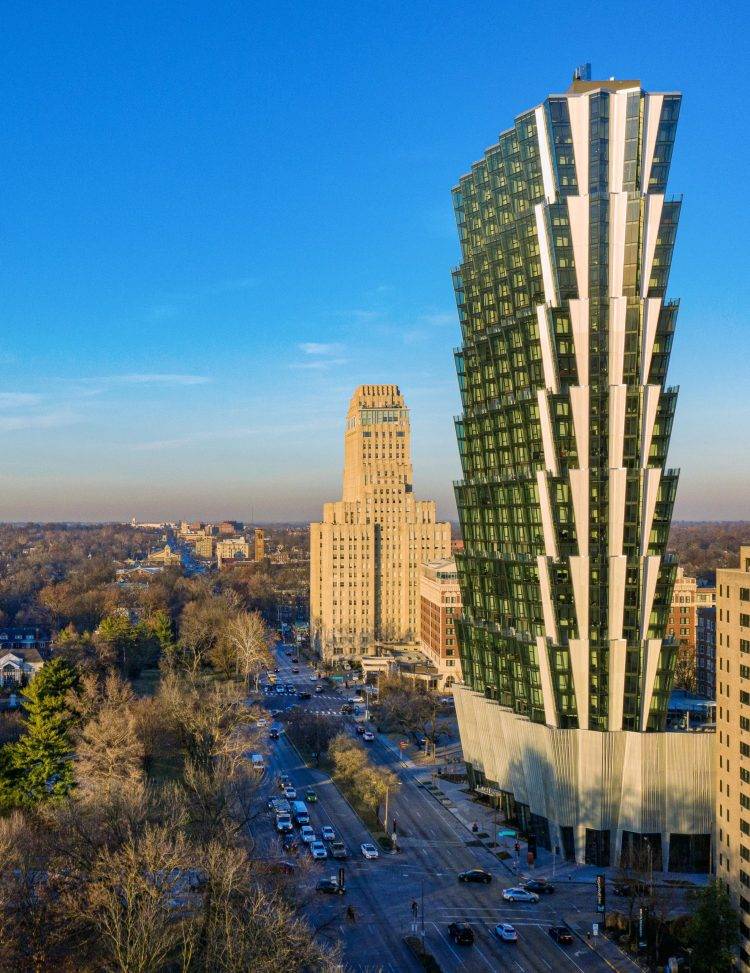 One Hundred Above the Park’s architecture has made it one of the most notable buildings in St. Louis, with views of Forest Park to the west and the Gateway Arch to the east. (Sam Fentress, courtesy of Clayco)

Rising 36 stories above the Central West End neighborhood of St. Louis, a strikingly modern apartment tower called One Hundred Above the Park has become the city’s newest landmark. Completed in 2020 and designed by Studio Gang (www.studiogang.com), an internationally acclaimed architecture and urban design practice founded by Jeanne Gang, the $130 million tower takes its name from its location at 100 North Kingshighway Blvd. In addition to two adaptive reuse projects in Chicago, One Hundred is the latest in a trio of ground-up projects Studio Gang has completed with Chicago developer Mac Properties (www.macapartments.com) that reimagine urban apartment buildings. The earlier projects, City Hyde Park and Solstice on the Park in Chicago, demonstrate a similar design ethos visible at One Hundred, providing views and access to natural light in a way that’s attuned to each building’s surroundings and climate. 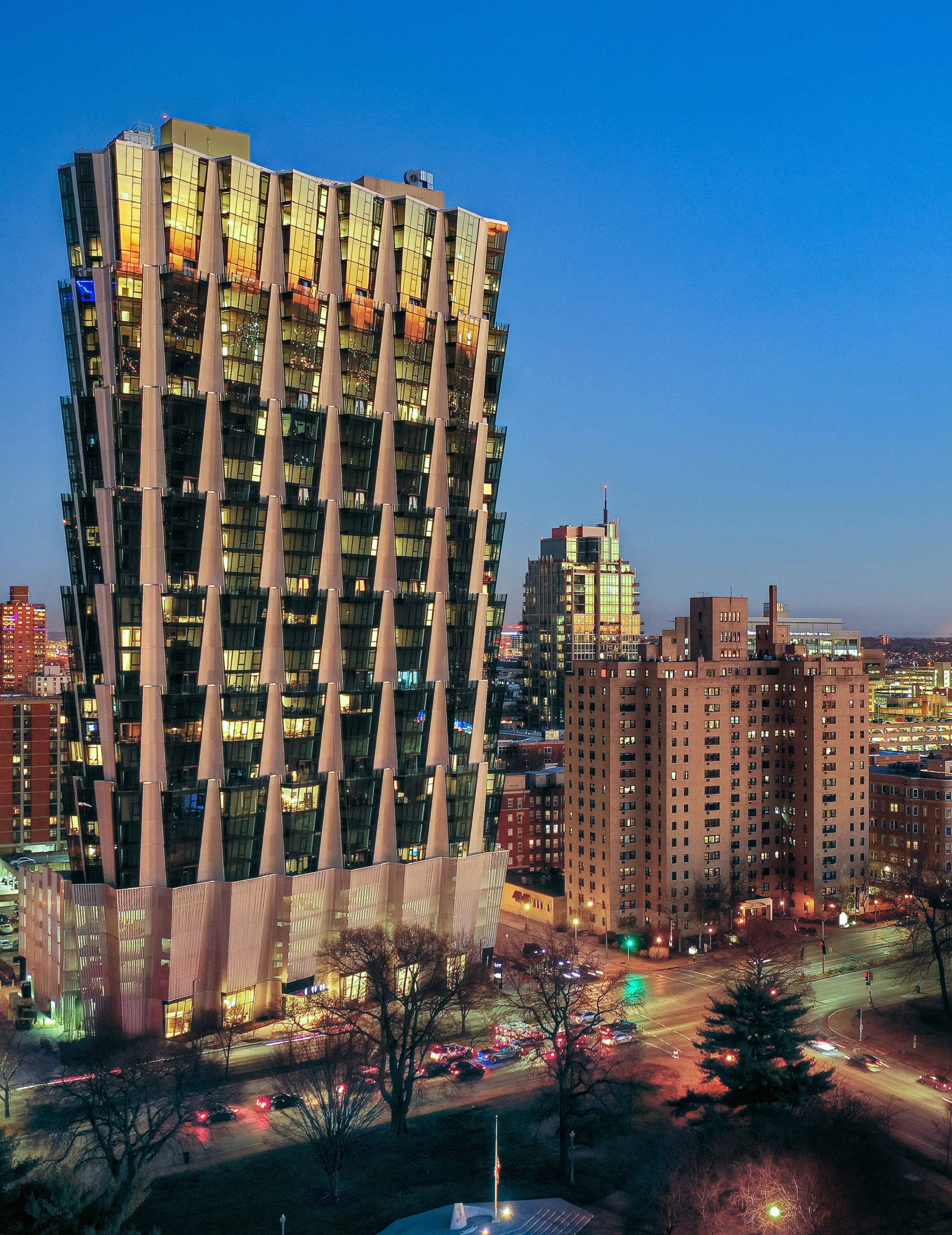 Above a horizontal podium consisting of the ground floor, parking levels and an amenities level, the tower rises in a series of four- or five-floor cantilevered tiers. The facade of curtainwall and architectural metal is scalloped in plan and angled vertically to create generous outdoor spaces on top of each tier, providing terraces for a quarter of One Hundred’s 316 apartments, which range from studios to three bedrooms, as well as a shared amenity space for residents atop the green roof podium. The building offers its residents wide views of the city’s renowned Forest Park to the west and Gateway Arch to the east.

“Rooftop decks can be appreciated by everybody, but they’re often pretty empty,” explains David Fields, principal in charge of the tower’s design for Seattle-based structural engineering firm Magnusson Klemencic Associates (www.mka.com). “Penthouses have private decks, but they’re just for the owners. This project’s tiering—where every four or five stories it flares out and then comes back in—dramatically increases the number of places where people can be outside on what feels like a rooftop deck, because you don’t have another extended platform right above you.”

Working to enhance the opportunities provided by the site orientation and environmental forces, the Green Globes-certified building’s leaf-shaped plan and tiered massing improve its performance by providing self-shading and lots of cross ventilation, thereby reducing overall energy load and increasing occupant comfort. Each apartment features its own corner living room with double exposures that, in addition to offering panoramic views, enhance the amount and quality of daylight within the units. The building’s design also provides niches for public and retail spaces to occupy outside the building at ground level, adjacent to the park, and in doing so defines a wider, more generous public streetscape, strengthening pedestrian connections between the Central West End district and Forest Park.

The structure’s complicated geometry necessitated an equally complex construction phase. Through it all, creativity was key to the project’s success. For example, slab pours were completed every seven days by “flying in” preconstructed formwork with a tower crane, enabling the construction team—led by Clayco (www.claycorp.com) as the general contractor—to complete each slab formwork in 24 hours rather than the three or four days typical of a conventional process. To ensure strict tolerances were achieved, the team used an abundance of laser scanning, 3D modeling and offsite preassembly. 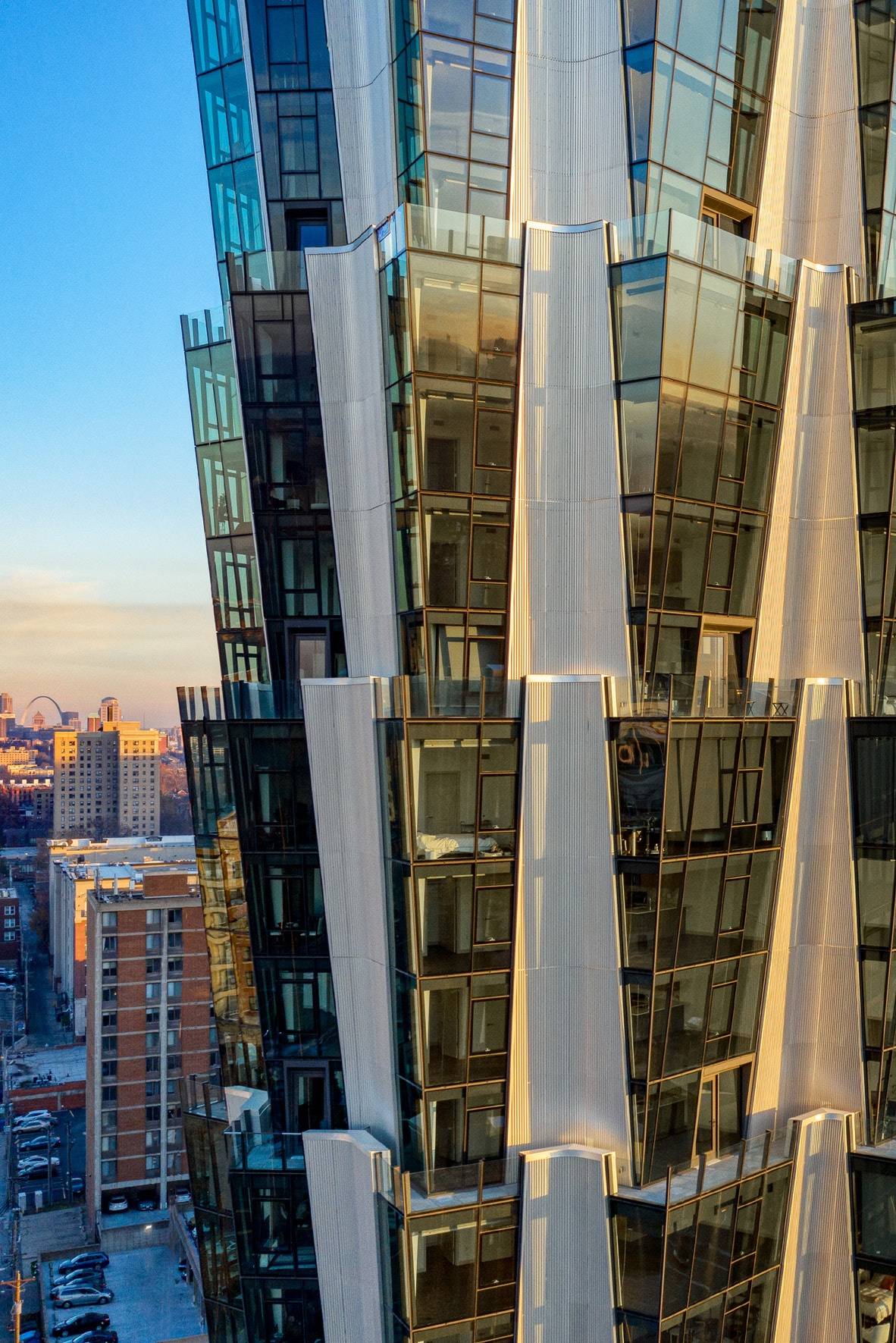 The building’s angled facade creates generous outdoor spaces on top of each tier, providing terraces for a quarter of the apartments as well as a shared amenity space for residents atop a green roof podium. (Sam Fentress, courtesy of Studio Gang)

The tower literally had to be wedged onto a 1-acre site along Kingshighway, so the maneuvering of cranes, equipment and material deliveries also necessitated a creative approach to scheduling as well as full transparency from every team member. When the project was completed, the team had constructed some 500,000 square feet of elevated concrete decks and 1,300 concrete risers, placed 23,000 cubic yards of concrete, and installed 850,000 linear feet of post-tension cables.

One Hundred’s design has no straight slab edges. The building’s glass curtainwall literally tilts outward, and each floor cascades to resemble a maple leaf—a design element inspired by the tower’s proximity to Forest Park. Because the curtainwall had to be premanufactured offsite, pouring slabs to meet a stringent 1-inch curtainwall tolerance was the project’s primary challenge. 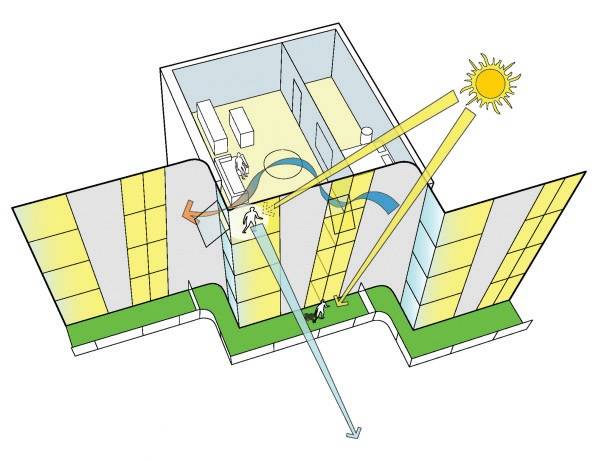 Each apartment features its own corner living room with double exposures that, in addition to offering panoramic views, enhance the amount and quality of daylight within the units as well as the opportunity for natural cross-ventilation. (Studio Gang)

Constructing a lifesize mockup of the curtainwall enabled the team to visualize window slopes and how they would transition with the units’ vertical terraces. Clayco’s design subsidiary, Lamar Johnson Collaborative (www.theljc.com), created a 3D model of the slab edges, and the team used GPS data to layout the decks from the project’s design drawings created by MKA using Revit building information modeling software from Autodesk (www.autodesk.com). Clayco’s own Virtual Design and Construction group then took 3D laser scans of the forms to ensure they were in sync. Additionally, MKA created an independent computer model using ETABS software from Computers & Structures, Inc. (www.csiamerica.com) to assess forces such as wind, seismic and gravity as well as evaluate how stress is distributed throughout the building’s structural frame down to its foundations.

“We had to set the entirety of the curtainwall first, then have our panel crew install the panels later from the exterior of the building (which leaned outwardly and at a radius),” says Clayco Project Director Erick Todd. 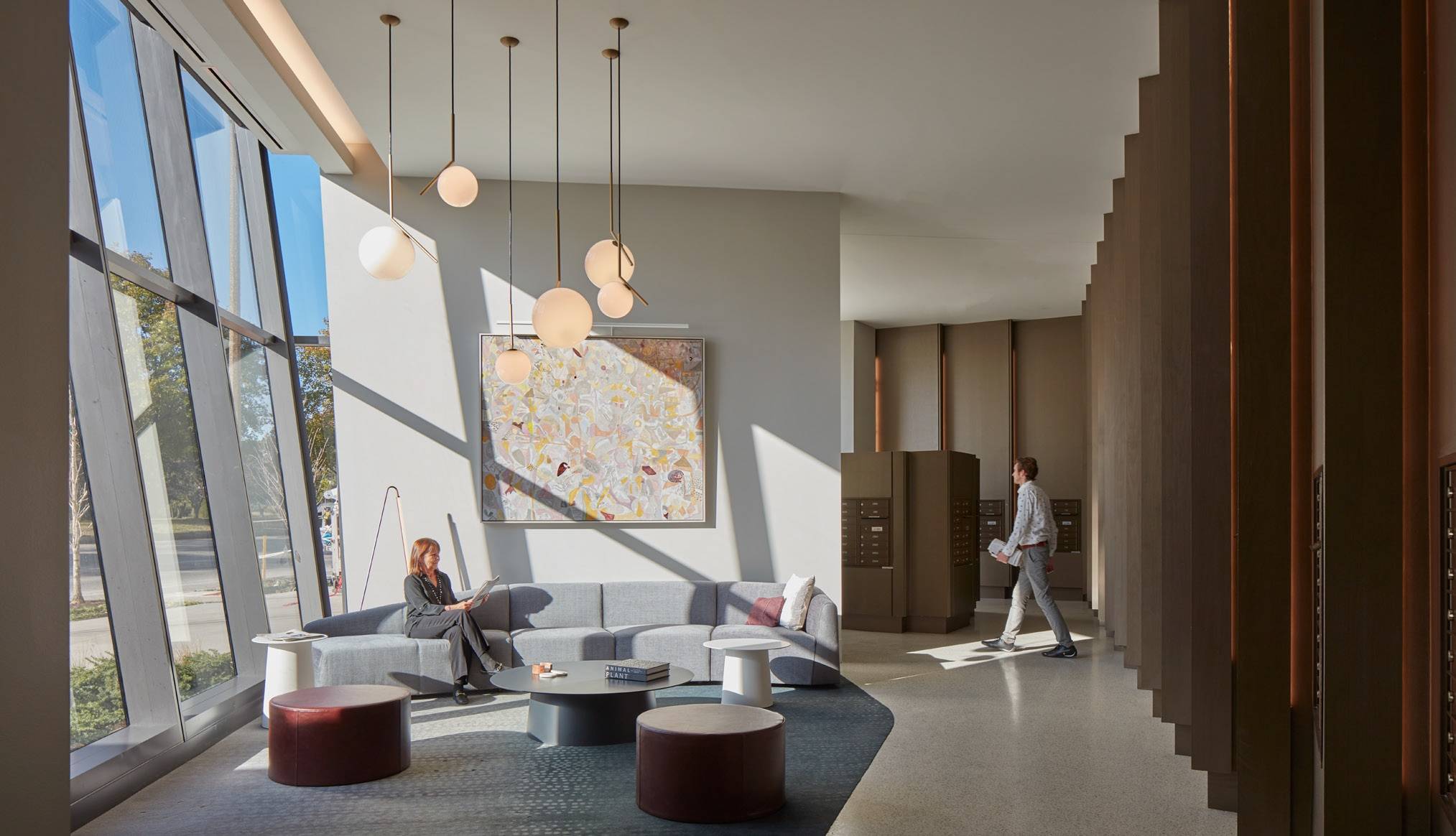 Clayco designed an elaborate swing-stage system that followed the slope of the glass. Custom brackets were mounted to every balcony floor and leaned with the building. At one point, there were 21 swing stages working simultaneously. The 4- by 8-foot panels were carted through the building’s middle and then attached to a curved rail system to give them their shape.

During foundation work, rock depth was found to have even higher variability than predicted by the geotechnical report due to an erratic strata of rocks, rubble and unstable soil. The team lost two months as it maneuvered five rigs across the diminutive site to drill dozens of piers. Rebar cages for drilled piers—prefabricated to match the predicted rock depth—couldn’t be used as expected in all locations, as the rock was as deep as 80 feet in some areas. The team had to pump slurry to prevent the holes from collapsing. 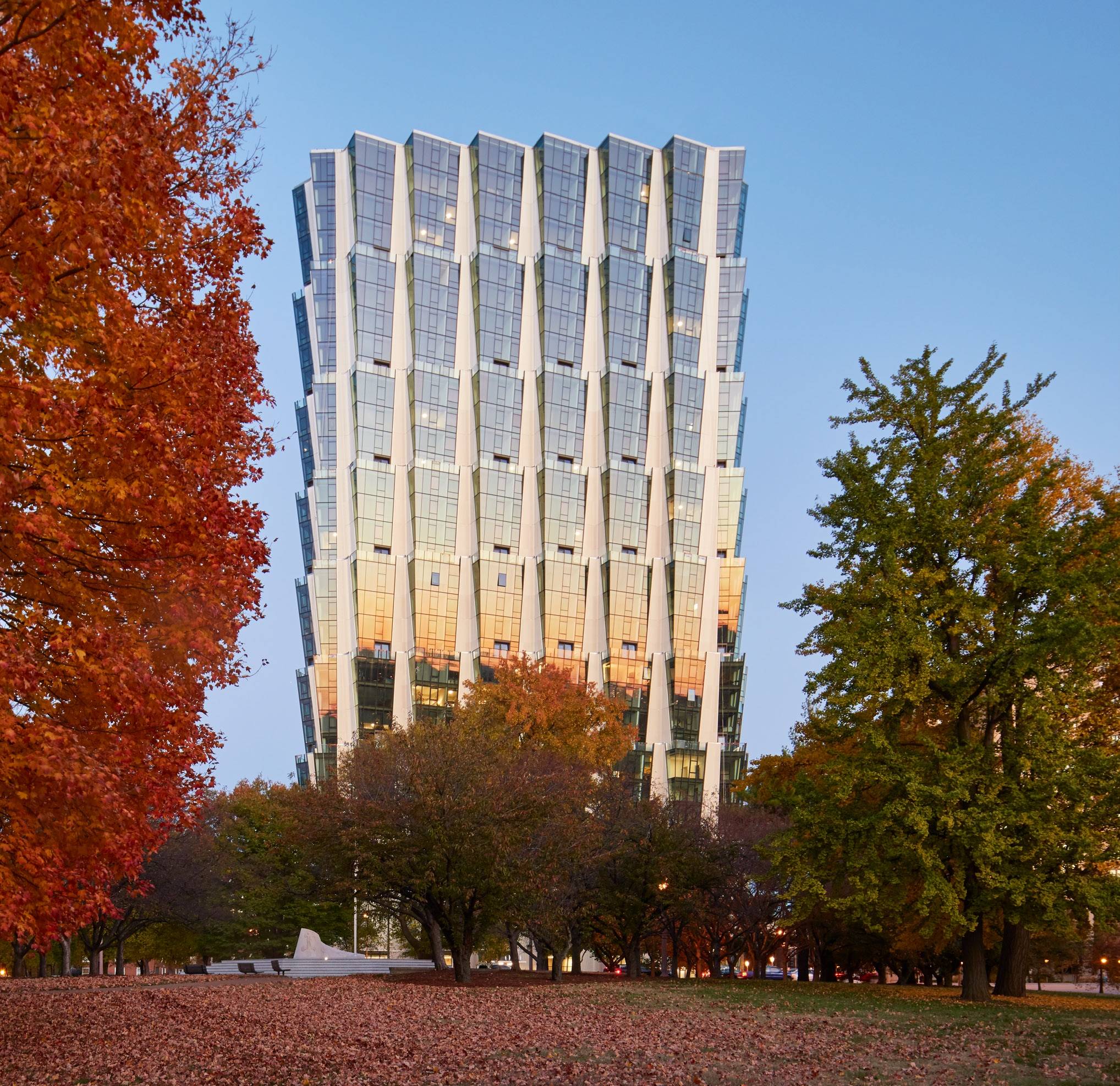 The building’s expanses of glass reflect the changing light and weather in Forest Park, providing a dynamic backdrop for foliage and snowfall alike. (Tom Harris, courtesy of Studio Gang)

The residential tower is close to North Kingshighway Blvd., so it was imperative that nothing be dropped from one of the upper floors—tools, cellphones, hardhats, etc. To minimize the hazard, Clayco implemented a 100-percent tool-tethering requirement for any worker within 15 feet of the slab edge. It was tedious at times—some team members had up to five tethers on their belt—but a full-time staffer walked the site daily to ensure the requirement was followed by every subcontractor.

As an additional precaution, the team installed an elaborate floor netting system. Throughout the project, multiple trades were working simultaneously at nearly every level; one crew might be pouring concrete on an upper floor while another installed curtainwall six floors below. Therefore, full-time spotters were strategically positioned, and foremen used radios for communication.

“It was a logistical challenge just keeping the guys out of danger from the work above,” says Todd. “Everyone was working vertically on top of each other, so just keeping everyone out of the line of fire was a big deal.”

During metal panel installations, Clayco performed daily inspections of the swing-stage rigging and required every crew member to undergo task-specific training. Every stage had its own number, and the team would preplan each move. That was critical, as “each swing stage was moved some 150 times,” explains Todd. Clayco also stationed two full-time safety coordinators onsite—one exclusively for exterior work. The foreman of each exterior crew and concrete crew would participate in daily safety discussions in the Clayco office, reinforced by toolbox talks and pretask planning sessions.

The tower’s complex geometry and stringent tolerances made laser scanning the post-tensioned deck slabs essential. Clayco even took 3D scans of all rooms and walls to maintain a record of wall contents before finishing them and later turned them over to the owner as “as-builts.”

Transfer beams also were modeled, along with every slab penetration and embed. In fact, a single slab could have as many as 1,000 modeling points. A representative of Clayco’s Virtual Design and Construction group was in charge of the effort and worked full-time from the site when necessary.

“They captured every element, down to a quarter of an inch,” says Todd. “There are 500 embeds for every floor as well as post-tensioning cables, floor drains in the balcony, etc.”

For the first time, Clayco used an online platform that allowed subcontractors to schedule their own site deliveries, a capability that was critically important because there were some 30 deliveries a day and no laydown areas. According to Todd, a trade partner would schedule all its deliveries on a calendar in the Cloud, then Clayco superintendents would analyze and approve or reschedule each delivery.

When COVID-19 struck in March 2020, Clayco’s response was proactive and expedient, and the company shared its response plan with competing contractors, working 24/7 to get the plan in place and implement protocols on the fly. The project team lost only a single day of work because of the pandemic. 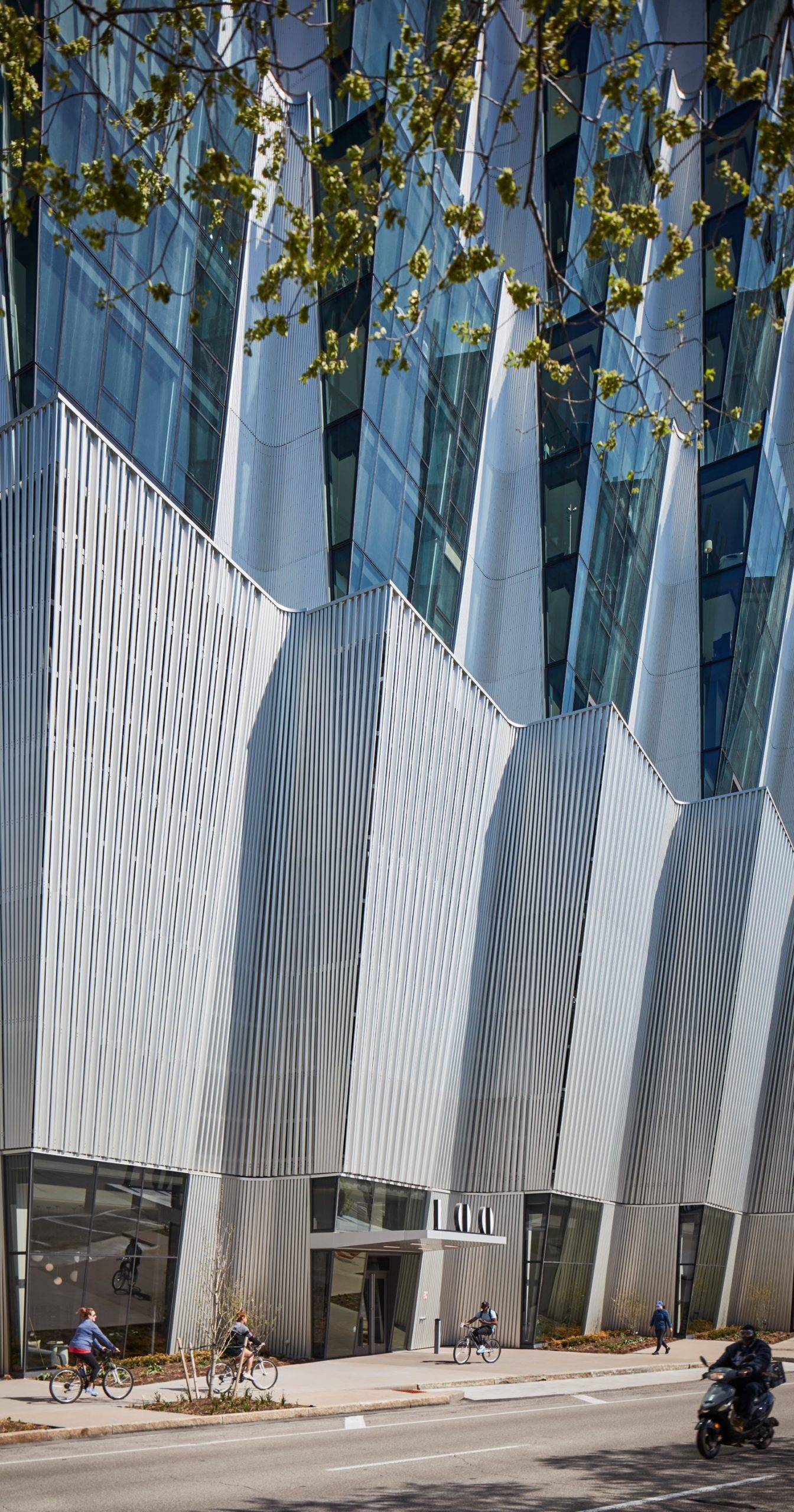 Early in design, Clayco suggested eliminating two below-ground basement levels, proposing instead that the team construct an additional level of above-ground parking and reconfigure the other remaining levels. Together with Lamar Johnson Collaborative, Clayco sketched out the idea and gave it to Studio Gang for redesign. The value-engineering exercise reduced the project duration by months and shaved substantially from the project cost.

“There was a fairly high and unpredictable water table that would likely have been problematic and time-consuming,” says Clayco’s Matt McKenna, vice president of residential construction.

In another value-engineering aspect of the project, Clayco prefabricated and preloaded most of the interior walls with all the mechanical, electrical and plumbing (MEP) components for the residential levels. Laser scanning and 3D modeling were critical during the process to meet tolerances. To further reduce the owner’s risk and expedite the schedule, Clayco brought in Kalkreuth Roofing & Sheet Metal (www.krsm.net) early in the project to help with the delegated design of the exterior metal panels and garage purlin systems.

Through it all, quality control was reinforced by Clayco’s Technical Assurance Group (TAG), which visited the site weekly to water test the facades and inspect the panels and MEP systems to ensure they were installed per design. TAG also performed design-assist services during the metal panel facade system and frequently offered value-engineering suggestions.

In 2015, the northeast corner of St. Louis’ West Pine and Kingshighway boulevards was a parking lot. Now open and occupied, One Hundred stands in its place. The 518,000-square-foot residential tower is the tallest building in the Central West End, with interior spaces that epitomize modern luxury and expanses of glass that inspire awe from every angle.

One Hundred Above the Park Rising 36 stories Studio Gang