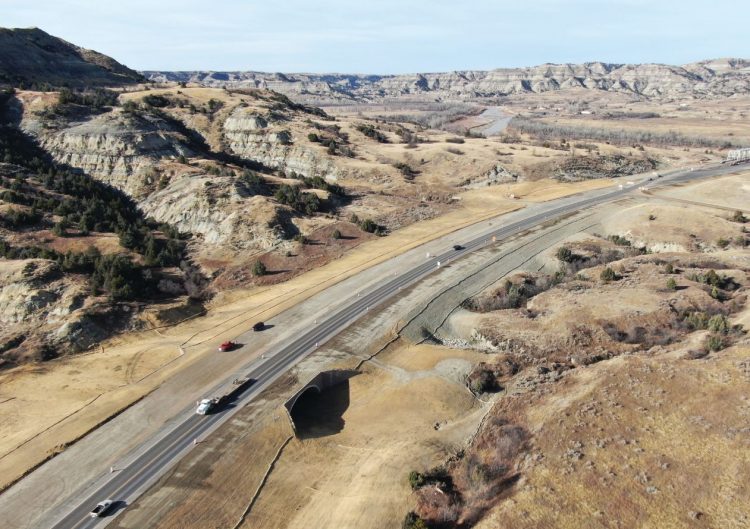 To help reduce wildlife-vehicle collisions and protect North Dakota’s bighorn sheep population, a wildlife underpass was completed recently as part of a $38.5 million project along U.S. 85 that replaced the historic Long X Bridge over the Little Missouri River south of Watford City.

From the American antelope to white-tailed deer, every western U.S. state has migratory big game herds, and many of these migrations cross a major transportation corridor. The loss can be hundreds of animals each year as they migrate in the fall and again in the spring. This presents a real danger to human safety as well as wildlife survival. State and local transportation agencies are looking for ways to meet the needs of the traveling public, maintain human safety and conserve wildlife.

Wildlife crossing structures are the key to getting these animals across highways safely, sometimes reducing the number of animals lost by as much as 90 percent as well as reducing damage to vehicles and human injuries. The proven success of such structures prompted the North Dakota Game and Fish Department (NDGFD) and the North Dakota Department of Transportation (NDDOT) to construct a wildlife crossing near the North Unit of Theodore Roosevelt National Park—bighorn sheep country in western North Dakota, where wildlife-vehicle collisions have been a problem for decades.

“Where we go through the Badlands area of this project, we have quite a few species that were a concern, including bighorn sheep, which is the main one, along with mule deer and white-tailed deer, elk, and smaller wildlife such as coyotes and mountain lions,” says NDDOT Biologist Greg Schonert. “This crossing is a great way to minimize wildlife impact.”

Schonert worked on the environmental impact statement for the estimated $479 million project, which will ultimately turn a 62-mile segment of U.S. 85 from a two-lane highway into a four-lane highway, running from the I-94 interchange near Belfield to the Watford City Bypass. The wildlife crossing was completed recently as part of a $38.5 million phase of the project that replaced the historic Long X Bridge over the Little Missouri River south of Watford City.

Built in 1959, the Long X Bridge is used by approximately 4,200 vehicles every day, but its Warren through-truss design limited many oversized vehicles and heavily laden semis from using the highway. The new bridge, which was built approximately 25 feet east of the existing bridge and retains the original name, is a concrete girder bridge supported by 60 precast concrete “I beams.” The bridge will have no height restrictions and four, 12-foot driving lanes that allow for larger, wider truck loads. 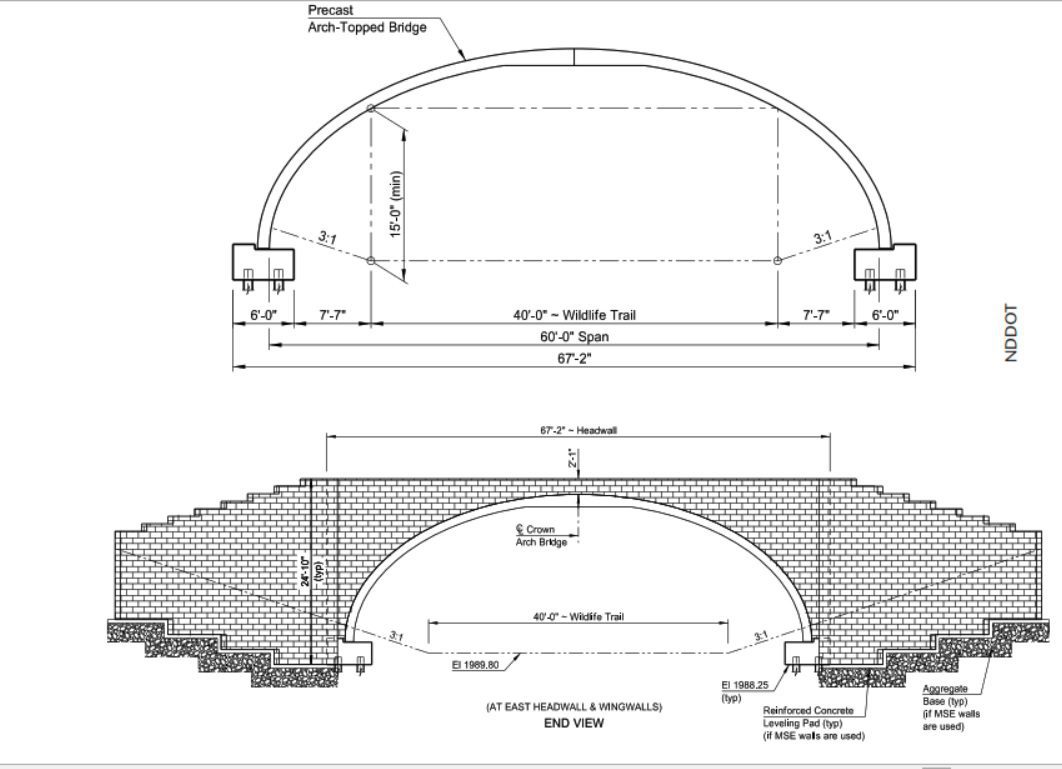 Underpass arch (top) and wall (middle) drawings illustrate the structure’s construction details. At 150 feet long, the 40-foot-span by 15-foot-rise structure provides enough openness and light to entice bighorn sheep to pass through it.

Currently, the Long X Bridge is only open to two lanes of traffic, with contractors, led by Ames Construction, working through the next year to dismantle and remove the old bridge before continuing work on the final two lanes. The first phase of the project involved widening the roadway on the southbound lanes on the north side of the bridge and building a temporary alignment at the wildlife crossing, an underpass located about 900 yards south of the new bridge.

NDDOT, NDGFD and Ames Construction partnered with Contech Engineered Solutions, a Quikrete company, to design and provide all the materials for the wildlife crossing, which included a 60-foot-span by 18-foot-rise precast BEBO arch and Keystone mechanically stabilized earth (MSE) retaining walls for the end walls. The structure needed to accommodate U.S. 85 grading over the top and the wildlife trail elevation under the roadway, with enough fill between the top of the structure and the roadway to handle highway loading and dampen sound under the structure. The wildlife crossing also needed a 40-foot-span by 15-foot-rise interior clearance to accommodate passage of the area’s bighorn sheep population—about 350 animals.

“We found a good location where we know the sheep cross the highway, and we’re confident the wildlife crossing was designed and built in a way that it’s going to be used by bighorns,” says Schonert. “The wildlife crossing is about 150 feet long, but it’s wide enough and tall enough so bighorns can see through it and feel comfortable enough to cross the highway there.”

Contech’s Tim Miller, the company’s North Dakota area manager, worked on the project from design development to installation. The company has extensive experience with wildlife crossings in several states, so Miller and the company’s design team selected materials known for their ability to be installed rapidly with minimal disruption to highway traffic and animal migration routes. The wildlife crossing construction with both phases was completed in four months in summer 2020.

Considering the wildlife crossing’s 60-foot span, the team used a Contech twin-leaf BEBO precast arch system, a combination of cast-in-place concrete footings, precast arch elements, headwalls and wingwalls. The system has been used in some of the largest precast arch spans in the world, using the fundamentals of soil-structure interaction to achieve strength and stability. Materials for the project’s headwalls and wingwalls were provided by Keystone Retaining Wall Systems, a Quikrete company.

“The Keystone MSE retaining wall system is a more cost-effective end treatment than other wall systems, and it works well with the BEBO arch,” explains Miller. “The Keystone dry cast blocks used in this area need to go through freeze-thaw testing because of the freeze-thaw cycles that occur in the winter months. This was a requirement in the project’s specifications.”

Because the wildlife crossing was built across the entire width of U.S. 85, the project proceeded in two phases, including an intermediate traffic switch to maintain two-way traffic on U.S. 85 during construction. The first phase entailed detouring the highway to the west and installing 15 rings (30 pieces) of the arch—about 90 feet of the structure. The team also built the Keystone retaining walls on the east end and a temporary wire wall on the west end of the span. 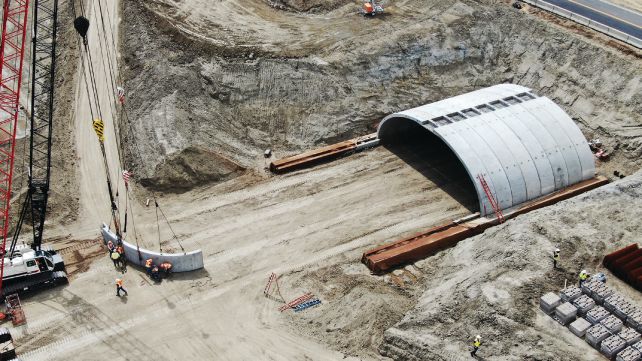 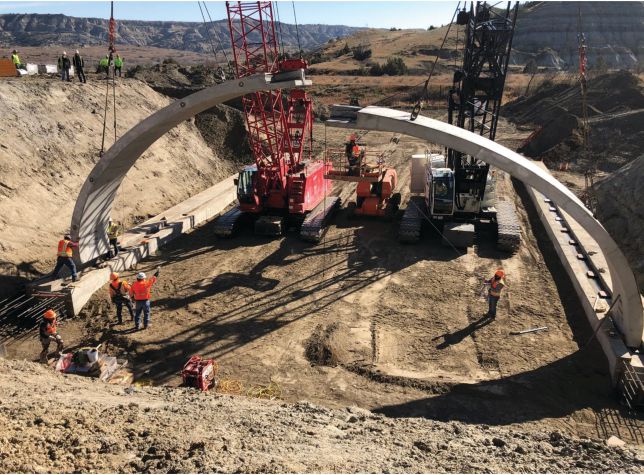 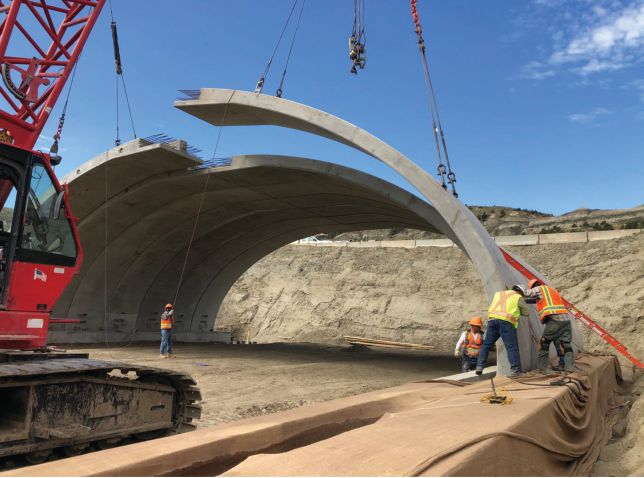 Each ring (or pair of half-arch elements) was installed on opposite, parallel, pile-supported footings. In the center of the span, each of the two half arches have a recessed cavity with temporarily exposed reinforcement. The elements are bolted together, lap splice reinforcing bars are installed, and the cavity is filled with high-strength concrete to complete the connection.

“It’s a very modular structure,” relates Dan Wasniak, national director of Precast Bridge at Contech. “You bring the two pieces together and do some fill construction, and it becomes like a Lego set. It worked well with the project’s phased construction.”

The approach allowed the team to complete first-phase elements of the structure in three days. The permanent Keystone wall and temporary wire walls were built in conjunction with the BEBO arch backfill placement. The roadway then was detoured over the top of the new structure so the remaining 10 rings (20 pieces) of the arch could be put in place and the west permanent Keystone walls could be completed. 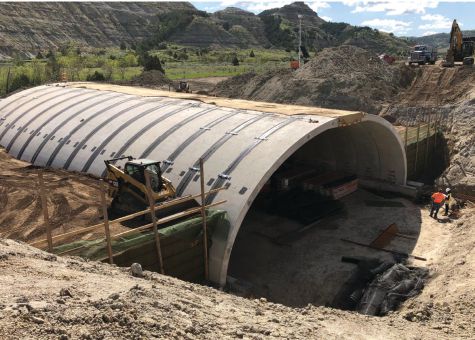 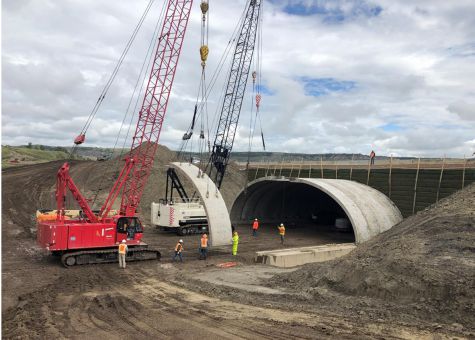 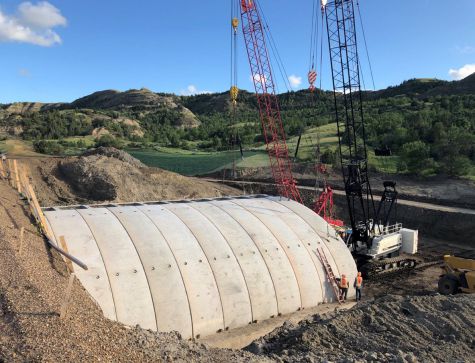 The project’s second phase involved detouring the roadway over the top of the new structure so the remaining 10 rings (20 pieces) of the arch could be put in place and the permanent Keystone walls could be completed.

The temporary wire walls and permanent Keystone Compac walls were provided in one package. Although the walls are made from dissimilar materials, they require similar installation techniques to make construction more uniform. Multiple layers of Mirafi geosynthetic reinforcement were used to reinforce the soil used as infill. Post-construction soil settlement was a concern during the design phase, so a control joint was built into each headwall where it transitions off these deep-foundation structures onto the wingwalls.

“The BEBO arches and the Keystone headwalls above them are founded on piling that extends to bedrock to limit structure movement,” explains John Schramm, sales manager at Keystone. “But the wingwalls are placed on improved soil. So right at the junction between the headwalls and wingwalls is where we placed the control joint, which will allow that potential differential settlement to occur.”

Although the wildlife crossing has been in place for only a few months, Schonert has already seen tracks through it. Fencing will be installed in the spring along both sides of the highway to channel wildlife into the crossing.

“It takes a couple of years for animals to get accustomed to going through a structure like this because they’re so used to going across the highway,” he says. “But the fact we’ve already seen tracks through it is pretty amazing. From a sheep’s perspective, I’m hoping it looks warm and inviting, not like a dark, scary tunnel. “We’re looking forward to getting trail cameras working and the fencing installed to get full use out of it.”

According to NDDOT, the Long X Bridge will have all four lanes open to traffic this summer. The highway’s new wildlife crossing will keep the area’s native species out of harm’s way.