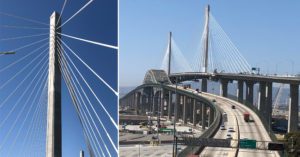 LONG BEACH, Calif. – The Port of Long Beach and Caltrans officially dedicated the new Gerald Desmond replacement bridge in Long Beach with a virtual opening ceremony on October 2. Motorists can access the new bridge beginning the morning of October 5. The new bridge offers several improvements, including three lanes in each direction with wide shoulders for improved traffic flow.

HNTB originally was hired by the Port of Long Beach to study and develop alternatives leading to the first vehicular cable-stayed bridge in California. It was envisioned as the first signature span bridge in the region and an iconic bridge for Long Beach. HNTB performed conceptual and preliminary design and owner’s engineer responsibilities for the new 2,000-foot-long cable-stayed bridge for the joint owners POLB and Caltrans. The new bridge has two single mast towers at the middle of the roadway, and at 165 feet, the bridge is one of the widest cable-stayed bridges in the world.

After completion of preliminary design, the owner elected to use the design-build delivery method. After the D-B contract award, HNTB assumed the role of owner’s engineer, performing independent service loads design, seismic and blast analysis and design; review of engineer of record design submittals; and construction support services such as reviewing contractor work plans, submittals, requests for information, design change notices and field change notices, in addition to helping the Port and Caltrans with claim review and defense.

“Opening the new bridge completes a vision that began many years ago,” said Semyon Treyger, PE, SE, HNTB vice president and Northwest Division bridge practice leader and bridge design manager for the project. “A new solution was needed for traffic on the bridge and on the water below. Through insightful and collaborative efforts and application of technical excellence, this bridge has become a shining example of progress for the region and a model for other cities around the world.

The original bridge was built in the 1960s and was not designed to accommodate today’s larger cargo ships or the dramatic increase in trucking traffic with the growth of the Port. The new replacement bridge spans the Port of Long Beach’s Back Channel with a deck rising 205 feet above the water. The cable-stayed bridge includes additional traffic lanes, including slower truck climbing lanes, a higher clearance to accommodate larger cargo ships such as Panamax, and a dedicated bicycle path and pedestrian walkway, including scenic overlooks. With two towers reaching 515 feet into the sky, it is the second-tallest cable-stayed bridge in the United States.

“The new bridge will have a tremendously positive effect on the mobility of Southern California,” said Wayne Feuerborn, HNTB West Division president. “Whether people are traveling on the water, in trucks or cars, on bicycles or on foot, the new bridge is better able to serve the needs of this rapidly growing region. HNTB would like to congratulate the Port, Caltrans, the 3,000 workers who constructed the new bridge, and the people of California on the completion of this transformative infrastructure project.”

The Gerald Desmond Bridge Replacement Project is a joint effort of Caltrans and the Port of Long Beach, with funding contributions from the U.S. Department of Transportation and the Los Angeles County Metropolitan Transportation Authority.