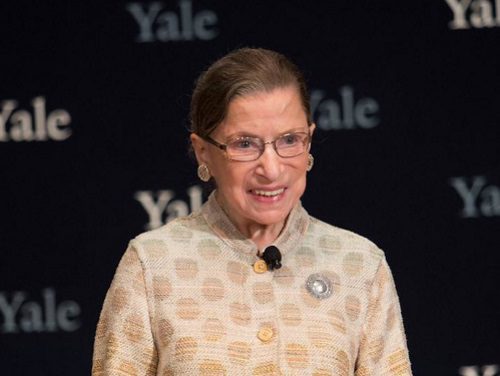 As reported by the AASHTO Journal: https://aashtojournal.org on September 29, 2020 - in News, People

Supreme Court Justice Ruth Bader Ginsburg, who passed away on September 18 after an 11-year battle with pancreatic cancer, was involved in several major transportation legal cases during her time on the nation’s highest court – most of them coming near the end of her formidable 27-year Supreme Court tenure.

[Above photo by the Yale University Law School.]

In 2011, Ginsburg authored the majority opinion in the 5-4 decision regarding CSX Transportation v. McBride, which reaffirmed a lower court decision that the Federal Employers’ Liability Act does not require proof of “proximate causation.”

That meant juries can be informed if a defendant railroad caused or contributed to a plaintiff employee’s injury if the railroad’s negligence played any part in bringing about the injury.

She also authored the majority opinion in another railroad case: the 7-2 decision in 2019 regarding BNSF Railway Company v. Loos, which found that damages for lost wages are “compensation” under the Railroad Retirement Tax Act and thus are subject to employment taxes.

Also in 2019, Ginsburg joined Justice Neil Gorsuch in his concurring opinion with the majority regarding the 5-4 decision in Washington State Department of Licensing v. Cougar Den, Inc.

That case revolved around Cougar Den, Inc. – a fuel distributor owned by the Confederated Tribes and Bands of the Yakama Nation – and an assessment it received from the Washington State Department of Licensing that demanded a total of $3.6 million in unpaid taxes, penalties, and licensing fees for transporting fuel across state lines without a license.

The Supreme Court ruled in that case that the Yakama Nation Treaty of 1855 preempts the state law for taxing fuel purchased by a tribal corporation for sale to tribal members.