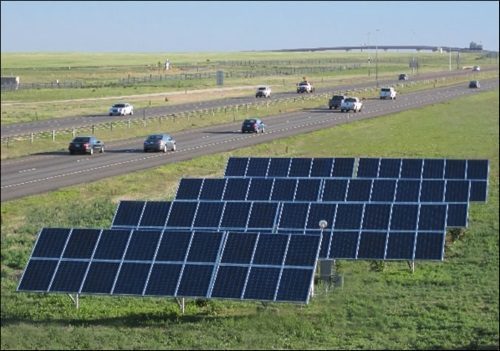 As reported by the AASHTO Journal: https://aashtojournal.org on September 29, 2020 - in Financial, News

The Ray – a corporate venture devoted to roadway technology testing – and the Webber Energy Group at the University of Texas-Austin recently released a study that indicates state departments of transportation could generate roughly $4 billion in “economic value” by establishing solar energy arrays in highway rights-of-way (ROW) locations.

[Above photo by the Federal Highway Administration.]

According to the Webber Energy Group’s analysis, most states are home to more than 200 miles of interstate ROW suitable for solar energy development, which combined could generate up to 36 terawatt hours (TWh) per year of clean energy.

Individually, most states have interstate solar potential in the thousands of gigawatt hours (GWh) per year, the study claimed. At a typical retail price for electricity of roughly 10 cents per kilowatt-hour (KWh) and a wholesale price of two cents per KWh, this means states could generate carbon-free electricity with millions of dollars’ worth of value – anywhere from $2.5 million to $181.4 million annually, the group’s research indicated.

The Webber Energy Group added that state DOTs can also take advantage of operational cost savings – such as through reduced roadside maintenance and reduced energy costs – and even build new revenue streams over the lifetime of such solar array projects, which could be 30 years or more.

“On day one of these projects, state DOTs win,” emphasized Laura Rogers, director of strategic partnerships at The Ray. “State DOTs have a lot of options when structuring ROW renewable energy projects.”

Depending on their priorities and goals, state DOTs can own the renewable energy system and use or sell the clean energy generated, she said – or they can work with a solar developer who owns the system and collect a land fee, while at the same time transferring land maintenance obligations to that developer.

“No matter how they decide to structure the deal, state DOTs win on all fronts by optimizing underutilized land to generate clean renewable energy that benefits their communities, the environment, and their budgets,” Rogers added.

To help states capitalize on that potential economic value, The Ray and the Webber Energy Group are creating an interactive web-based tool to help state DOTs map out potential highway ROW locations for solar energy arrays.

Because exits have more room to accommodate the transportation safety requirements, such as safety setbacks, they are ideal locations for solar development, the report noted.

“As our transportation systems become smarter and electrified, we will need more energy available, closer to the interstate and interstate exits, and more funding to support the infrastructure demands,” she said. “By enabling renewable energy generation using the idle roadsides, our state DOTs can help to fill this gap.”