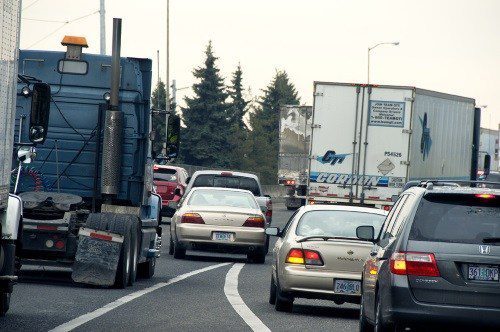 As reported by the AASHTO Journal: https://aashtojournal.org on August 27, 2019 - in News, Transportation

Gridlock on America’s roadways is increasing, according to the 2019 Urban Mobility Report published by the Texas A&M Transportation Institute – in part due to job growth that is “exacerbating” the nation’s traffic woes.

The United States added 1.9 million jobs from 2016 to 2017, TTI note in its report – slower growth than the 2.3 million-plus growth in four of the five previous years, but more than enough keep pushing vehicle traffic volumes upwards.

[Above photo by the Oregon Department of Transportation.]

The group added that its data – gathered from 494 urban areas across all states and Puerto Rico and supported by INRIX, a provider of transportation data and analytics – extends back to 1982.

Since that time, the number of jobs in the nation has grown almost nonstop by just over 50 percent to 153 million currently – adding that the 2008–2009 recession produced only a brief pause in traffic congestion growth, which bounced back at an even quicker pace than the associated job recovery.

“No single approach will ever solve this complex problem,” said Tim Lomax, a report author and TTI regents fellow, in a statement. “We know what works. What the country needs is a robust, information-powered conversation at the local, state, and national levels about what steps should be taken. We have many strategies; we have to figure out the right solution for each problem and a way to pay for them.”

That includes squeezing as much efficiency out of the existing system as possible, reducing demand through telework, better balancing demand and roadway capacity by adjusting work hours, smarter land use, and building “more of everything” when it comes to transportation infrastructure – roads and transit system capacity alike.

Simply put, travel demand is growing faster than the system’s ability to absorb that demand, the report noted. “The problem affects not only commuters, but also manufacturers and shippers whose travel delay costs are passed on to consumers,” explained Bill Eisele, a report author and TTI senior research engineer.

For example, “while trucks constitute only 7 percent of road traffic, they account for 12 percent of congestion cost,” he said.

“The value of investing in our nation’s transportation infrastructure in a strategic and effective manner cannot be overstated as these added costs impact our national productivity, quality of life, economic efficiency and global competitiveness,” noted Marc Williams, deputy executive director of the Texas Department of Transportation, which funded the TTI research. “Eventually, we’re talking billions of wasted hours, and the cost of delay at that scale is just enormous.”