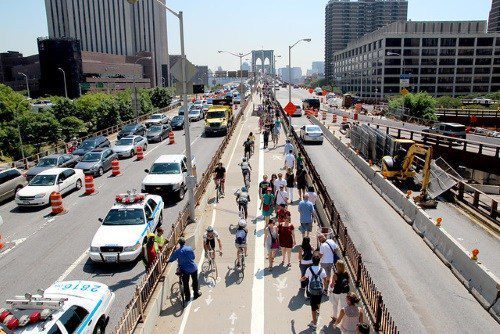 As reported by the AASHTO Journal: https://aashtojournal.org on August 27, 2019 - in Featured, News, Transportation

A new 24-page report issued by the National League of Cities on August 7 recommends congestion pricing as a key tool for “solving the growing infrastructure crisis in American cities, towns, and villages.”

[Above photo by the New York City Department of Transportation.]

It also notes that in U.S. cities with populations of 50,000 or more, 91 percent of residents commute by car, while in mid-sized cities, that figure hovers between 86 percent and 87 percent; dropping to 78 percent in large cities.

Clarence Anthony, NLC’s CEO and executive director, noted in a statement that congestion pricing is a type of road user charge or RUC system in which a flat or variable rate fee is charged to vehicles that drive in a specified area or zone within a city – a system that can help communities “properly price” use of existing roadways, which are a “finite, in-demand good.”

[The American Association of State Highway and Transportation Officials delved into this topic two years ago in the video below.]

“By piloting new technologies like congestion charging systems, local leaders have the opportunity to find ways to sustainably improve conditions on and around America’s roads,” he explained.

“These models are built on a basic economic concept: When a public good is in high demand, the price charged to use that good increases to reflect its value and thus, what users are willing to pay to use it,” Anthony noted. “[And] most of these systems will be used to fund transit and infrastructure.”

Forms of congestion pricing are already being deployed by states on highways and bridges across the country.

For example, the Virginia Department of Transportation has also been operating the “dynamically tolled” Interstate 66 expressway in Northern Virginia for nearly two years now, with rates that fluctuate based on traffic volumes, while the Washington State DOT opened high occupancy toll or HOT lanes on SR 167 in 2008, with toll rates adjusted to ensure traffic in the HOT lane remains “free-flowing” even when the regular lanes are congested.