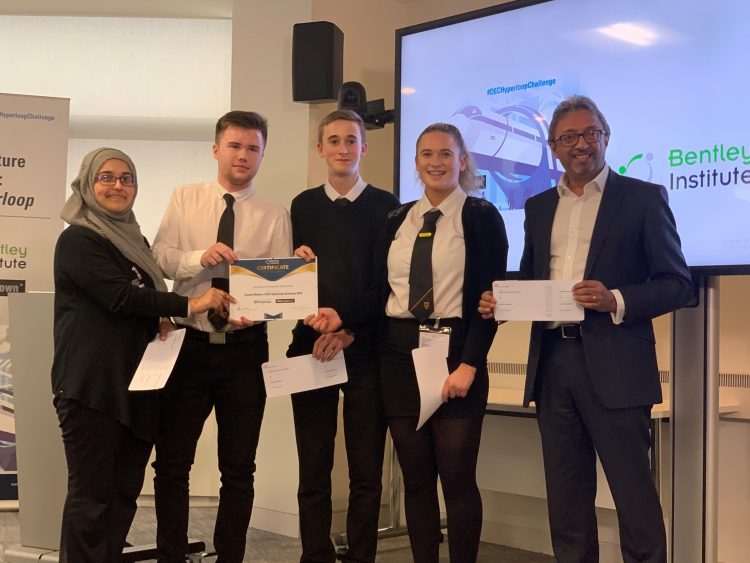 LONDON – 11 April 2019 – Bentley Systems, the leading global provider of comprehensive software solutions for advancing the design, construction, and operations of infrastructure, announced Drummond Community High School of Edinburgh, Scotland as the winning team of the first ever Future Infrastructure Challenge: DEC Hyperloop, which took place April 7 through 9. Hosted by Bentley Institute and Class of Your Own, the challenge included sixth form students, ages 16 to 18, from four schools in the UK whose assignment was to conceptualise a design of a hyperloop transport system and stations for Singapore.

Students from participating schools, The Cardinal Wiseman Catholic School from Greenford, London; Drummond Community High School from Edinburgh, Scotland; King Ecgbert School from Sheffield, South Yorkshire; and More House School from Farnham, Surrey, travelled to Bentley Systems’ offices in London on April 7. They were tasked with creating the hyperloop concept and a presentation to convey their cohesive plan to a judging panel.

The overall winners of the challenge are students from Drummond Community High School, Faye Fulton, Ryan Gordon, Alizah Mughal, and Wiktor Rauba, led by DEC (design, engineering, construction) teacher, Mark Holden. The winning team members and their teacher were awarded a complimentary trip to Singapore from Bentley Systems to attend its annual Year in Infrastructure Conference, which will be held this year October 21 through 24 at the Marina Bay Sands Resort in Singapore.

The four participating schools were selected from 100 schools studying the Class of Your Own Design Engineer Construct! (DEC) learning programme, which is intended to educate students about and encourage exploration of careers in architecture, engineering, and construction.

In the spring of 2018, following meetings with students studying DEC at a higher or advanced level, the four schools were invited to enter teams to take part in the first Future Infrastructure Challenge to mark the 10th anniversary of Class of Your Own. Delivered in partnership with Bentley Systems, the programme will be released as a full curriculum for schools around the world later this year.

Mark Holden, teacher for the winning team, said, “Drummond High School is committed to nurturing big ambition in its students and equipping them for the world and workplace of tomorrow. The school became involved in the DEC curriculum after seeing its success – and the attributes of its students – from across England and recognising how closely this fit our own aims. We have enjoyed several years of unparalleled opportunities and great successes and are delighted that this has led to this collaboration with Bentley and COYO. The development of our team has been incredible to watch, but also the effect on the school community as a whole has been palpable. Knowing that students from our school are taking part in such a huge project, working with such esteemed professionals on this scale is a constant reminder to all of our students of what they can achieve.”

Over the two days prior to the presentation day, the students created their designs using laptops and software provided by Bentley Systems at the offices of four globally recognised companies: Arup, Rogers Stirk Harbour and Partners, Turner Townsend, and WSP.

On April 9, the teams presented their concepts to a distinguished panel of judges:

Harj Dhaliwal, managing director Middle East and India of Virgin Hyperloop One, said, “We can’t solve 21st century challenges with 19th century technology. As the first new mode of transportation in over 100 years, hyperloop is changing the narrative for mass transportation. It’s great to see the next generation of engineers and designers embracing this technology and the new type of thinking it requires. I have been overwhelmed by the approach to innovation and the out-of-the box thinking the young students have demonstrated. All of them are winners today.”

The teams’ concepts were judged according to feasibility and quality of design, social and economic impact, building efficiency, sustainability, originality, and quality of the presentation.

Chris Barron, chief communications officer for Bentley Systems, said, “It has been a pleasure hosting these talented students, seeing their hyperloop designs, and watching their excellent presentations. It was, in a word, inspiring, not only because of the depth of research they performed, and the thoughtfulness of their designs, but also because they demonstrated that the next generation of infrastructure professionals are ready to face the challenges of advancing our economy and sustaining our environment. Bentley is committed to supporting STEM learning programmes like Class of Your Own, which inspire and challenge students to think creatively about the future of infrastructure and to perhaps even pursue careers in infrastructure-related fields. We’re looking forward to hosting more events like this around the world.”

Additional awards of £350 to be donated in the name of the students and the school to a local, national, or international charity of their choice were given in the following categories:

Alison Watson, CEO and founder of Class of Your Own, said, “DEC has produced some incredible digital talent thanks to great teachers and support from industry. After 10 years, I felt it was time to ramp up the challenge and write a new curriculum that takes students, and their teachers, to another level of learning. I’ve watched these four teams grow in so many ways as they’ve developed their designs and in truth, all are champions. The students can now look forward to showing the world what young people can do when given the opportunity to learn in a real-life environment. I couldn’t be more proud of these young role models and thank the Bentley team for their unwavering support of COYO and our schools to make this happen.”

About Class of Your Own

Class of Your Own Limited (COYO) is an award-winning consultancy specialising in education for the digital built environment. Established in 2009, COYO has been delivering the ground-breaking Design Engineer Construct! learning programme in addition to workshops, challenges and other student engagement programmes to schools and colleges across the United Kingdom. Class of Your Own develops innovative, contextualised approaches to teaching and learning that enable young people from all backgrounds to explore aspirational career pathways in architecture, engineering, surveying, and construction.

Bentley Systems is the leading global provider of software solutions to engineers, architects, geospatial professionals, constructors, and owner-operators for the design, construction, and operations of infrastructure. Bentley Systems employs more than 3,500 colleagues, generates annual revenues of $700 million in 170 countries, and has invested more than $1 billion in research, development, and acquisitions since 2012. www.bentley.com

Bentley and the Bentley logo are either registered or unregistered trademarks or service marks of Bentley Systems, Incorporated or one of its direct or indirect wholly owned subsidiaries. All other brands and product names are trademarks of their respective owners.