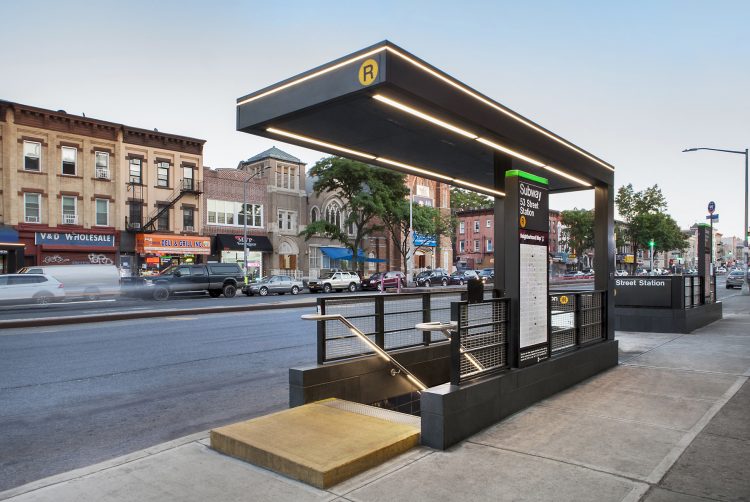 Brooklyn, NY – The Metropolitan Transportation Authority (MTA) and the Design-Build team of Urbahn Architects, HAKS, and Citnalta-Forte have completed renovations to the first three subway stations of the MTA’s multiple station renovation program. The design team for the $72 million, three-station package was a joint venture between the New York City-based architect and planner Urbahn and the engineering firm HAKS. The design team worked with the design-build contractor, Citnalta-Forte.

The 102-year-old 53rd Street Station, along with two other century-old Brooklyn R subway stations on the BMT Fourth Avenue Line – Prospect Avenue Station and Bay Ridge Avenue Station – were the first to undergo modernizations as part of the MTA’s phased program. Urbahn served as the architect and HAKS as the engineer for the 53rd Street and Bay Ridge Avenue stations, while HAKS was both architect and engineer for the Prospect Avenue station. The MTA’s initiative will renovate multiple subway stations throughout New York City.

The MTA’s renovation program is highly innovative in that it is the first design-build contract in the subway system’s history. The logistics of the project were creative as well, as the MTA was, for the first time, closing one station at a time for a period of six months to up to 12 months. This was in lieu of prior approaches to construction work, which meant night and weekend closures for a period that stretched out several years. Closing the stations in this manner, coupled with the design-build procurement method, is now being used instead to deliver projects in a much more expedient fashion. 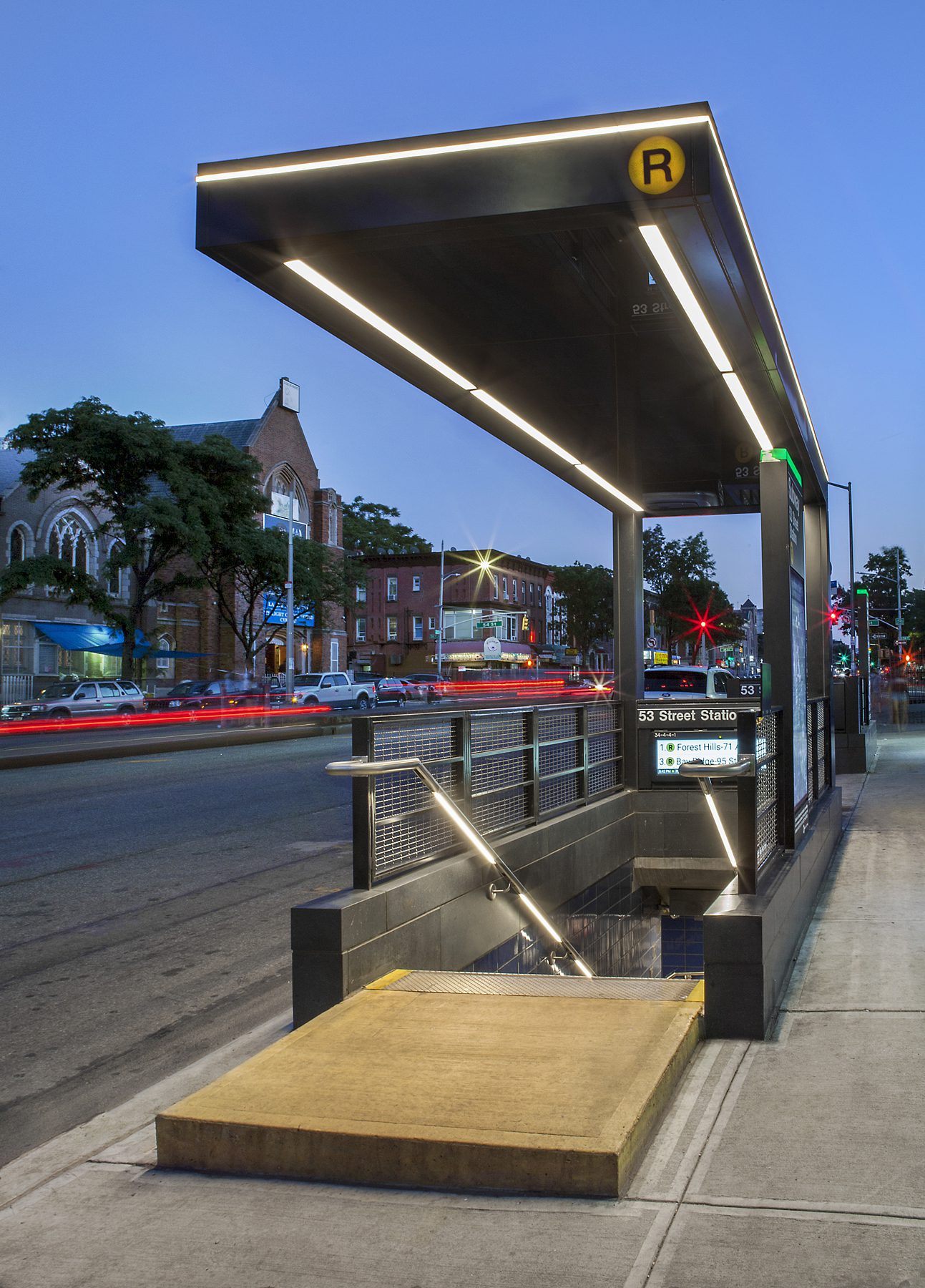 The aim of the project was to improve the street presence of the stations’ entrances; modernize the information systems throughout the stations; update the look of the interior; and upgrade the lighting and mechanical, electrical, and plumbing (M/E/P) infrastructure to give the stations a clean look.

According to Urbahn Principal, Natale V. Barranco, AIA, LEED AP, “The stations’ design is now modern, visually attractive, and easy to use and navigate. Where once the station was difficult to find even by riders who lived in the neighborhood, now the station’s entrances are prominent and architecturally appealing. This is especially important because Fourth Avenue is a major Brooklyn thoroughfare.”

Grimshaw Architects served as the program designer for the overall, systm-wide program, with Arup as the program manager. Grimshaw focused on identifying ways to improve each station’s appearance, usage, wayfinding, and the flow of foot traffic. The resulting guidelines have established a new look and feel for MTA subway stations going forward. 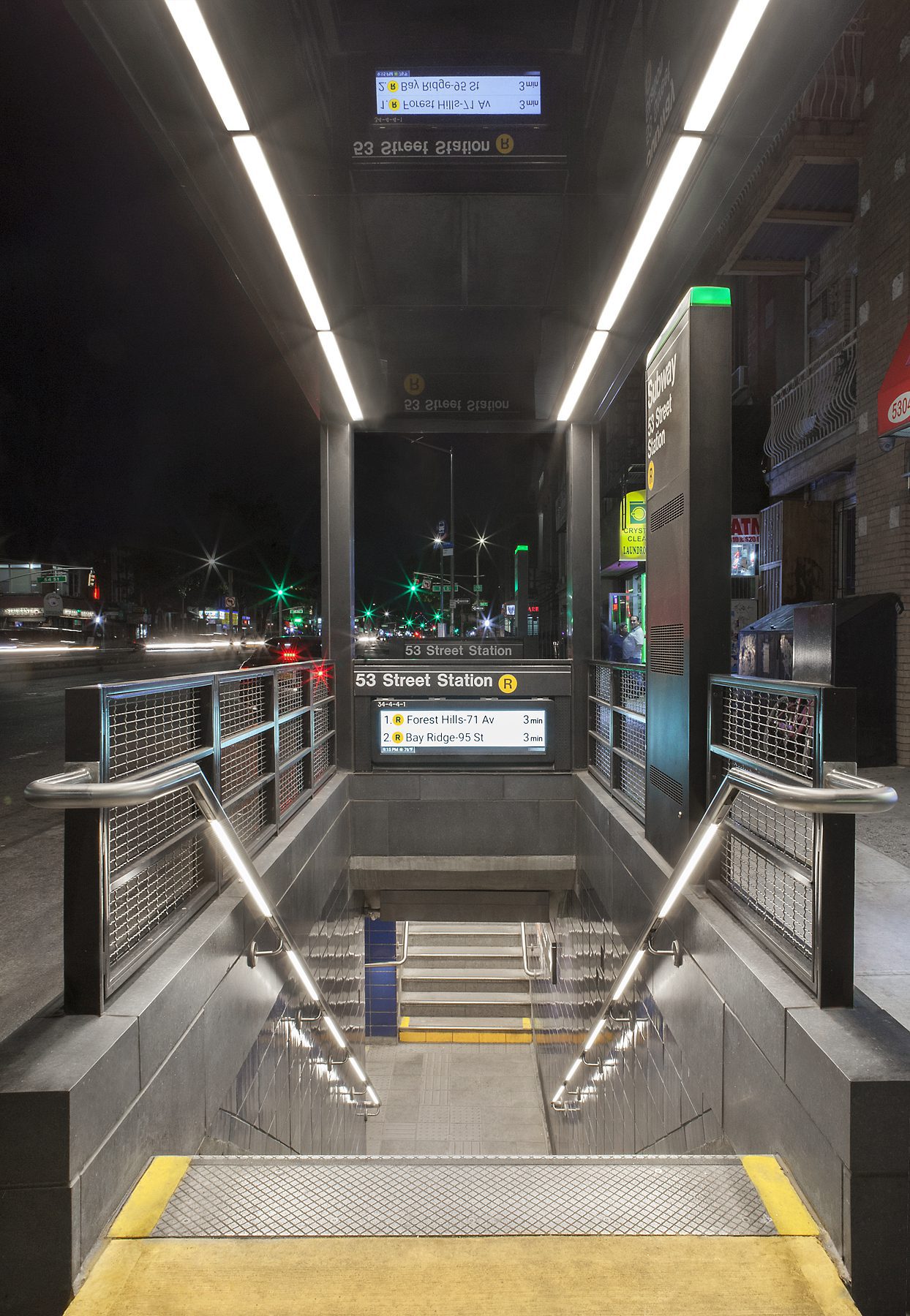 The scope of work included reconstructing each entryway’s staircase, installing a modern-looking stainless-steel railing with support bars, a new guardrails with wire mesh, a granite cladding, new cast-aluminum treads to the stairs, in a natural hue, and SGFT (structural glazed facing tile) in a deep blue color. Integrated cool-white LED linear lights installed in a channel underneath the handrail illuminate the exterior stair handrails.
Photo by Ola Wilk/Wilk Marketing Communications

The renovated 53rd Street subway station – which is situated on the corner of 53rd Street and Fourth Avenue, in the Sunset Park section of Brooklyn­ – illustrates the extent of upgrades to all three stations. It features five street entrances located on 53rd Street, Fourth Avenue, and Bay Ridge Avenue: three entrances on the southbound side, and two on the northbound side. Internally, the station is on two levels. The mezzanine level is about 3,000 square feet, while the platform level below it (about 20 feet below grade) consists of approximately 16,000 square feet.

Additional team members on the first package include CSA Group, Inc., as the mechanical, electrical, and plumbing (M/E/P) engineer; GG Engineering as the electrical engineer; Domingo Gonzalez Associates as the lighting consultant; and the industrial designer, which was managed by Urbahn, was Billings Jackson Design. 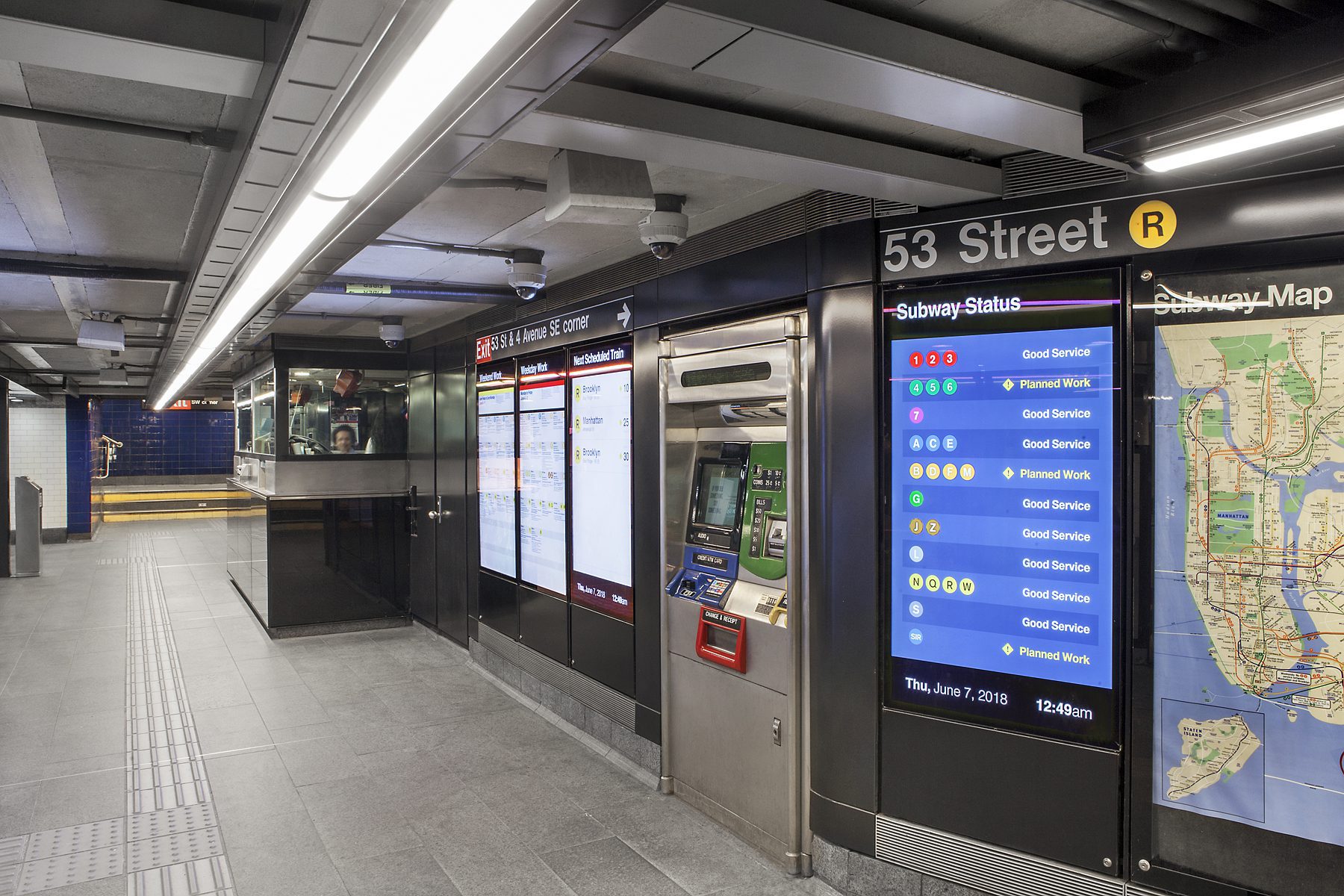 Urbahn found that the 53rd Street station was of two eras: several original elements of the circa-1915 station were still extant, such as some of the tile work. Other elements were holdovers from work done in the late 1970s, when the platforms were extended to current dimensions and selective upgrades were performed, including work on the staircases. Cinderblock tiles (gray with yellow indentation) replaced some of the original wall tile; signage was modernized with black-and-white lettering; and unattractive, utilitarian linear fluorescent fixtures replaced the original incandescent lights.

According to Urbahn’s Associate Principal, Ranabir Sengupta, AIA, LEED AP, “We saw we had a great deal of work cut out for us to modernize the station, both inside and out, to make it more user-friendly and provide a much better rider experience.”

As with many stations in the system, the 53rd Street station had featured street entrances surrounded by painted utilitarian cast-iron rail fences, each with a colored globe light that, at one time in the station’s history, indicated whether or not the entrance was open throughout the night. Grimshaw came up with the concept of using canopies to “announce” the entrances to multiple stations in the MTA’s renovation program. The canopies would also provide better, more visible service announcements, supplanting the need for colored globes.

Urbahn worked with its team members to develop the final design of the canopies. They developed a structural system comprising new tubular-steel framing embedded in the sidewalk and connected through base plates to the concrete foundation that has integrated rebar and the existing concrete frame around the entrance stair. The structural design of the canopy was calculated for both wind loads and snow loads. Urbahn project manager, Larry Gutterman, AIA, LEED AP, describes the canopies’ striking look: “Each is made with two structural-steel columns that support a roof frame with a glass panel cantilevered over the entrance. The canopies are clad with metal panels with a high-performance black finish for a dramatic look.”

Shaped like an inverted letter “L,” the roofs extend over the entire stair openings, with the glass portion of the roof illuminated by a band of LED lights. Each canopy sports new MTA signage consisting of an LED-backlit translucent plastic sign that says “Subway” as well as a route designator of a yellow circle with a black letter “R.” Together, the canopies and new signage handsomely proclaim the station’s presence at the street level.

Custom-designed information display fixtures, or “totems,” provide real-time service information at the street level before riders even enter the station. The team also installed customer information systems on the mezzanine level and on platforms.

The totems are custom-fabricated by Boyce Technologies, Inc. of Long Island City, NY, using a design developed by Grimshaw, Arup, and Billings Jackson Design. Each totem features a digital screen with changing subway and neighborhood information, and a green acrylic dome at the top indicating the entrance’s 24/7 operation.

Solari Corporation, an affiliate of Italy-based Solari di Udine, Spa., manufactured the customer information systems installed at the entrances and on platforms. They feature LED screens with upcoming train information, status announcements, and neighborhood maps. They are single sided at the street stairs and double-sided at the platforms and on the mezzanine.

The scope of work also included reconstructing each entryway’s staircase, installing a modern-looking stainless-steel railing with support bars, a new guardrails with wire mesh, and a granite cladding. Urbahn also added new cast-aluminum treads to the stairs, in a natural hue. The stair finishes now include SGFT (structural glazed facing tile) in a deep blue color that not only provides a powerful visual expression of the entrance, it provides a consistent look throughout the station, as the tiles are used in the interior as well. The cladding of the stairways was coordinated with the design of the canopy for a clean, consistent, and attractive look.

The exterior handrail is illuminated by integrated cool-white LED linear lights installed in a channel underneath the handrail. These illuminate the stairs and interior, but do not cause glare because the light source is not visible. Indeed, these are the first-ever illuminated handrails installed in the New York City subway system. 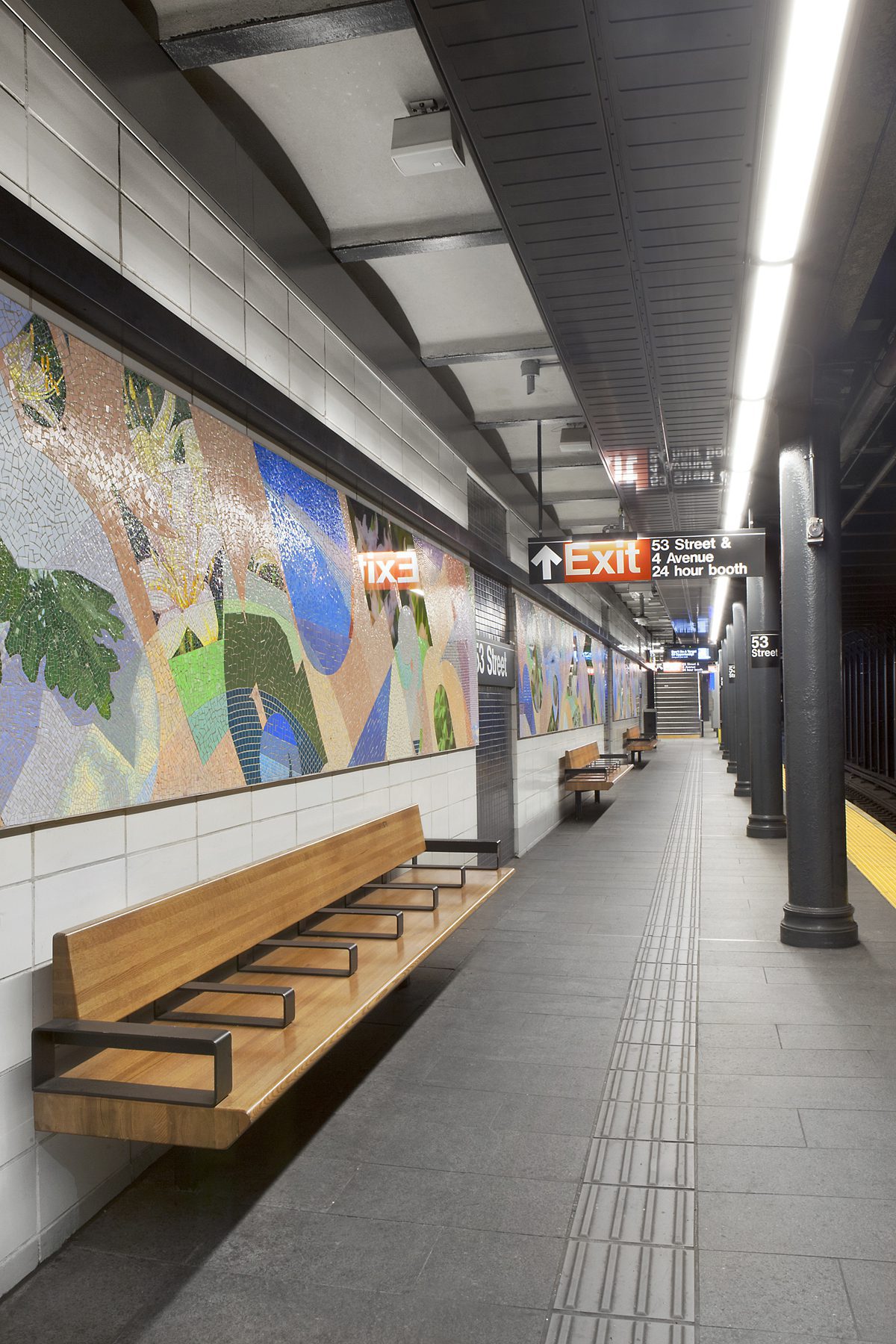 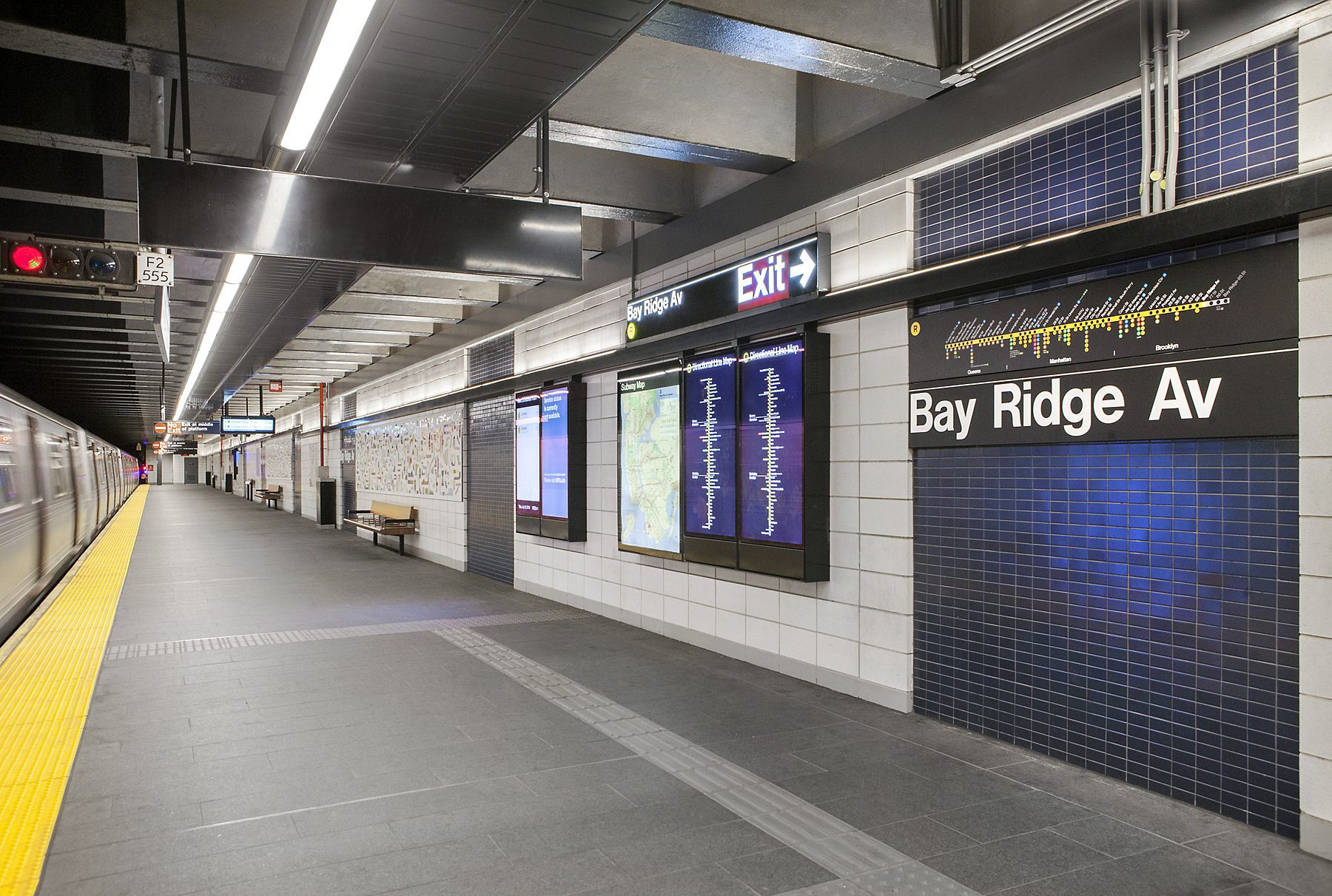 The station’s mezzanine features an agent booth, fare-control devices, and fencing, plus support facilities that include personnel bathrooms. The existing agent booth received a new, modern look, with finishes that include dark glass cladding and stainless steel trim. In the fare-control area, metal bars were removed and replaced by glass barriers. These allow light to distribute evenly throughout this level and enhance sightlines. The mezzanine’s ceilings are the original concrete; they were simply cleaned using a sandblasting process. In some areas, the renovation team exposed steel beams in the ceiling and painted them gray.

Custom information screens were placed so that passengers can view train arrival times and status update alerts before paying and entering the turnstiles. Two digital dashboards were installed near the booth. A traditional, oversized subway map was also incorporated in the refurbished space. However, it now is displayed in a newly designed illuminated case with black metal trim.

For the floors, the project team installed natural granite floor tile in a medium dark gray hue that is embedded with lighter gray granite tiles that form wayfinding paths. Wall finishes incorporate existing SGFT with new SGFT. Existing white tiles were cleaned and repaired, where needed, while dark blue accent tiles were installed near the stair landing from the street level.

Enhanced LED lighting was used throughout, for energy efficiency and to decrease the frequency with which bulbs must be replaced. The designers cleverly incorporated a network of custom-designed wire trays underneath the ceiling, combining both wiring conduits and shallow-profile linear LED light fixtures with diffusers into single integrated units.

Two stairways from the mezzanine level lead down to each of two platforms. The team rebuilt them all and equipped them with steel handrails, gray granite-clad risers, and new treads. While the handrails here are not illuminated, like those installed at the street entrances, there is plenty of light given off by the overhead LED fixtures installed at the top of stairs. These are similar in design to the fixtures used in the mezzanine.

The platforms themselves each feature a customer information screen. They have all-new flooring, specifically the two-color gray granite tile used in the mezzanine. This wayfinding tile was placed all the way to the ADA-compliant boarding areas, which are sections of the platforms built at exactly the same level as the train door, for the easy ingress and egress of passengers with mobility challenges. The floor in the ADA-compliant boarding area is interspersed with tactile tile to delineate it from the rest of the platform.

The existing SGFT on the walls was selectively repaired and repointed. As on the mezzanine, the ceiling’s concrete was cleaned. The LED linear light fixtures on the platform were custom-designed. They were provided by Apogee Lighting under contract to TAP Electric.

Urbahn Architects is a full-service planning and design firm based in New York City. Since its founding in 1945, Urbahn has designed projects for organizations and institutions that operate in the residential, healthcare, education, justice, science, transportation, and infrastructure sectors. The firm served as the architect for some of the nation’s most iconic structures, including the Vehicle Assembly Building and Launch Control at Kennedy Space Center in Cape Canaveral, FL, and the Fermi National Accelerator Lab in Batavia, IL. Urbahn’s annual domestic and international project workload exceeds $500 million in construction value.