/ Articles / Getting the Lights Back On in Puerto Rico: The Army Corps and Fluor Mount Massive Grid Restoration After Hurricane Maria

Getting the Lights Back On in Puerto Rico: The Army Corps and Fluor Mount Massive Grid Restoration After Hurricane Maria 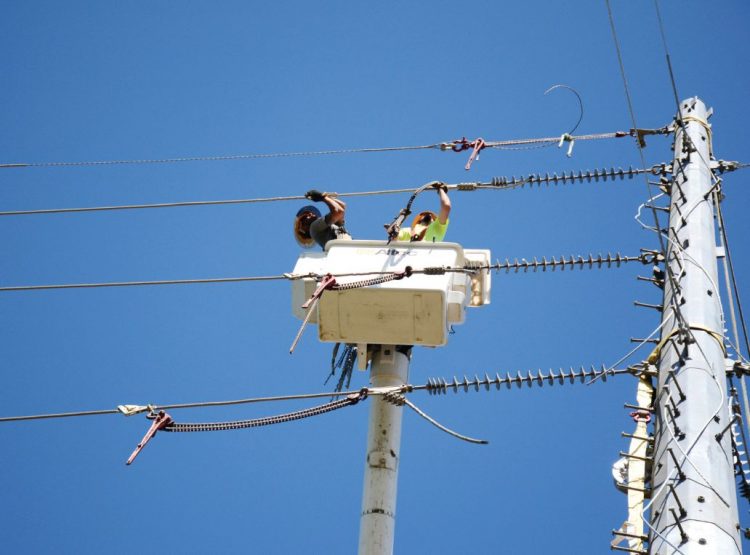 Angus Stocking on April 16, 2018 - in Articles, Feature, Featured
Hurricane Maria, which made landfall in Puerto Rico on September 2017, was the worst natural disaster ever to befall the U.S. commonwealth, and also the deadliest storm of the record-setting 2017 Atlantic hurricane season. With peak sustained winds of 175 miles per hour, Maria is officially a Category 5 hurricane, and the 10th most-intense hurricane on record. After devastating Dominica, leaving the island practically denuded of vegetation and housing, Maria moved on (slightly weakened) to Puerto Rico. The official confirmed death toll was 64, but the actual death toll is believed to be much higher, between 500 and 1,000.

Property damage was extreme. Total losses came to nearly $100 billion, making Maria the third-costliest hurricane on record. The electrical grid in particular, already weakened two weeks before by Hurricane Irma, was essentially wiped out—Puerto Rico has 2,400 miles of transmission lines and 30,000 miles of distribution lines with 300 sub-stations across the island, and it’s estimated that 80 percent of electrical facilities were destroyed.

Responsibility for restoring the grid and other infrastructure falls, by law, to the U.S. Army Corps of Engineers (USACE) and the Federal Emergency Management Agency (FEMA).

“Getting the lights back on is the focus of our work,” explains USACE Public Affairs Specialist Sarah P. Bennett. “Per the Stafford Act, the U.S. Army Corps of Engineers is required to replace, in kind, the system that was in place before the hurricanes. For the most part, this means line-for-line, pole-for-pole and wire-for-wire.

“As we restore the system, we upgrade to current PREPA standards for those lines, poles and wires,” she adds. “Exceptions can be made in cases where the cost of a different solution is less than restoring the pre-existing system. An example of this might be when the poles run up an undeveloped stretch of mountainous terrain or through wetlands. If a better solution exists, such as running along a road near that mountain or wetland, then we have the flexibility of changing the installation after it has been reviewed for cost, schedule and any right-of-way issues. Long-term initiatives are not part of our scope.”

“PREPA” is the Puerto Rico Electric Power Authority, the agency that identified materials and work needed to restore power. According to Bennett, “After Hurricane Maria, we received a materials list from PREPA with estimated material requirements based on initial damage assessments. We have taken on the task of ordering any needed supplies—to include poles, cable, transformers, fuses, towers and insulators—to make up for the shortage of power restoration supplies across Puerto Rico.”

Supply logistics were difficult, due not only to Puerto Rico’s shortages, but also to the archipelago’s geographical separation from the U.S. mainland, and tropical storm damage in the rest of the United States. Bennett elaborates: “The geographical separation from the mainland limited modes of transportation available for shipping materials to the island. In addition, other natural disasters in Texas, Florida and California caused a shortage of supplies across the United States. Manufacturers are fabricating supplies as quickly as possible and, as the needed materials are fabricated, they are expedited to Puerto Rico.”

Fortunately, the Corps is highly skilled and innovative when it comes to logistics, and it can call on the resources of the entire federal government and U.S. contractors. For example, on Nov. 21, 2017, the Fluor Corporation announced the arrival of more than 400 pieces of essential construction and specialty equipment at a shipping terminal in Puerto Rico in support of its ongoing work restoring power there. The equipment arrived on USNS Brittin which, with six interior decks and a cargo-carrying capacity of approximately 380,000 square feet, is one of the U.S. Navy’s largest “Bob Hope-class roll-on and roll-off” cargo ships.

Fluor, the main electrical contractor for the Puerto Rico Power Restoration Project, is working under two USACE task orders with a total value of up to $1.3 billion. Regarding the USNS Brittin delivery, Fluor Executive Program Director Matt Hunt says, “We are excited about achieving this important milestone. The equipment requirements for repairs to the power distribution system on the island are extremely large, and we are grateful for the support of our customer, the U.S. Army Corps of Engineers, which helped bring all the logistical pieces together to complete the delivery.”

It’s difficult to overstate the scale of the restoration needed in Puerto Rico—imagine rebuilding the electrical grid in an island commonwealth approximately the size of Connecticut. Given the scale, the mostly mountainous terrain, and difficult conditions generally due to hurricane damage from Irma and Maria, the Corps’ timeline for restoration of power was ambitious. “We know it will take significant time to restore power to the majority of people due to the challenges of terrain, the state of the grid system before the storms, and the extensive damage caused by the hurricanes,” says Bennett. “The Corps of Engineers, PREPA and the island’s Power Restoration Coordinator will continually evaluate the remaining work in order to achieve our goals of restoring electricity to 90-95 percent of customers on the island by March 31, 2018. Achieving 95 percent restoration in areas with challenging terrain, like Arecibo and Caguas, will take until mid-April and late-May, respectively.”

Little time has been wasted, and, as of mid-March, the project appears to be on track. For example, 46,234 power poles and 3,276 miles of conductor have been delivered to the island.

Fluor, with extensive commercial power and government contingency operational experience, and a 54-year presence in Puerto Rico, was well placed to provide timely grid reconstruction. The USNS Brittin delivery brought the firm’s total equipment assets to more than 600, including augers, bucket trucks, forklifts, earth-moving equipment and high-voltage vehicles, among others. In addition, a total of 600 Fluor employees, along with subcontracted staff, now are working on the project, with more arriving weekly. At peak, a total of 3,000 workers and 2,000 pieces of equipment, from various agencies and firms, were at work on the power-restoration project.

These efforts are not universally appreciated. Puerto Rico, after all, suffered the longest blackout in U.S history. As of mid-February, about 15 percent of residents still were without power, leading to angry demonstrations across the island, along with community-organized volunteer restoration work such as installation of wooden poles.

But the seemingly slow restoration isn’t entirely due to the USACE, Fluor or even Hurricane Maria itself. In fact, Puerto Rico’s grid was substandard long before Irma and Maria did their damage. PREPA, a government agency, currently is $9 billion in debt and operating infrastructure about three times older than the industry average. PREPA also lost two-thirds of its workforce in the three years before the two hurricanes, as Puerto Rico residents migrate to the U.S. mainland to escape difficult economic conditions in the commonwealth. In November 2017, about two months after Hurricane Maria swept through, Ricardo Ramos, PREPA’s executive director resigned. This was partly due to slow progress as of November, with less than half of the island’s electricity restored and a new major outage that month, and also due to Ramos’ controversial decision to engage tiny (just two employees) Montana firm Whitefish Energy for emergency restoration services with a contract worth up to $300 million—prior to this contract, Whitefish’s largest contract was a $1.3 million electrical upgrade in Arizona.

Aside from the remarkably small size of Whitefish, the contract was highly unusual; FEMA denied any involvement with the contract despite Whitefish’s claims to the contrary, a clause in the contract prevented government auditing of labor costs and profits, the contract was no-bid thanks to an executive order issued by Puerto Rico Governor Richard Rosselo and, despite existing PREPA requirements for contractors to undertake the logistics of housing workers and transporting materials, no such requirements were part of the contract.

The contract even became a political hot potato for President Trump. Joe Colonnetta, a major investor in Whitefish Energy, was a major donor to Trump’s 2016 presidential campaign, and U.S. Secretary of the Interior Ryan Zinke and Whitefish CEO Andy Techmanski know each other from Whitefish, Mont., (population 6,500)—the two admitted speaking to each other shortly after Maria passed through Puerto Rico, and one of Zinke’s sons worked on one of Techmanski’s construction projects.

Ultimately, Whitefish Energy sent 300 subcontracted workers to Puerto Rico to rebuild 100 miles of power lines, but even this was controversial—the subcontracted workers were from existing energy firms and could have been contracted directly, at lower costs. Moreover, Whitefish charged $319 per hour for lineman labor, while actually paying linemen just $63 per hour. These are extraordinarily high wages and markups, even for emergency work.

In late October 2017, just a few weeks after the contract was awarded, Governor Rossello asked the PREPA board to cancel the contract, and the FBI now is investigating the matter. Governor Rossello also announced that PREPA will be privatized. In a way, Irma and Maria wrecked not just a power grid, but a government agency as well.

By contrast, Fluor’s initial power restoration contract was for just $240 million, and Fluor is a Fortune 500 global engineering firm. And Fluor has been productive; within 48 hours of contract approval, Fluor personnel were already on the job in San Juan, and ultimately transported more than a thousand pieces of equipment and supporting material, while managing at peak (with the USACE), up to 3,000 workers and 2,000 pieces of equipment. As of March 2018, Fluor installed 493 miles of conductor wire and replaced or repaired nearly 8,000 power poles, restoring power to more than 250,000 customers, including critical facilities such as hospitals and schools.

The Current State of Things

Funding for power restoration is running dry, and many workers and contractors now are leaving the commonwealth. Nevertheless, about 1,600 workers and 1,300 pieces of equipment remain on the job, still working to restore power to remote areas. Fluor spokesman Brian Mershon said in a Fox News article, “Crews who will remain in Puerto Rico will continue to restore power and complete assignments based on available funding and materials. This is a normal part of the lifecycle of large government projects.”

Adds USACE Spokesman Preston Chasteen, “As part of the natural progression of any emergency response, some contractors are beginning to responsibly draw down their workforce, but have provided plans that allow them to complete as many assigned lines as possible.” He also said the agency still expects that 95 percent of Puerto Rico’s power customers will have power by the end of March, well before the 2018 hurricane season, which starts June 1st.

So despite the difficult conditions and terrain, and extraordinary logistical challenges, Fluor and the Corps were largely successful at restoring power in Puerto Rico after the island’s largest-ever hurricane wreaked havoc. It’s a fine example of large agencies and firms working together for public benefit.

Angus W. Stocking, L.S., is a licensed land surveyor who has been writing about infrastructure since 2002. His father, Robert Dean Stocking, spent his entire career with the USACE as a professional engineer; email: angusstocking@gmail.com.

Comments are disabled
NEXT ARTICLE
While Majority of Americans Prefer their Personal Vehicles for Travel to and from Airports, Use of Ride-Sharing Services is Rapidly Accelerating
April 17, 2018
PREVIOUS ARTICLE
March – April 2018 Table of Contents
April 16, 2018