/ News / Port of Savannah to add 1.6M TEUs of capacity

Port of Savannah to add 1.6M TEUs of capacity 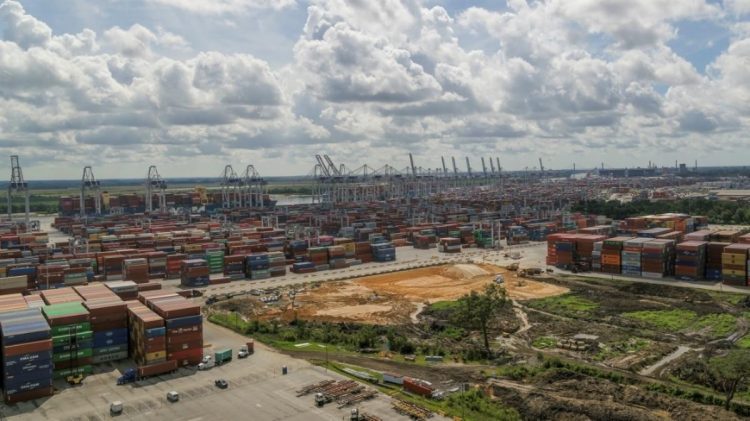 The Peak Capacity Project, foreground, is currently under construction and will provide 800,000 twenty-foot equivalent container units of annual capacity at the Port of Savannah. The project will be completed in two phases, with the first coming online in December. See drone video of the construction site here. (Georgia Ports Authority / Jeremy Polston)

SAVANNAH, Ga., Sept. 28, 2021 – On the heels of reporting the second busiest month in its history, the Georgia Ports Authority Board approved more than $34 million to help expedite an additional 1.6 million twenty-foot equivalent container units in capacity that will begin coming online in December.

“In three months, this investment will begin to deliver the additional capacity we need to better accommodate increased volumes and demand for our services,” said Griff Lynch, executive director for the GPA. “I would like to thank our Board of Directors for their confidence in our ability to grow our existing terminals; our customers for sticking with us and, in many cases, increasing their commitment to Georgia’s ports; and to the men and women working throughout the supply chain, and especially GPA’s employees, I want to thank you for your hard work and dedication during unprecedented times in our industry.”

Part of the approved expenditures included the purchase of 22.2 acres adjacent to GPA’s 145-acre West Expansion property. The board also provided funds to begin developing another 18 acres of land adjacent to GPA’s 60-acre Peak Capacity project, currently under construction. In total, the developments will add 230 acres of container handling space, coming online in phases with full completion in 2023.

“The GPA’s expansion strategy will not only maintain Savannah’s position as the hub port of the U.S. Southeast, but strengthen its ability to drive economic growth and private investment for communities across Georgia,” said Joel Wooten, GPA’s chairman of the board. “In light of unprecedented demand, it is incumbent on the Board to maintain our ports to promote job growth for the state.”

The Port of Savannah handled 485,595 TEUs in August, an increase of 10 percent, or 44,000 TEUs over the same month last year, which was the previous high for August. It was the second busiest month in GPA history, after only March 2021, when Garden City Terminal handled 498,000 TEUs.

Wooten also welcomed Leda Chong who was appointed by Gov. Brian Kemp to GPA’s Board of Directors last week. Chong is senior vice president for Government Programs & Sales at Gulfstream Aerospace Corp. She previously served as senior vice president of Asia Pacific for Gulfstream and was responsible for business development, strategic planning, and government relations within the Asia-Pacific region for both Gulfstream and the aerospace business group of General Dynamics, Gulfstream’s parent company. Chong joined General Dynamics in 2007 as a director of Government Relations and was appointed staff vice president of Government Relations in 2009. Prior to joining General Dynamics, Chong served in the U.S. Navy, retiring in the rank of Commander. She is a native of Hong Kong and fluent in Chinese. Chong graduated magna cum laude from the University of California, San Diego, with degrees in applied mathematics and French literature.

Board members Jimmy Allgood and Douglas Hertz were reappointed by Gov. Kemp.