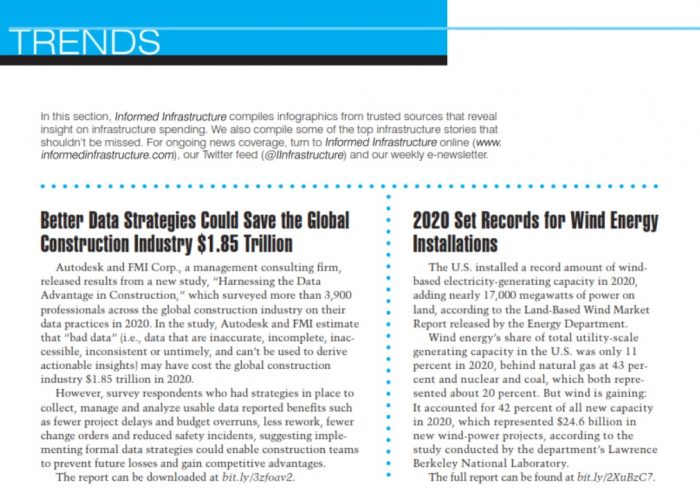 Better Data Strategies Could Save the Global Construction Industry $1.85 Trillion

Autodesk and FMI Corp., a management consulting firm, released results from a new study, “Harnessing the Data Advantage in Construction,” which surveyed more than 3,900 professionals across the global construction industry on their data practices in 2020. In the study, Autodesk and FMI estimate that “bad data” (i.e., data that are inaccurate, incomplete, inaccessible, inconsistent or untimely, and can’t be used to derive actionable insights) may have cost the global construction industry $1.85 trillion in 2020.

The report can be downloaded at bit.ly/3zfoav2.

The U.S. installed a record amount of wind-based electricity-generating capacity in 2020, adding nearly 17,000 megawatts of power on land, according to the Land-Based Wind Market Report released by the Energy Department.

Wind energy’s share of total utility-scale generating capacity in the U.S. was only 11 percent in 2020, behind natural gas at 43 percent and nuclear and coal, which both represented about 20 percent. But wind is gaining: It accounted for 42 percent of all new capacity in 2020, which represented $24.6 billion in new wind-power projects, according to the study conducted by the department’s Lawrence Berkeley National Laboratory.

The full report can be found at bit.ly/2XuBzC7.

According to a report from Norwegian certification firm DNV, poorly welded, badly located and completely missing studs that joined steel support beams to a concrete layer supporting the track bed were to blame for the May 3, 2021, collapse of an elevated segment of Mexico City’s metro that killed 26 people.

Hired by the Mexico City government, DNV concluded that the sloppy installation of the studs created a situation where the elevated structure was working as “two independent parallel beams, a concrete beam and a steel beam, that experienced loading conditions for which they were not designed,” the report said. This situation distorted the framework, leading to “fatigue cracks” that reduced the structure’s ability to bear weight.

Other possible factors included deficiencies in the beams themselves and the design of the framework, the report said.

The metro was built by a consortium of Mexico’s ICA; Grupo Carso, a company controlled by the family of Mexican tycoon Carlos Slim; and French trainmaker Alstom SA.

The Federal Railroad Administration (FRA) issued a notice of funding opportunity (found at bit.ly/2XqqkLg) regarding the availability of nearly $362 million via its Consolidated Rail Infrastructure and Safety Improvements (CRISI) grant program.

The agency said its CRISI program funds projects that reduce congestion, improve short-line and regional railroad infrastructure, relocate rail lines, enhance multi-modal connections and facilitate service integration between rail and other facilities such as at ports or intermodal facilities.

The following are funding “set asides” within this round of CRISI grants:

Report: Solar Can Supply 40 Percent of Nation’s Electricity by 2035 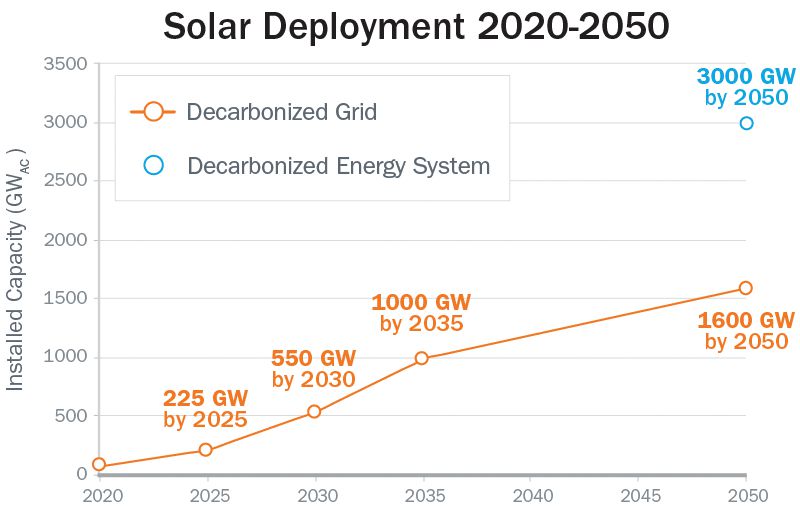 The Solar Futures Study modeled the deployment of solar necessary for a decarbonized grid. Preliminary modeling shows that decarbonizing the entire energy system could result in as much as 3,000 GW of solar due to increased electrification.

On Sept. 8, 2021, the U.S. Department of Energy Solar Energy Technologies Office (SETO) and the National Renewable Energy Laboratory (NREL) released the “Solar Futures Study,” which explores solar energy’s role in transitioning to a carbon-free electric grid. The study finds that with aggressive cost reductions, supportive policies, and large-scale electrification, solar could account for as much as 40 percent of the nation’s electricity supply by 2035 and 45 percent by 2050.

Read the full study at bit.ly/3nIV9FX.

• Artificial Intelligence: On the Verge to Disrupt and Transform the Building Life Cycle