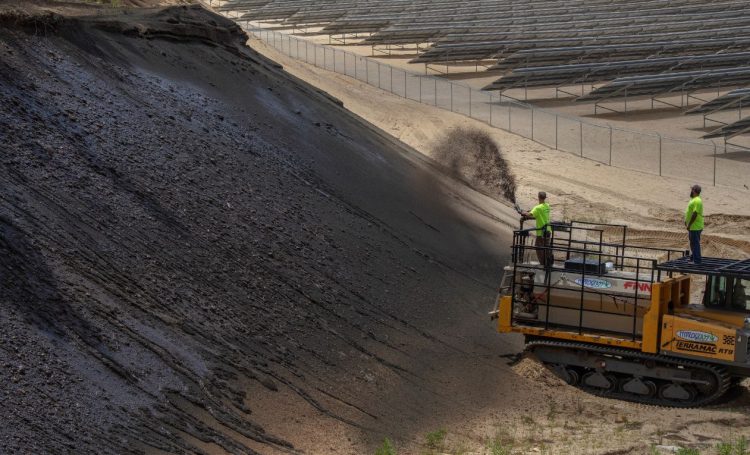 California’s wildfire season is looming. Hurricane season begins June 1. Climate-change concerns are leading to strengthening infrastructure. Federal and state infrastructure spending is taking shape. People are heading back to work as pandemic-related restrictions ease up. These factors present opportunities for new infrastructure projects as well as rehabilitating existing ones.

Owners of three longstanding companies in the industry that have sustained years of economic fluctuations discuss which strategies lead to business opportunities as well as how to position for success in a competitive market.

Jay Selby, owner of Selby’s Soil Erosion Control in Newcastle, Calif., recently acquired an Idaho company as part of an expansion—including Washington and Montana—to position himself for potential growth opportunities. He notes that such opportunities can be sought on Builders Exchange, Sam.gov and local transportation department websites. Selby’s company, in particular, has found significant work mitigating climate-change impacts.

“Wildfires have been impacting California for decades as far as forest-fire erosion control, but last year, Oregon got pretty devastated,” says Shelby. “Parts of Idaho and Washington were devastated to a level they hadn’t seen before. A change in climate has changed weather patterns and created new natural disasters.”

Additionally, Selby notes there are many “poorly built dams and waterways structures as was seen at the Oroville Dam, where there was no rebar in the concrete” as an opportunity to rebuild dams, levees and other infrastructure for flooding. Selby also notes a lot of infrastructure work is set aside for Disadvantaged Business Enterprises such as those owned by women, disabled veterans and minorities.

Bob Arello has been in business for 18 years as owner of Hydrograss Technologies with locations in Sarasota, Fla., and North Oxford, Mass. He’s done a lot of soil-erosion and stormwater projects on solar farms in Massachusetts.

“It’s been huge up to Maine, down to Rhode Island and to New York,” he adds.

In Florida, highway work comprises the majority of Arello’s projects as the state’s roads continue to expand to accommodate population increases.

Margie Sobczynski, president of Erosion Control Inc. in Olathe, Kan., notes that what may work in one part of the country—such as retaining walls and permeable pavement—may not in another. For example, the Kansas Department of Transportation (DOT) prefers to use erosion-control blankets on steeper slopes and has had success with that. “They prefer drill seed and straw mulch in the flatter areas,” she adds.

“I’ve been to several International Erosion Control Association meetings, and our Kansas DOT representatives are there looking at and touching the products and looking at the data behind them to see how well it’s functioning,” she adds.

Selby notes erosion-control projects increasingly desire “more of a natural, biodegradable approach. Where you previously would use concrete mats, they’re switching over to geotextile or geosynthetic products.” Many new geotextile products now are rated to last a lot longer than they were in the past, he adds.

“When I first came into Florida, hydroseeding was noted as inefficient,” says Arello. “A lot of guys were putting down inferior products, and it had a bad name. It has come a long way. We’re trying to change industry minds of how we can make everybody pleased with how fast the grass grows and why that’s important.”

Arello says he works to convince those in charge of highway work projects to utilize hydroseeding instead of sod, which often is specified. With Florida’s sandy soils lacking nutritional value, he says “a lot of this sod is regressing.”

Arello tests and demonstrates products on his company property at no cost, hoping transportation departments will consider alternatives to traditional erosion-control approaches.

“Sprayed products are not always the panacea, and sod is not always the panacea,” explains Arello. “The happy medium can be to combine both. We do soil-erosion blankets or bonded fiber matrix in certain situations, because we’re going to have channel waterflow. We have a better chance for stabilization using heavier blankets and turf-reinforcement mats.”

Arello also uses GeoEarth, a topsoil substitute which he finds offers long-term growth due to its blend of mycorrhiza, biochar and compost. He’s obtaining favorable results from such products for the Mosiac Company in Tampa, Fla., which mines phosphate and potash.

Taking on more work means addressing the ongoing challenge of finding and retaining qualified employees. Selby brought in a professional trainer to develop an industry-specific manual and create a positive company culture.

“The new batch of younger laborers are millennials, and they really do need to be heard,” says Selby. “If they’re complaining about legitimate issues inside the company, and management or owners are not doing anything about it, it creates a real bitterness throughout the whole company.”

Both Selby and Arello say they pay higher wages to get employees who will represent them well in the field.

“In our business as a seeding company, you’ve got to get people who can drive and have the ability to go out and do other things,” Arello says. “We offer good benefits, a 401(k), dental and health.”

“Other states are following suit with California as far as certifying stormwater and erosion-control specialists,” explains Selby. “We’re seeing more awareness, regulation and enforcement in other states where it had been typically ignored.” 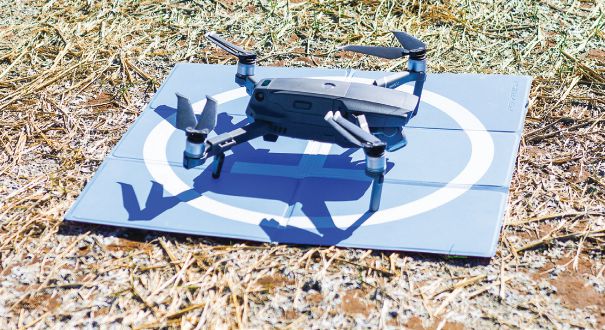 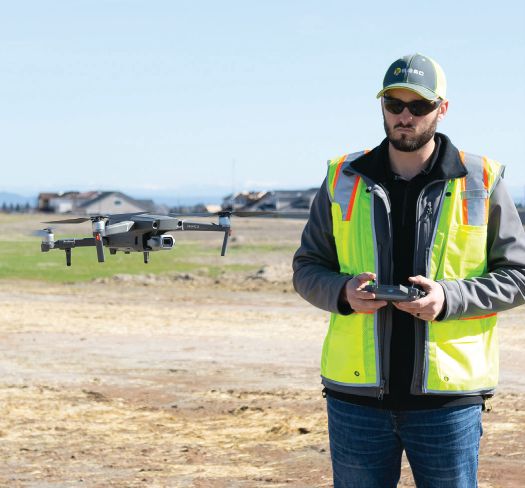 Safety training such as OSHA-10 for construction and OSHA 40-hour HAZWOPER is important, notes Selby. HAZWOPER and Mine Safety and Health Administration (MSHA) are needed for erosion control for mining projects.

“Those trainings are relevant to a lot of the utility districts like power companies,” he adds. “They have a Gold Shovel Standard. A lot of certifications your company has to qualify for are based on your safety record. Being a safe company is really important.”

Another way to obtain valuable training is through state agencies.

“Maybe you don’t necessarily work on transportation department projects, but you can go through their training process and learn about their standards and expectations,” says Sobczynski.

Counties also have certification courses to help contractors know which products to have on a jobsite, how and when to maintain the site, and basic standards of the requirements, she adds.

Sobczynski firmly believes companies should give employees formal certified training on product installation such as that provided by Kansas DOT. The day-and-a-half training includes written and field tests in a mock workstage area to learn to install preferred products. 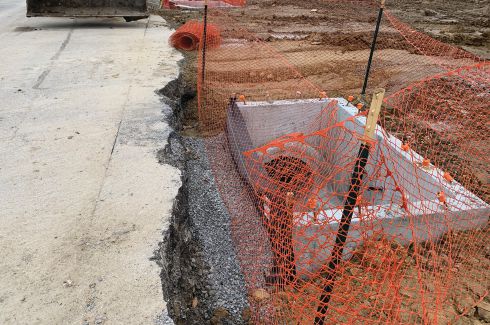 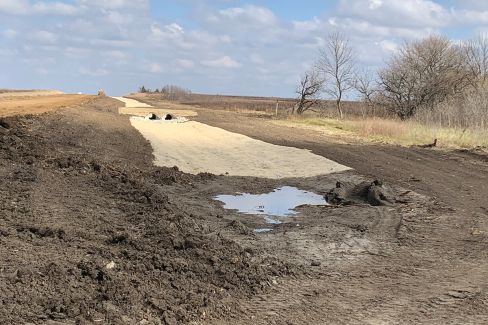 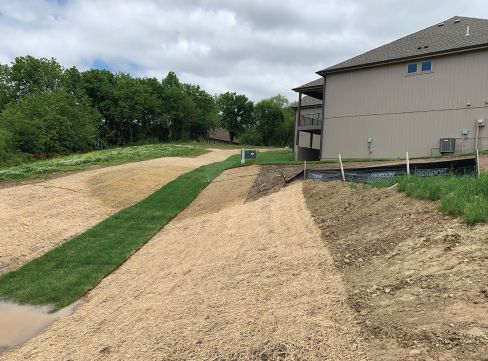 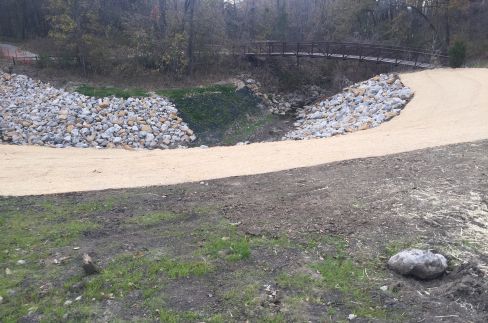 Sobczynski pivoted her business from installing products and now provides services in SWPPP plan development, SWPPP site project inspections, and training managers on how to manage subcontractors and erosion control on their site. The training helps companies choose the best management practices appropriate to the situation by analyzing the site, determining the velocity and location of water leaving the project, how to contain that, and control not only the sediment, but also the erosion to ensure proper site stabilization.

“It might seem that you’re spending a lot more money upfront temporarily stabilizing something because it’s not the right seeding season, but getting some temporary stabilization down is going to save you money in the long run from the erosion, having to regrade and having potential fines from the EPA, the city and state agencies as well,” she says.

Taking on new opportunities with trained crews is enhanced by top-notch equipment and technology. Selby weighs the purchase or rent decision according to the job.

“A lot of companies do a rent-to-own package,” he adds. “Then you can make sure you have enough work to merit pulling the trigger on some of these big purchases.”

Selby points out that Tier IV Final equipment is necessary for adhering to emissions standards. Tech companies for which he does work, such as Apple and Google, are requiring Tier IV equipment on the job, he says, adding “that’s only going to grow.”

Bigger equipment offers more efficiency but may not work for every business model, Selby says, adding contractors should get equipment that matches the size of the area’s market share. Selby, for example, has increased his use of drones.

“We’re able to not only measure jobsites more accurately from the air, but we can convert the files to usable site flood maps,” he explains. “You can identify slope gradients with landslide potential.”

He points to his current project for the state of California in which he’s using drones to fly over state parks following wildfires to calculate debris flow that presents landslide possibilities. Debris can plug ravines and drains as well as go underneath roads or in streams and back up the water. Drones enable him to get an “educated model” of what the debris flows might look like after a 2-inch rain event, says Selby, enabling the state to devote resources to precise erosion-control needs.

According to Sobczynski, drones are useful on large sites, but sometimes the images aren’t detailed enough. That may merit “walking to the far end corner of the project in the mud and physically looking at the minor issues that could turn into a major issue,” she adds.

Selby uses iPads in the field for several functions, including having safety manuals sent electronically to jobsites. He uses GPS tracking to weekly rate his drivers’ habits on accelerations, fast cornering and hard braking.

“One of the measurables we have for our employees is their driving record,” notes Selby, which impacts insurance costs. He also uses backup cameras. “I think within the next five years, you’re going to see a lot of insurance companies wanting fleets that have onboard cameras.”

Arello relies on technology built into the trucks and hydroseeders for ease of use.

“We look at it as ‘how can we expedite the work on projects’ and ‘how much of the machine can you use to mix more products at once instead of doing two or three applications,’” he says.

He also favors Tireboss technology that allows his crew to deflate tires down to 20 pounds of pressure to enable them to get around on sandy conditions.

“It does all the measurements right on my screen, so I don’t have to go to an office-supply store, get a blueprint and scale it by hand,” he adds. “It makes our lives easier and quicker. It’s a numbers game. The more numbers we get out, the better chance we’re going to get more jobs.”