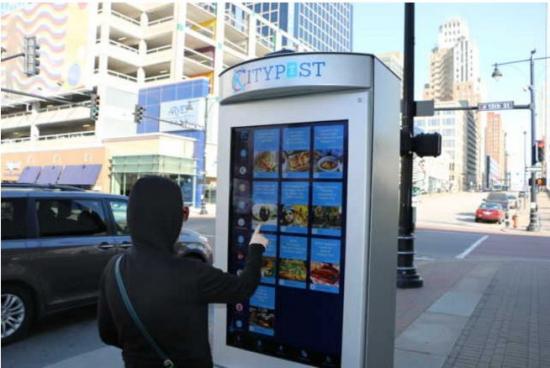 Washington, DC —  At seven feet tall and featuring 55-inch screens, the 30 kiosks coming to downtown D.C. will be much more than glorified digital ad machines. Designed by New York–based Smart City Media, the kiosks will feature timely information relating to nearby restaurants, retail, events, and public transportation. This pilot program is led by private nonprofit DowntownDC Business Improvement District (BID), which is supported by the property owners within its 138-block area northeast of the White House and Constitution Avenue.

The kiosks will monitor noise levels, temperature, air quality, humidity, and barometric pressure. This data will be supplemented by an array of sensors placed on the BID’s buildings that will also monitor the surroundings. Unlike the kiosks, these sensors won’t have a conventional data connection; they’ll use a technology specially developed for “Internet of Things” applications: Low Power Wide Area Network (LPWAN). LPWAN devices send small bursts of encrypted data over radio to a base station. While the data bursts can’t be large—you couldn’t transmit a song or movie—the sensors gain range and long battery life (up to 10 years, depending on usage). Companies like Portsmouth, New Hampshire–based Senet—which is building a new LPWAN network in D.C. for this project—arebetting that LPWAN is the future backbone of smart-city technology. Conventionally connected sensors elsewhere within the BID’s buildings will monitor energy and water usage, along with waste production and data related to occupancy. Combined with public data—such as bike share usage—a formidable data set emerges for the entire D.C. BID.

Much like New York’s  LinkNYC program, these D.C. kiosks will offer free wi-fi and pay for themselves with new digital ad revenue. However, the BID’s efforts will tap into deep technological infrastructure already in place in the nation’s capital. Soon, researchers will be able to map loads of information onto D.C.’s urban landscape.

After the sensors collect this data, but before it’s distributed to stakeholders, software from New York City–based maalka will aggregate that information and—in the words of its CEO Rimas Gulbinas—“slice and dice” it for easy sharing. BID members will log into maalka’s software to track the performance of their buildings, and the BID will roll out a private/public access point in the future. (The BID is currently determining what data sets will be public, as some information may be sensitive.) Once released, this information could be used for an endless amount of analyses, including exploring connections between the environment and health, measuring the impact of policy initiatives, tracking sustainability, and optimizing transit. “Once this data becomes available and collaborative cities provide data in the same way, it creates an opportunity for app development that is cross-city which has not existed until now,” said Wilfred Pinfold, CEO of Urban.Systems, a consultancy working with the BID.

As for the data itself, the BID isn’t claiming ownership. “We don’t plan on owning any data,” said DowntownDCBID director of sustainability Scott Pomeroy, “but we will protect data that our stakeholders want to have protected.” He added that transparency and openness are actually the main objective: “There’s a value in that transparency because it can be analyzed and worked with” by app developers, researchers, and policy makers, Pomeroy added. Nearby shops will be able to broadcast ads on nearby kiosks, meaning, “you’re going to get stuff that’s locally relevant as opposed to [the big box businesses] out on the street now,” said Smart City Media CEO Tom Touchet.

Among the many entities behind this kiosk project—including the BID, Maalka, Smart City Media, and more—there is a strong consensus that this effort represents a recent convergence of technological know-how and political will-power. For example, the BID also operates an EcoDistrict initiative that’s committed to improving sustainability; the U.S. General Services Administration owns 30 percent of the buildings within the BID and has been a key driver of the initiative.  D.C. city government also has its own PA 2040 initiative, a similar “Internet of Things” undertaking that may eventually integrate its data streams with the BID’s. Working at a district-wide scale, according to Gulbinas, there are new opportunities to experiment, engage with citizens, and get feedback: “What we’re creating is this living lab of live data…and if things work, they can be translated to other districts.”

At @autodesku , the learning never stops. Join the conversation and take your career to the next level.… https://t.co/vBnfjTQkRX
5 hours ago
@BentleySystems Issues Call for Nominations for the Year in Infrastructure 2020 Awards Program https://t.co/YUJ7GcJwTs #YII2020
6 hours ago
@awwa Meet the Water operators at the Annual Conference & Exposition (ACE) & be sure to express your gratitude for… https://t.co/zfSRFxUA8i
6 days ago
@Wipro Wipro and @SmartEnergyW (SEW) form global strategic alliance to accelerate #DigitalTransformation for enterp… https://t.co/UPeRBLc4Wa
2 weeks ago
DFI Educational Trust and @terraconlife Foundation Announce a New Scholarship Fund https://t.co/t18FBN7Kd9
2 weeks ago
@Transoft Solutions Acquires Canadian-based @BriskSynergies https://t.co/hceegJKx4q
3 weeks ago
Video: Interview with CEOs of @BentleySystems and Topcon Positioning Systems @topcon_today https://t.co/38rRQNbNcO
3 weeks ago
New @ASCETweets Publication Explores Engineering Designs for Precipitation Extremes https://t.co/2OX0kg9cOg
3 weeks ago
@HNTBCorp Americans pay an average of less than $25 a month to maintain the roadways and bridges essential to mob… https://t.co/T6mrVfdibT
4 weeks ago
Sdiptech lists: Trends – and challenges for the #infrastructure sector 2020 https://t.co/4cuswAcecV
1 month ago