To set the stage of this essay I would ask each reader to think back to a time in their life when they were asked “what do I want to do when I grow up?” This simple but powerful question has been recurrent for centuries with varying answers, to the demise and success of millions, and was just as profound for me. As a young child I was always drawn to history and more importantly the swashbuckling endeavors of an ever-so-famous and iconic movie character, Indiana Jones. I can remember being fascinated by the histories of our past and believing that “Dr. Jones” had a dream job! 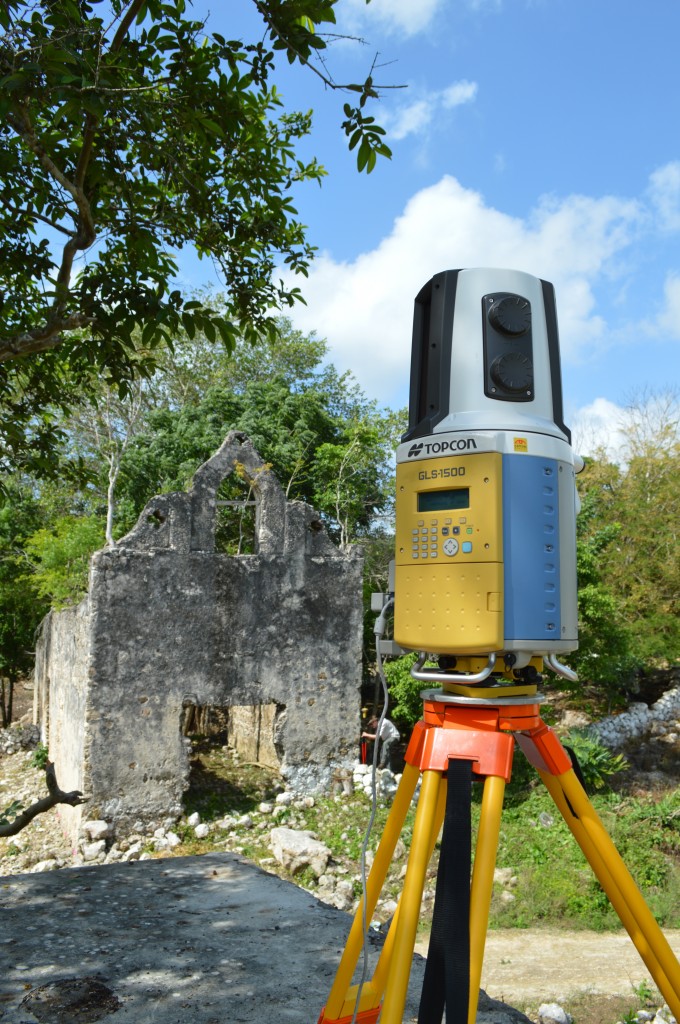 Geodetic scanning image of the church on the Chebalam site. Topcon Positioning Systems donated the use of a GLS-1500 Geodetic LiDAR Scanner.

Throughout high school, I maintained this thought, and while most were fascinated in sports, physics, or the opposite sex, I was absorbed in every history class offered. Even in college, to the distaste of my pragmatic and business-orientated parents, I studied history and anthropology as my majors. Following college, I even had a stint as a Cultural Resource Management (CRM) Field Archaeologist. It was at this juncture that I learned that real archaeologists didn’t use bullwhips, but actually utilized some of the most technologically advanced equipment on the planet.

I was also especially drawn to the spatial contexts to which people lived and how they lived in their own contemporary “histories.” These spatial elements are mapped by archaeologists using a combination of hand drawn maps, Computer Aided Drafting (CAD), Geographical Information Systems (GIS), Total Stations and Global Positioning Systems (GPS). As a product of the computer age I easily adapted and quickly learned these systems. Very quickly my analytical and business-like upbringing had me realize the potential of these systems as a full time job. It is here where I changed focus and furthered my education in GIS. Since then I have rarely looked back. The world of computer mapping opened a wide door for me while providing me the opportunities to use mapping in a variety of different industries. While I do not fight Nazi’s or find Holy Grails today in my professional career, I can be proud of the fact that the technology I leverage daily helped the very thing I always dreamed of as a child

Recently on a vacation to Mexico with my fiancé (also a GIS professional), we were approached by a colleague of mine Dr. Adolfo Ivan Batun Alpuche, who mentioned that he was working with a professor from the University of North Carolina at Chapel Hill on a cultural heritage project mapping the indigenous peoples of the Yucatan, Mexico in correlation with 16th Century Spanish colonization. After much discussion about the work that my fiancé and I were completing in the United States, we naturally displayed our passion and interest in the project. Before we knew it we were building a plan and collaborating to help accomplish the goals and vision of the project.

Dr. Batun quickly organized the efforts on his side by contacting his counterpart at UNC Dr. Patricia McAnany, who had funding from a National Science Foundation (NSF) Grant, more specifically in the category of Catalyzing New International Collaboration (OISE). On my end, I contacted my employer RDO Integrated Controls and started securing the technological devices necessary to properly complete the work at hand. Swiftly Topcon Positioning Systems (TPS) and Laser Technologies Incorporated (LTI) were onboard with the donation of the use of a GLS-1500 Geodetic LiDAR Scanner and a Tru Pulse 360 handheld Laser Rangefinder.

The Pryecto Arquelogico Colaborativo del Oriente de Yucatan Project (PACOY) project for short has a general goal “to document archaeologically the households of the colonialized peoples who build the mission churches that still stand in testament to the dramatic social and political upheaval that accompanied Spanish incursions into the Yucatan.” We focused the project around mapping as the first primary tool to support the document. Not only does mapping provide a visual of what stands today, it gives us hints about what used to stand. Between the technology available, knowledge of the study areas, and skills at hand, we were able to accomplish this. 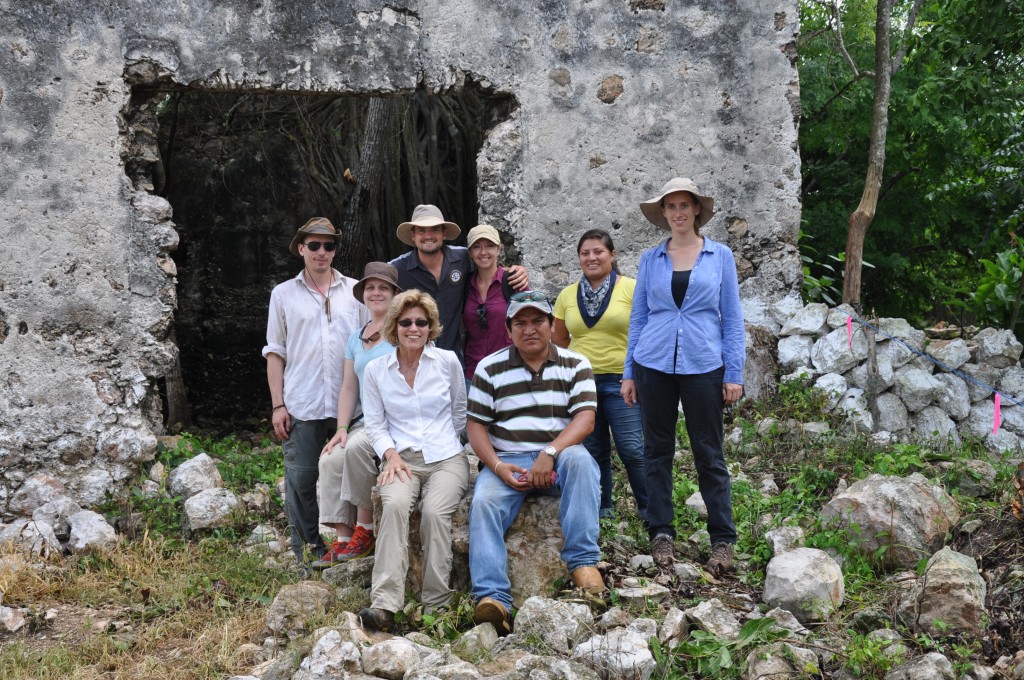 I was asked to topographically map the site locations using a GLS-1500, a base and rover GR-3, and the LTI range finder. Using standard surveying techniques my team created a strong set of control and three individual base station locations. Each control and base corresponded to each other and to the environment surrounding the positions.

Carefully plotting occupation and back-sight locations we traversed through the sites gaining nearly 100% scanning coverage. On each occupation point we setup the terrestrial scanner with specific conditional settings. From these locations, we took sequences of 310 megapixel high definition 360 degree photographs. Collected on top of the photographs were massive points clouds composed from the Light Detection and Ranging (LiDAR) sensor.

Using the GLS-1500, we were able to collect 150-500 meter coverage zones that each contained roughly 7.5 million points. These points were later classified, attributed, and used to create digital terrain models or DTMs. Above the grade the photos and points were used for asset identification and 3d modeling of ancient Maya and Catholic structures. To back up and to quality assure the scanning, traditional GPS points were taken at all structure corners and on all items of interest.

At the top is a geodetic photograph of a Maya family structure overlaid with a point cloud at the Chebalam site .Below is a geodetic scanned image of the Tixhulactun site.

During the next phase of the project, the data collected by the scanner will be used to predict subsurface collection zones. By carefully reviewing slight topographical changes and deviations on the ground’s surface, archaeologists will be able to synthesize possible habitation areas. Combing the spatial context of current physical features and historical building patterns allows these scientists to make comprehensive predictive models.

Furthermore, the data is also being used to create real virtual 3D models of important features among each site. These models will help preserve these features well beyond their tangible half-life. Using a technological device such as a geodetic scanner also allowed our team to have a “one and done” methodological approach to collection. This is due to the fact that further analysis could be done later in the lab and was not required to be done in the field. Because the scanner does not discriminate, we knew we were collecting all the data we needed. Never once did we have to wonder if we were missing something. A notion even the great Dr. Jones often rehearsed. 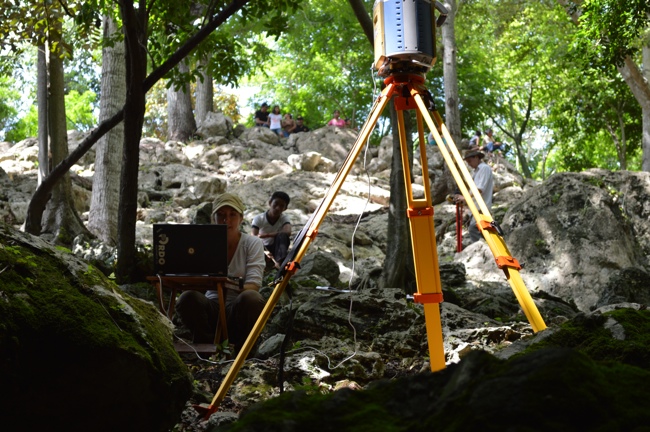 Here the geodetic GLS-1500 scanning crew captures rough terrain with the assistance of an interested local.

Aside from topography and structural significances, the archaeologists were also interested in correlating the use of nearby underground freshwater caves called “cenotes.” These cenotes were used by their ancient inhabitants just as they are used today by the modern people living there currently; a proximal water resource.

Cenotes are naturally occurring sink holes and caves that are created by erosion. Limestone is the pre-dominate ground covering feature of the Yucatan Peninsula. Over time, the limestone eroded and created pockets of fresh water the people harnessed for civilization. These pockets or sinkholes hold the essence of life, and as it is necessary, the act of retrieval became a subsistence ritual that continues today. Cenotes can be found within major Maya centers, like Chichen Itza, and smaller communities, like Chebalam, which was one of our study areas.

Using the Topcon scanner and a LTI portable range finder we sought to map these amazing structures. First we used GPS and the range finder to set control and to offset points in and around the openings of each cenote. Using the LTI Tru Pulse 360 range finder we were able to approximate the depth of water in relation to ground level. We also compared these findings to the water table level and to the close-by sea level. Once we collected this information, target scans were used to map the more macro elements. Through this process many interesting things started to come to light to the team, one of which was a possible thousand year old worn path to the cave’s entrance and that discrete cenotes had comparable water level elevations, leading to the belief that the cenotes are connected underground.

This geodetic scanned profile is of the main Tahcabo cenote, a local watering hole that forms naturally in the underlying limestone.

Traditionally, this type of archaeological mapping would be completed by laying out both horizontal and vertical grids. These grids would cover both the topography of the land, but also any key features such as the cenotes and other cultural structures. The grids would be laid out utilizing cardinal directions, standardized measurement distances, and other systematic methodologies. Each grid square would then be mapped and plotted. For features, detailed profile maps would be compiled using levels, tape measures, protractors, rulers, and scales.

These  conventional methods take a considerable amount of time, attention to detail, and strategy. Another factor to consider would be the intervention of human error and various environmental factors. This coupled with the length of time to complete the analysis can become very costly. By leveraging these new technological devices our team was able to quickly, efficiently, and confidently map our Maya sites.

Streamlined collection in the field and the ability to process the data later in the luxury of an office allowed for focused work. Utilizing remote sensing technologies we were able to collect the sites information on a macro scale. By surveying through exclusionary processes in one field season we were able to collect all the data needed to make the desired predictive models. Having the ability to later data mine these data sets can lead to expanded research. If anything, the data will always stand as a historical 3D representation of Tixhulactun, Tahcabo, and Chebalam in 2013 rendered by top-of-the-line ground-breaking technology available today. 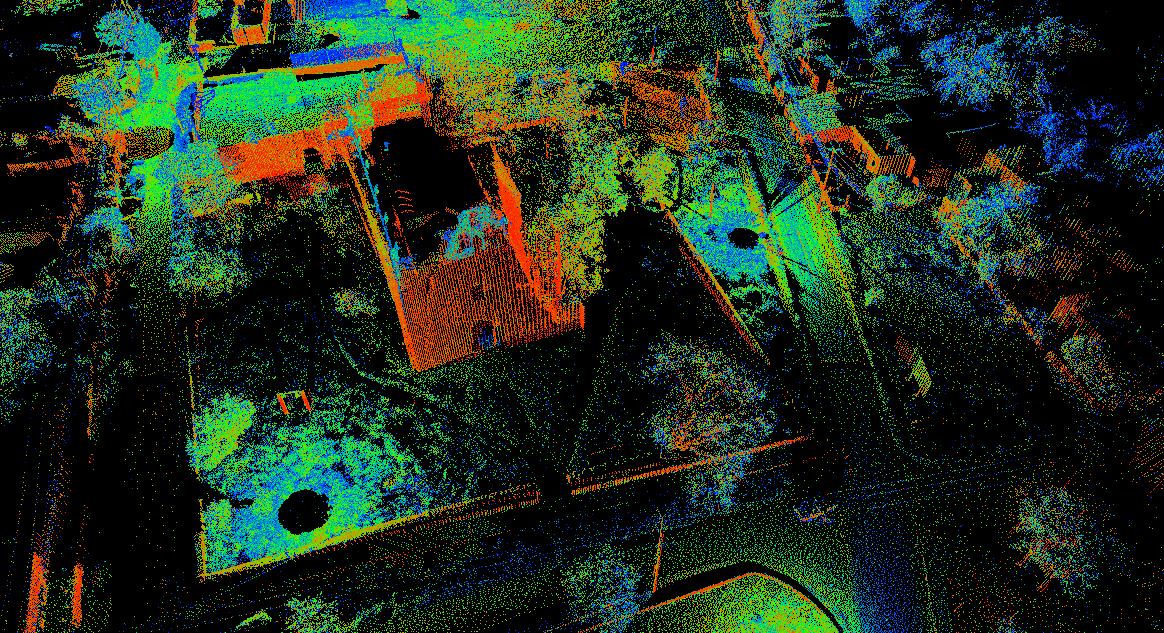 The detail of the scan can easily pick out depressions in the ground, such as these pathways on the Tixhulactun site.

The experience was amazing. It was truly a pleasure to be able to utilize these cutting-edge technologies to assist with the overall goals of the project. In our fast-pace, business-orientated culture, it was rewarding to be able to help with something larger than just the normal construction or civil design project. While the project is nowhere near being completed, the scans provided a great start.

Author’s Note: For further information on this project or other Maya archaeological projects please feel free to contact me personally. Without the dissemination of cultural knowledge, modern processes, and technological advancements we might all still be swinging from cliff to cliff by a bullwhip.

Nikolas Smilovsky currently serves as the lead Specialist of GIS and Scanning at RDO Integrated Controls. Nikolas also stands as an Adjunct Faculty Professor at Arizona State University’s School of Geographical Sciences and Urban Planning, instructing classes on GIS project management, field data collection and remote sensing. Nikolas received his Bachelors of Arts from the University of Florida and his Graduate degree at Arizona State University. Nikolas also has various certifications including his Geographical Information Systems Professional (GISP) and his accreditation as an ISA board Certified Arborist, WE-9505A.