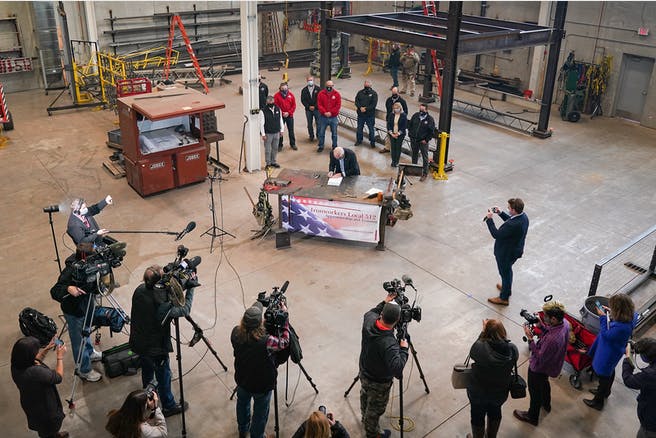 Gov. Tim Walz signed a $1.9 billion public works infrastructure package into law Wednesday, touting the jobs it will add as a growing number of Minnesotans have given up on looking for work amid the pandemic.

“The ability to create jobs, get them in the pipeline and be able to build is going to be absolutely critical for keeping these folks employed and keeping the state moving forward,” Walz said as he signed the bill at the Ironworkers Union Local 512 training center in St. Paul.

The measure included historic levels of state-backed borrowing for public projects, known as bonding, as well as additional state-agency spending and a tax break to help farmers and small businesses when they buy equipment.

It comes as many workers continue to struggle after losing their jobs during the COVID-19 pandemic, and as an increasing number of people have stopped looking for work. Minnesota Department of Employment and Economic Development data show the percentage of people participating in the workforce fell to 68.4% in September, the lowest level since 1978.

Legislators emphasized the importance of the bill to people in the construction industry as they broke through months of partisan disagreements to pass the deal last week. A bonding bill requires a 60% supermajority to pass, and both the House and Senate far surpassed that threshold despite clashes over election season politics.

Many Republicans had lingering doubts about the size of the borrowing and spending measure and the long-term impact they could have on the state’s projected budget deficit.

During the Senate debate, GOP Sen. Rich Draheim slammed the package as “full of pork, and we’re not talking the good pork.” He cited a number of projects related to the arts and humanities and community resources such as skate parks and public television. “When we started this year we talked about doing a bonding bill for basic infrastructure, not these earmarked projects throughout the state,” he said.

The law includes an element that hasn’t been part of past bonding measures. Under “Equity Appropriations,” the bill allocates money for communities that may have been left out of the funding process in the past. That includes $5.6 million for a family and child services facility for the Red Lake Band of Chippewa, $3.8 million for a Native American community clinic in Minneapolis, and $2 million for the Hmong American Farmers Association to buy farmland.

The bonding package also has provisions aimed at ensuring local governments follow the state’s workforce participation goals and equal-pay protections for communities of color and women as they hire contractors for publicly backed projects.

But it could be months before the infrastructure projects financed by the new bonds will get underway and create jobs for workers such as the union members surrounding Walz on Wednesday.

“At least our members have hope that there’s something at the end of the tunnel,” said Barry Davies, business manager for the Iron Workers. He said jobs that started pre-COVID are wrapping up. “Without the bonding bill … it would be kind of bleak.”