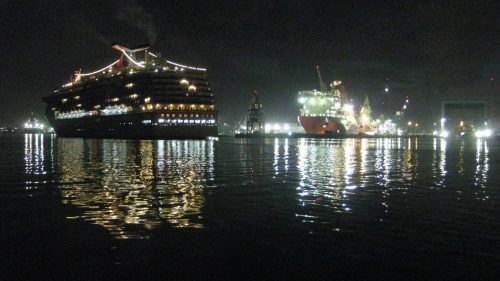 As reported by the AASHTO Journal: https://aashtojournal.org on July 20, 2020 - in News, Transportation

With non-essential travel largely ground to a halt due to COVID-19, the ability of various transportation segments – airports, the cruise line industry, and toll roads – to maintain revenues and passenger traffic volumes will be “an increasing challenge,” according to a new report issued by Fitch Ratings on July 14.

[Above photo by the Port of Tampa Bay.]

“Federal monies that airports can use for any lawful purpose and existing funds held in unrestricted reserves and construction accounts will soften the blow somewhat,” noted Seth Lehman, Fitch’s senior director, in a statement.

“That said, obtaining broad airline support will be more difficult until the aviation environment recovers,” he added.

As a result, he said airports are likely to either defer expansionary projects or scale back less essential projects altogether to offset cash flow weakness.

Meanwhile, Lehman pointed out that the Center for Disease Control’s current “no sail order” has put a lid on cruise travel through at least Sept. 15 and will put substantial pressure on cruise operator passenger levels through at least the end of the third quarter.

“Cruise lines at some ports invoked force majeure clauses under their contracts due to the coronavirus, which may provide cruise lines relief from meeting their minimum annual guarantee levels during their contract year if cruise operations are suspended for a long period,” Lehman said.

This also brings into question how traffic for nearby toll roads will be affected if cruise demand continues to hover at around 50 percent, he added.

“Lower cruise demand will undoubtedly have an effect, but it is doubtful it would be sufficient in isolation to lead to negative rating actions for toll roads,” Lehman noted.

“Regions that serve large numbers of cruise passengers like Miami and Fort Lauderdale have a significant tourism component to their economies, but tend to be midsize to large and growing with increasingly diverse economic activity,” he pointed out.