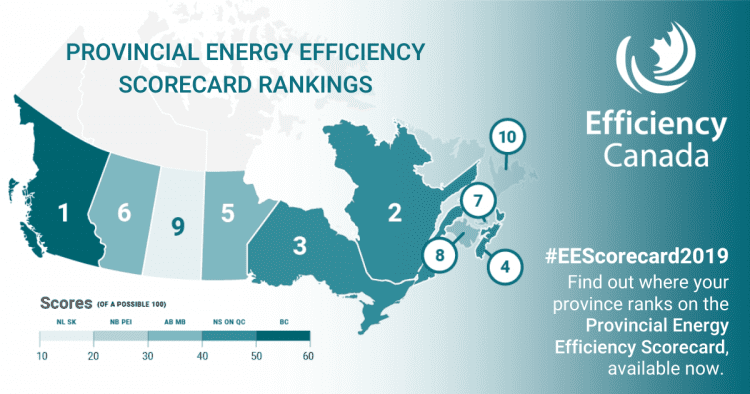 British Columbia earns top marks in the first-ever Canadian Provincial Energy Efficiency Scorecard, developed by the nonprofit Efficiency Canada to track and rank provinces on their efficiency policies and highlight opportunities for improvement.

ACEEE congratulates Efficiency Canada on today’s release of its new scorecard, which has been more than a year in the making. Together with its companion policy database, the scorecard seeks to provide a comprehensive resource to benchmark and improve energy savings across the Great White North.

Special kudos are in order for British Columbia, Canada’s westernmost province, for its adoption of a broad mix of successful efficiency policies across multiple sectors. Second and third place went to Quebec and Ontario, respectively.

As in the United States, where many policy decisions to support energy efficiency are left to the state and local governments, Canada’s important policy areas such as public utility regulation, building codes, and municipal planning fall under provincial jurisdiction. For this reason, provinces play a critical role in driving national energy savings from Vancouver to Nova Scotia, much as state governments have set the pace on efficiency across the United States.

The new scorecard seeks to capture these provincial-level efforts in ways similar to ACEEE’s own State Energy Efficiency Scorecard, tracking performance and policies on more than 20 metrics across five policy areas, including buildings, transportation, and industry.

For example, in 2017, British Columbia enacted the BC Energy Step Code, a voluntary provincial building standard that exceeds the base BC Building Code, and that local governments can choose to require or encourage builders to meet. The code takes a performance-based approach, rather than the traditional prescriptive approach, and is fuel-neutral, giving builders flexibility to determine how to meet the standard.

The regulation outlines a hierarchical progression of performance targets grouped into “steps,” which local governments can select for adoption. Upper steps are more ambitious and designed to move the province toward the goal of making all new buildings net-zero energy ready by 2032. More than 50 cities, representing at least 70% of the province’s residential construction, have already adopted these codes. British Columbia also has a long-standing carbon price, grid modernization initiatives, and commitment to vehicle electrification.

The scorecard’s release caps a busy year for Efficiency Canada, which had its official launch just one year ago with a mission to make Canada a global leader in energy efficiency. Housed at Carleton University’s Sustainable Energy Research Centre in Ottawa, the independent nonprofit organization has worked extensively with stakeholders across governments and utilities to craft and refine a robust and transparent methodology to evaluate provincial energy efficiency policies.

Alongside Dunsky Consulting and others, ACEEE is pleased to have participated in this process by sharing the lessons we have learned from 13 years of publishing our State Energy Efficiency Scorecard and helping apply them to Canada. We are impressed by the ambitious scope and sophistication of Efficiency Canada’s primary and secondary data-collection process, which in just a short time has yielded a detailed report and policy database that will serve as an invaluable resource for efficiency-minded policymakers and advocates.

While we caution against drawing any direct comparisons between scores in the provincial scorecard and those in the state scorecard, we’re very excited to see the latter’s influence cross national lines to serve as a model for our neighbors to the north, and we look forward to seeing the Canadian Scorecard’s success and evolution in the coming years.

Visit Efficiency Canada’s website to learn more about Canada’s provincial ratings and follow @EfficiencyCAN for the latest updates on efforts to advance energy efficiency throughout the Canadian economy.