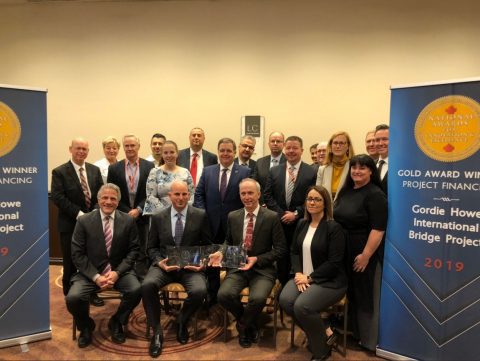 “The Gordie Howe International Bridge project further solidifies Fluor’s expertise in North America and as a leader in P3 development and the delivery of infrastructure megaprojects,” said Terry Towle, group president of Fluor’s Infrastructure & Power business. “We are honored to be recognized with this award and to partner with WDBA to design, build, finance, operate and maintain such a vital international link between Canada and the U.S. and the Windsor-Detroit region.”

The Gordie Howe International Bridge project is a planned bridge and border crossing spanning the Detroit River and connecting Detroit with Windsor, Ontario, Canada by linking Interstate 75 and Interstate 96 in Michigan with the new extension of Highway 401 (Rt. Hon. Herb Gray Parkway) in Ontario. It is the first new major trade link under construction between the United States and Canada in 40 years. The international crossing, which will be the longest cable-stayed bridge in North America, represents one of the largest recent private financings of a P3 in Canada with a total project cost of CAD $5.7 billion.

“This project is a once-in-a-generation undertaking, and when completed, will provide long-term benefits to communities on both sides of the border,” said Aaron Epstein, CEO, Bridging North America. “The innovative financial structure for the project, based on the international experience of our team, will set a precedent for the market. Our entire team is dedicated to working safely and collaboratively with our client on this project to deliver it on time and on budget.”

“The recognition received by industry this year for the Gordie Howe International Bridge project reaffirms we have a world-class project,” said Bryce Phillips, CEO, Windsor-Detroit Bridge Authority. “We are grateful to be recognized with the gold project financing award by the CCPPP. The approach taken to the complex procurement process and deal structure including technical, financial, legal and communications innovations will serve as best practices for future P3 projects.”

About Fluor Corporation
Founded in 1912, Fluor Corporation (NYSE: FLR) is a global engineering, procurement, fabrication, construction and maintenance company that transforms the world by building prosperity and empowering progress. Fluor serves its clients by designing, building and maintaining safe, well executed, capital-efficient projects around the world. With headquarters in Irving, Texas, Fluor ranks 164 on the Fortune 500 list with revenue of $19.2 billion in 2018 and has more than 53,000 employees worldwide. For more information, please visit www.fluor.com or follow Fluor on Facebook, Twitter, LinkedIn and YouTube