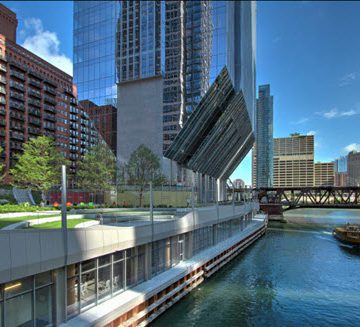 Learn more about this award-winning building by reading this feature article in Informed Infrastructure.

And the winner is …

“It’s amazing to be recognized by all of our colleagues, especially among all of the other projects that were amazing and totally inspirational,” said Ron Klemencic, whose company Magnusson Klemencic Associates was the project’s engineer of record. “To be recognized as the No. 1 project is unbelievable.”

The 54-story office building at 150 North Riverside fills a riverfront lot in Chicago’s burgeoning West Loop that sat vacant for more than a century.

And no wonder the lot remained empty for so long. It’s a tough spot on which to build, only 85 feet at its widest. But the Riverside Investment and Development ownership group, as well as the project team led by MKA, turned the small space into an engineering feat using a variety of technical innovations, including a concrete core structural system three times narrower than that of a typical office building and floor plans five times larger than its base.

“It came to us as a challenge that had existed for more than 100 years,” Magnusson said. “Nobody was able to conceive of building on the site. So working with the architect collaboratively, we were able to come up with a number of ideas of how we might, and it ultimately came up with this design. It was a collaborative process to try to do what nobody had done before.”

The other four OCEA finalists also were honored at the OPAL Gala – the New United States Courthouse in Los Angeles, the OARS-OSIS Augmentation and Relief Sewer in Columbus, OH, the Olympia Odos Motorway along the North Peloponnese Coast in Greece, and the SR 99 Alaskan Way Viaduct Replacement Program–Northbound Off-Ramp Bridge in Seattle. 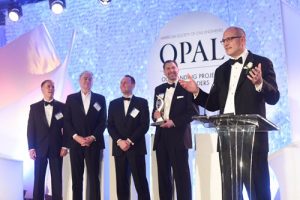 The OPAL Gala – referred to as the Academy Awards of civil engineering – brought together leaders from around the profession and around the world.