Oregon DOT Uses Technology to Keep up with Progressive Contractors

ODOT inspectors use the Windows 7-compatible DT Research model DT391GS tablet equipped with a GNSS antenna and MicroSurvey FieldGenius to stake out and check precise layout points as part of regular inspection duties.

In 2016, construction inspectors at the Oregon Department of Transportation (ODOT) had a problem, but in a way it was a good problem. “A lot of our contractors are using machine control now on our projects, a lot more than just five years ago,” explains ODOT Construction Automation Surveyor Chris Pucci. “That’s good, of course, because it’s efficient. But it also means that contractors are no longer necessarily setting stakes on projects. So our inspectors had no way to check progress without calling in a survey crew, and we don’t have a lot of extra surveyors.”

ODOT wasn’t concerned that contractors were trying to cheat. But “we had a few problems when inspecting stakeless projects,” notes Pucci. “On one job, for example, working with a really good contractor who’s usually topnotch, somehow the model was changed on a section of concrete roadway—we’re not sure how that happened. Without stakes to check, inspectors couldn’t check work against the original model, and a problem with the super elevations wasn’t discovered until after concrete was poured, and work worth tens of thousands of dollars had to be torn out.” 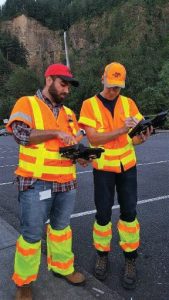 ODOT inspectors needed a way to do real-time checks on earthmoving and formwork so they could ensure quality and prevent costly errors, and they had to be able to do these checks without calling in a survey crew. The solution turned out to be simple, at least in concept: put accurate, GNSS-enabled survey capacities in the hands of inspectors. They then would be using the same technology that powers stakeless, machine-controlled projects.

But easier said than done, of course. ODOT embarked on a multi-month evaluation process to identify a tablet-based solution that would make surveying expertise available to inspectors, while also working well with their existing technology “ecosystem” … and the tablet interface had to be intuitive enough for inspectors to quickly learn how to reliably do the necessary work without months of training.

The equipment and software solution needed was eventually found, worked well for inspectors, and eventually proved to be so useful that it’s now being used by ODOT biologists and archaeologists, the pavement and environmental groups, and “anyone who needs to collect precise positional data,” adds Pucci.

“It’s been fun rolling out a new idea,” he continues. “It’s been a learning experience for everyone and a whole new way of looking at work.”

The DT391GS’s flexible GNSS and RTK capacities were absolutely critical. According to an internal ODOT report on the evaluation process and pilot project:

“The RTK corrector is another critical piece to the puzzle. Traditionally, contractors have used onsite radio base stations for AMG operations. To provide a truly independent GNSS check, ODOT decided to not use the contractor’s base station corrector as part of its inspection process.” 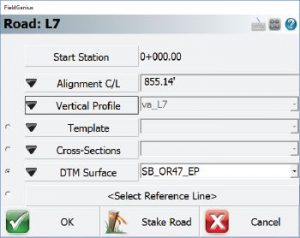 The new RTK-enabled tablets are compatible with the XML files that are standard at ODOT, making grade and position checks easy and routine. 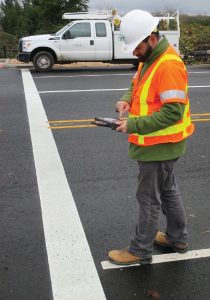 The new tablet met this challenge by providing direct access to Oregon Real Time GNSS Network (ORGN), which is managed by ODOT and provides GNSS RTK solutions via the internet. In addition, ODOT felt the software solution needed to be “compatible with the tablet, provide an RTK GNSS solution, use LandXML files directly, have the ability to use the Oregon Coordinate Reference System (OCRS) map projections, and be simple enough to use that a non-surveyor could operate it.”

MicroSurvey FieldGenius met these criteria and was an existing solution with a good track record that immediately provided the ability to “provide real-time station and offset, elevation, and cut/fill to a surface model.” In addition, FieldGenius could be used for point checking and the collection of survey data, and it was designed for easy operation. When doing survey work to check contractor work and models, inspectors use FieldGenius, the tablet and ORGN to achieve real-time accuracies of +/-0.04 feet horizontally and +/- 0.08 feet vertically. 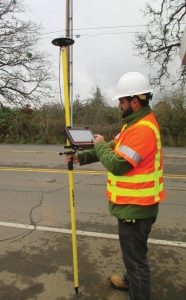 Windows 7 compatibility was a very important feature, not just for ease of use in the field, but because ODOT is standardized on Windows 7 agencywide. “That made it really easy to get FieldGenius authorized to run on our system,” says Pucci. “Problems with compatibility would have made adoption more difficult.”

LandXML compatibility also was important. “For us, directly reading XML files is a big benefit,” Pucci explains. “We’re standardized on XML, and we’ve been sending XML files to contractors for years. We didn’t want to ask our designers to learn or use a new file format, and we didn’t want our inspectors to have to load MicroStation or some other ‘middleman’ on the tablets—all they need is FieldGenius, and they can work with the original design models directly.” Even more importantly, FieldGenius didn’t need extensive customization to work within ODOT’s inspection scheme. “We were able to use FieldGenius right out of the box, just as it’s sold to anyone,” notes Pucci. 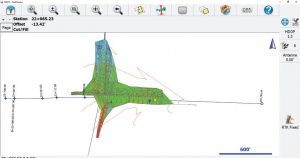 Interoperability with XML files makes it easy for ODOT inspectors to locate and check critical points on large projects via FieldGenius.

After considering several other possibilities, ODOT felt it had found the optimal combination of hardware and software for its needs. However, big agencies move deliberately, and a substantial pilot project was needed before a general rollout of new technology.

Ten complete, FieldGenius-equipped tablet kits were purchased and, per the internal report: “Five construction offices were selected for the pilot project phase, resulting in about 40 people attending training. All of the initial training was completed in a two-month period. The tablets were very well received, and the participants acquired a solid working knowledge of them.” Also per the report: “During open discussion at the training, the participants came up with quite a few uses that had not been envisioned when the project was being developed.” Following the training, the tablets and FieldGenius were immediately deployed. According to the report:

“The software allows the inspector to work with multiple alignment files, enabling them to know their exact station and offset to any alignment at any location on the job. They are also able to work with 3D surface models to determine their cut or fill at any point on the model. If they have a surface model for a road, they can check the contractor’s work to the accuracies of GNSS. Points can be collected as well as lines and area features. If an area is collected, the area calculations can be displayed immediately for use on field notes or to support pay notes.”

Two months is a short period for initial training on new equipment and workflows, but according to Pucci, training since then has been even faster. “Most new trainees are surprised that the tablets are so easy to use, and I’m usually able to get new people up and running in just a day,” he notes. It helps that, as stated in the report’s conclusion, “the MicroSurvey FieldGenius software is very forgiving and, if accidentally closed or crashed, can be restarted and a project reloaded in about 45 seconds. Most users have been able to get to a comfortable level of operation in about one hour.”

This pilot test was conducted in fall 2016; after the pilot was completed, the tablets were rolled out to all 15 ODOT offices. Currently, about 50 are being used by inspectors, paving crews and ODOT biologists, and Pucci expects to provide more for archaeologists, environmental engineers, and other staff who collect precise positional data. Traditional survey crews also are requesting the new solution.

“Even contractors love it,” says Pucci. “There’s no longer any dispute about measurements, they trust our values, and this speeds up payments. The tablets and FieldGenius have turned out to be a very good tool for us.”