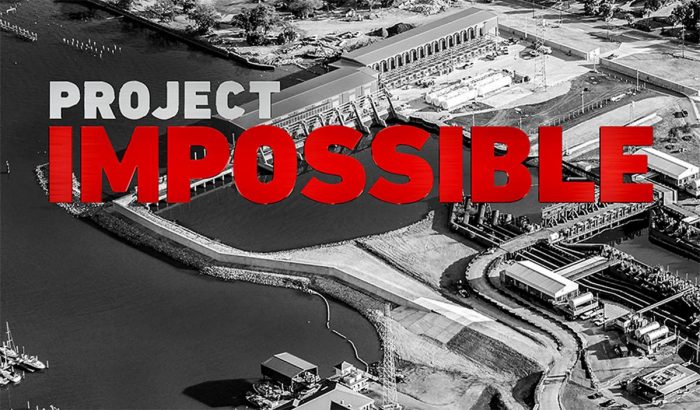 Parul Dubey on July 30, 2018 - in News
HISTORY is launching a new television series called Project Impossible and Stantec-designed projects will be featured in two of the ten episodes. The season will kick off at 10PM on July 27th, 2018 on the HISTORY Canada. Watch the trailer here.

The first of two installments involving Stantec, “Episode 6: Engineering America”, will air on Saturday, July 28th at 2PM PDT and captures the Permanent Canal Closures and Pumps Project (PCCP) in New Orleans, Louisiana. The PCCP is one of the largest drainage pumping systems in the world and completes a multi-billion-dollar hurricane risk reduction system for the vulnerable US Gulf Coast city.

The second Stantec project will be featured in “Episode 9: Conquering the Arctic” and air on Saturday, July 28th at 4PM PDT. The segment focuses on the Stantec-designed Iqaluit Airport, the first completed P3 Airport in North America. The Iqaluit Airport is one of Canada’s northernmost flight hubs and was built to serve the remote territory of Nunavut with its challenging polar climate.

About Project Impossible
Project Impossible is an original series that follows a new generation of epic engineering projects that were considered unthinkable just a few years ago. Each episode of Project Impossible features multiple stories that illustrate man-made projects that are crucial to our future. These projects include a massive North Sea wind station with 600-foot rotors, a giant sea wall that will protect the ancient city of Venice from rising waters, the world’s largest moveable structure in Chernobyl, and the construction of a fleet of nuclear powered icebreaking ships.