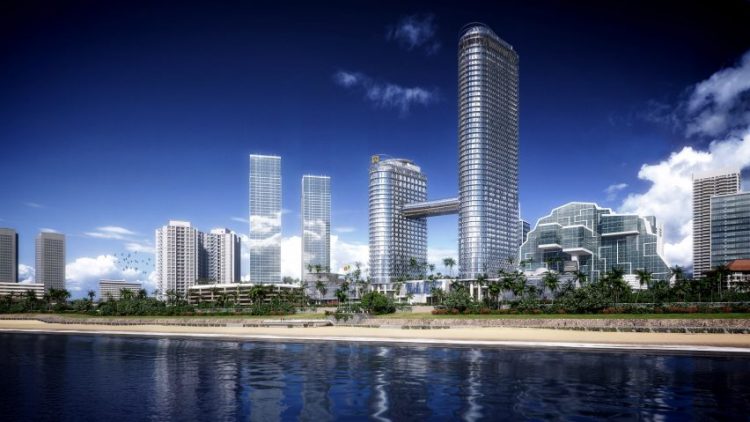 Parul Dubey on July 30, 2018 - in News, Projects
The Gensler-designed Sapphire Residences in Colombo, Sri Lanka, will be connected by a sky bridge topped with a swimming pool, and have interiors by Philippe Starck.

Global architectural firm Gensler designed the skyscrapers for developer ITC Hotels. The shorter tower will be a 140-metre-tall hotel, while the taller one will reach 224 metres and will be filled with 132 luxury homes.

Between the 19th and 21st floors the parallel towers will be connected by a 54-metre-long sky bridge. A bar and lounge will be located on the lower levels, with sun decks and swimming pools on the upper level.

A helipad will top the taller of the towers for VIP guests and residents to use.

Gensler has used a triangular plan for the two towers, so their two long sides face towards the ocean front, maximising views over the bay.

Most floors will have four-metre-high ceilings, rising to five metres for the penthouses that have 180 degree views of the water.

The entire structure will have an illuminated exterior at night, so each room will be fitted with blackout blinds to ensure its inhabitants can get enough sleep.

Each apartment will come pre-wired for a home automation system so that they can connect to the internet of things and be fitted with technology such as voice recognition room controls.

Gensler is the architecture firm behind the Shanghai Tower, China’s tallest skyscraper.

Other notable projects include a glass skyslide that will be suspended  304-metres in the air on California’s tallest tower, and a bone-shaped swimming pool for dogs at JFK airport.