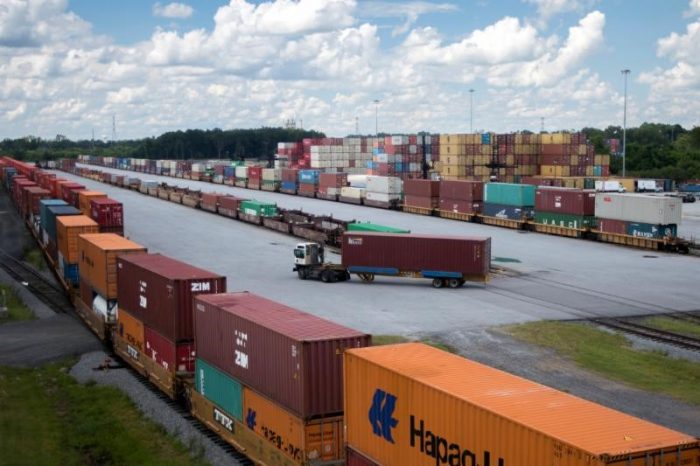 Savannah, Ga. – On the heels of reporting 32 percent growth in containerized trade for October, an all-time record for Savannah, the Georgia Ports Authority approved rail and gate expansion projects that will significantly increase capacity at GPA’s Garden City Terminal – the single largest container terminal in all of North America.

“A strong Southeast U.S. economy, on-terminal expansion, and investment by private logistics firms throughout the region have resulted in phenomenal growth for Georgia,” said Executive Director Griff Lynch. “But these record volumes could not have been possible without the tireless dedication of the men and women responsible for moving this cargo. From the GPA and the International Longshoreman Association, to the stevedores and logistics community, thank you for a job well done.”

In addition to record container volumes, Lynch reported to the Board that total tonnage for all terminals climbed by 25 percent, from 2.6 million to 3.2 million tons, for an additional 661,290 tons of cargo. Breakbulk tonnage, primarily the movement of lumber, steel and autos, also increased by 14.7 percent, signifying the growing strength of construction and manufacturing in the U.S. Southeast, he said.

On Monday, the board approved expenditures of $42.27 million as part of GPA’s $128 million  Mason Mega Rail Terminal. The project will not only expand the Port of Savannah’s on-dock rail capacity by 100 percent, but position Savannah to rapidly increase service to an arc of inland markets from Memphis to Chicago. A total of $90.7 million has been allocated to the project thus far. Construction is slated to begin next month and be completed by the end of 2020.

“What makes Georgia and the Georgia Ports Authority a continuing success story is the relentless effort to stay one step ahead of the curve and the competition,” said Jimmy Allgood, GPA board chairman. “The projects approved today will do exactly that.”

The board also approved a $13.2 million project to expand the existing Gate 8 at Garden City Terminal. The addition will help the GPA seamlessly absorb future growth and offer a better link to the Jimmy Deloach Parkway, which provides a direct truck route to Interstate 95. The project will expand the terminal’s gate infrastructure by 12.5 percent for a total of 54 truck lanes.

“In addition to expanding capacity, we will also reduce the impact on our local community,” Lynch said. “The new pre-check lanes will reduce truck congestion and the Mega Rail Terminal will significantly reduce or eliminate rail crossings.”

Find print-quality images of port operations here. Georgia’s deepwater ports and inland barge terminals support more than 370,000 jobs throughout the state annually and contribute $20.4 billion in income, $84.1 billion in revenue and $2.3 billion in state and local taxes to Georgia’s economy. The Port of Savannah handled 8.5 percent of U.S. containerized cargo volume and 10 percent of all U.S. containerized exports in FY2017