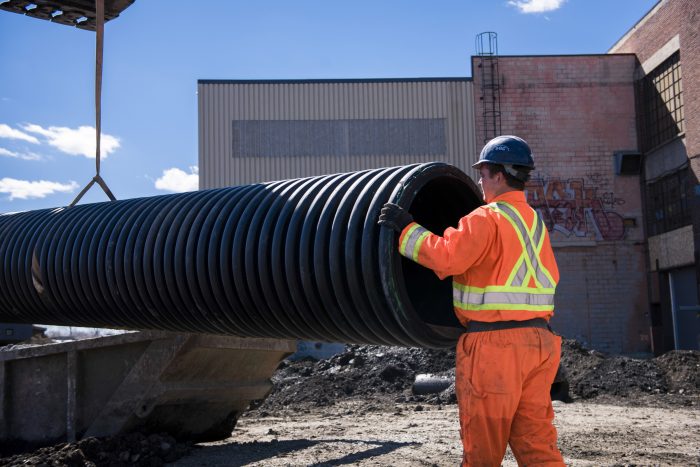 IRVING, Texas – The redevelopment of the former Canadian National Railways repair complex was named Project of the Year by the Plastics Pipe Institute, Inc. (PPI).  The project used large diameter corrugated high-density polyethylene (HDPE) pipe in a  new storm water drainage system that met local codes and would be able to stand up to the contaminated soil.

“During 2017, Montreal is celebrating its 375th anniversary,” commented Tony Radoszewski, CAE, president of PPI.  “A large part of the city underground infrastructure was built early in the 20th century.  The city keeps expanding and the current infrastructure system has difficulty keeping up with this expansion.  Like many places in the world, old industrial and contaminated sites that have been long forgotten are now being redeveloped and rehabilitated for other purposes such as housing and retail space just like Pointe-Saint-Charles, known locally as ‘The Point’. 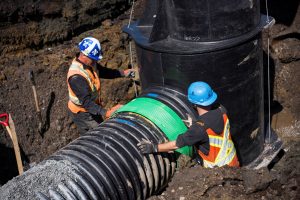 Connection of the large diameter HDPE pipe to manholes was easy and efficient at the site. Inlets and outlets were added to the HDPE manhole at the factory.

“This project is on difficult and contaminated terrain, HDPE pipe was selected to serve as the backbone of the infrastructure.  The pipe selection was based on criteria that included ease of installation and resistance to contaminated soil.  It became evident that HDPE pipe was the only solution that would ensure the sustainability of this underground infrastructure project.  It was an honor to present the Corrugated Plastic Pipe Division’s Project of the Year award to Soleno.”

PPI is the major North American trade association representing all segments of the plastic pipe industry.  An annual event, submissions for the Project of the Year are voted upon by PPI members with the winners selected based on the contribution to the industry and the beneficial use of plastic pipe.

As part of a new commercial complex in Pointe-Saint-Charles, a complete storm sewer system had to be built under a 300-space parking lot that would comply with the municipal requirements for storm water management.

Due to soil contamination from the maintenance of rail cars on the site by Canadian National Railways for more than 70 years, the lot had to be decontaminated to a suitable degree, but still remains corrosive.  Contractor Pavage Dion, Inc. (Boisbriand, QC) elected to use   Solflo Max®  HDPE pipe because of its durability, light weight and savings from efficient on-site installation.  More than 2300 m (7546 ft) of Solflo pipes and Solflo Max ranging from 150 mm (6 in) to 750 mm (30 in) in diameter were installed.  The project included ten catch basins of 600 mm (24 in) in diameter and about ten manholes with smooth exterior walls, ranging from 900 mm (36 in) to 1500 mm (60 in) in diameter.

Because HDPE is chemically inert it will not react with the contamination in the soil on site and has a longer lifespan than reinforced concrete pipe (RCP).  According to PPI, HDPE is resistant to corrosion, abrasion, de-icing salts and vibration, ensuring the sustainability of infrastructure.

“The conditions found at this site would have greatly reduced the lifespan of concrete if it was used for this project,” explained Daniel Currence, P. E. director of engineering for PPI’s Corrugated Plastic Pipe Division.  “Constructing the storm sewer system using HDPE pipe enabled Pavage Dion to ensure the sustainable integrity of the sealed, watertight system.  It was important for water to stay in the pipeline and equally important that no water with possible contamination from the surrounding soil be able to infiltrate into the pipeline.  Additionally, the corrugated HDPE pipe used meets ASTM standards for F405 and F2306, and complies with Canadian Standards Association, CAN/CSA B182.8 and Bureau de Normalisation du Quebec BNQ 3624-120.”

In addition to the pipe, the project incorporated HDPE manholes, which unlike conventional concrete manholes do not require any oversizing.  This reduces the diameter of the manhole, lowers the cost of the manhole and reduces the labor and time for excavation and installation.  The required inlets and outlets were added at the factory, also adding to the efficiency of installation.  The HDPE manhole has a smooth exterior wall to prevent vertical movement during freeze and thaw cycles. 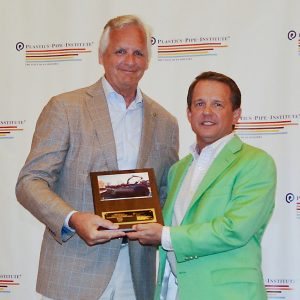 Receiving the Project of the Year Award for the Corrugated Plastic Pipe Division from PPI President Tony Radoszewski (right) is Claude Labrecque of Soleno.

“The city of Montreal waterworks and sewer department, like many other utilities, is very conservative,” related Radoszewski.  “Concrete and ductile iron are still the material of choice on most projects.  Approving HDPE for this application shows that the city is widening its bidding process and that HDPE is now being evaluated as a credible alternative to traditional materials.  And we again congratulate Soleno for winning this Project of the Year Award.”