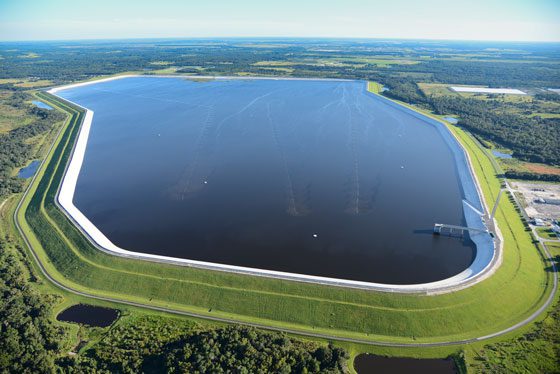 Gannett Fleming received the Grand Award in the water resources category for its work on the C.W. Bill Young Regional Reservoir at the Florida Institute of Consulting Engineers’ (FICE) Engineering Excellence Awards ceremony on August 4.

“Our team designed a solution that requires minimal maintenance and low long-term repair or replacement costs, a benefit that will help ensure optimal performance for the more than 2.4 million customers that it serves,” said Daniel Stare, PE, geotechnical engineer and project manager. “Making the region’s water supply more reliable and flexible through reservoir improvements is an example of Gannett Fleming’s drive to improve the quality of life of the people we serve.”

As design engineer, Gannett Fleming worked in collaboration with owner Tampa Bay Water and contractor Kiewit Infrastructure South. The renovation resulted in the restoration of the 5-mile long reservoir, which holds 15.5 billion gallons of water. The design called for demolition of the existing upstream armoring system, excavation of the underlying soil wedge, removal of the existing geomembrane, the addition of a PVC geocomposite and gravel drain, and construction of stair-step soil-cement armoring on the upstream slope.

This recognition marks the third award for the C.W. Bill Young Regional Reservoir project. It received an Honor Award at the National ACEC 2017 Engineering Excellence Awards ceremony and was also named the Project of the Century by the Florida Department of Environmental Protection in 2016. It is also featured in a 3-D animated video, which showcases the project’s innovative, ground-breaking features, including a first-of-its-kind Carpi Tech geocomposite liner, a state-of-the-art seawall, and a custom-built lift edge machine.

The Engineering Excellence Awards panel of experts rates outstanding contributions to the consulting engineering profession on many factors, including innovative applications, future value to the profession, and complexity. Gannett Fleming was presented the award during the 101st Annual Conference FICE Banquet in Palm Beach, Florida.