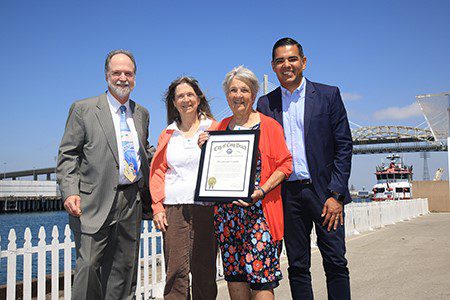 Span served Port, City and region for more than 50 years

The Gerald Desmond Bridge, a critical transportation corridor that served the Port of Long Beach for more than 50 years, was officially retired in a special ceremony with Desmond family members in attendance on Saturday.

Opened in 1968, the Gerald Desmond Bridge was named after a former Long Beach city attorney and city councilman who helped secure funding to build the 5,134-foot-long through-arch bridge that connected Long Beach and Terminal Island. Desmond died when the bridge that would be eventually named for him was under construction.

The Gerald Desmond Bridge was decommissioned when its replacement opened to traffic in October 2020. An outlook on the new bridge will be named in Desmond’s honor.

Removal of the Gerald Desmond Bridge’s main span was previously rescheduled to another day, but the retirement ceremony was held Saturday morning as originally planned.

“The Gerald Desmond Bridge has been a landmark of our city and an important part of our region’s infrastructure for over 50 years,” said Long Beach Mayor Robert Garcia. “We have come an incredible way since it opened in 1968 and it’s played an important role in the growth of Long Beach and success of the port.”

“Gerald Desmond will always be remembered for securing the Tidelands oil funds that were needed to help pay for a bridge that helped the Port of Long Beach grow to where we are today,” said Port of Long Beach Executive Director Mario Cordero. “We hope that this retirement ceremony is a fitting tribute to his legacy and for the Desmond family as we look ahead to the next chapter for this port complex.”

“We bid a fond farewell to a bridge that helped the Port thrive in a competitive industry, and honor the man for whom it was named,” said Long Beach Harbor Commission President Steven Neal. “We will always remember Gerald Desmond for the contributions he made to this City and this Port.”

Jerry Desmond tightened a “gold bolt” to one of the arches on the bridge bearing his father’s name during a dedication ceremony held in 1968. A video presented Saturday showed Desmond retrieving the specially crafted bolt as part of the bridge’s retirement.

“My father was dedicated to fighting for and preserving the rights and interests of the City of Long Beach and the Port of Long Beach,” Desmond said. “Our family was deeply honored when the bridge was named for him, and we were happy to honor him once again during the bridge retirement ceremony.”

The Port of Long Beach is one of the world’s premier seaports, a gateway for trans-Pacific trade and a trailblazer in goods movement and environmental stewardship. As the second-busiest container seaport in the United States, the Port handles trade valued at more than $200 billion annually and supports 2.6 million trade-related jobs across the nation, including 575,000 in Southern California.

Comments are disabled
NEXT ARTICLE
Skanska builds science laboratory building for university in Virginia, USA, for about USD 70M, about SEK 650M
May 10, 2022
PREVIOUS ARTICLE
The Department of State Celebrates the Groundbreaking of the New U.S. Embassy in Doha, Qatar
May 10, 2022