/ News / The Department of State Celebrates the Groundbreaking of the New U.S. Embassy in Doha, Qatar

The Department of State Celebrates the Groundbreaking of the New U.S. Embassy in Doha, Qatar 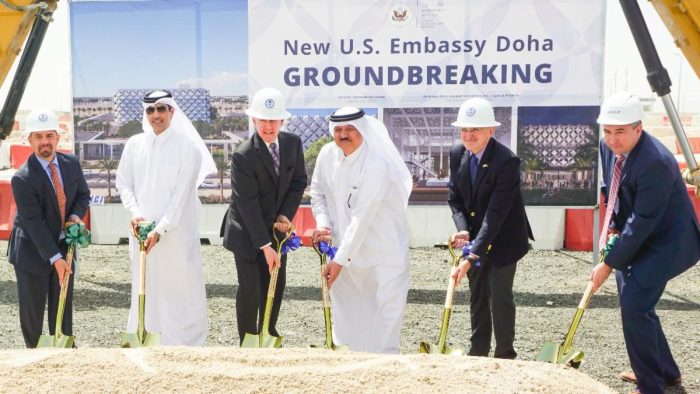 Highlighting the deepening ties of friendship between the United States and Qatar, the Overseas Buildings Operations (OBO), the U.S. Mission in Doha, and other U.S. and local officials broke ground today for a new U.S. Embassy in Qatar’s capital city.

Located on a 12.3-acre site in a new diplomatic zone in Doha’s Wadi al Banat district, the new U.S. Embassy will support the continued expansion of U.S.–Qatari diplomatic, security, and commercial relations.

Richärd Kennedy Architects of Phoenix, Arizona, is the design architect, American International Contractors Inc. (Special Projects), of McLean, Virginia, is the Design/Build contractor, and KCCT of Washington is the Architect of Record. An estimated $110 million will be invested in the local economy and approximately 1,200 third-country nationals will be employed during construction. The new U.S. Embassy is scheduled for completion in 2026 and will provide a future-forward, resilient platform for diplomacy in Doha.

Learn more about the project here.