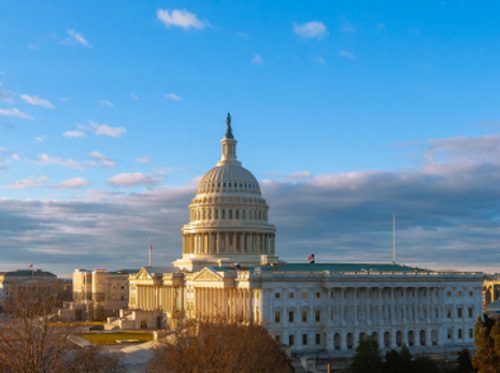 As reported by the AASHTO Journal: https://aashtojournal.org on August 10, 2021 - in News

Following the release of the full legislative text of the $1.2 trillion “Infrastructure Investment & Jobs Act” or IIJA in the Senate on August 1 – a bill clocking in at 2,702 pages – a large number of transportation industry organizations sent a letter to Congress calling for its passage.

[Above photo by the Architect of the Capitol]

That August 3 letter – spearheaded by the American Association of State Highway and Transportation Officials, American Road and Transportation Builders Association, and the U.S. Chamber of Commerce – includes support from 82 national organizations and labor unions. The letter urges all senators to support the legislation through procedural votes and final passage in the coming days.

“The investments made in the Senate package would facilitate long overdue repairs and improvements to our roads, bridges, rail, and public transportation systems, as well as investing in airports, ports, broadband, and water systems,” the letter noted. “The investments would create new jobs through project construction in the short term, and provide improved safety, mobility, and quality of life for decades to come.”

The IIJA also directly reauthorizes federal transit programs based on the Senate Banking Committee input, as that committee did not pass a transit reauthorization bill prior to the unveiling of the IIJA on July 28.

AASHTO noted that this bill is the result of an “unconventional process” whereby a “bipartisan bloc” of 21 Senators – comprised of 10 Republicans and 11 Democrats – took leadership of this package regardless of their committee assignments.

Because of their weeks-long negotiation, the IIJA provides $113.3 billion in advance general fund appropriations for various forms of infrastructure – including transportation – “above and beyond” authorization and funding from trust funds.

While traditional general fund authorization of program funding is subject to annual appropriations action and cannot be seen as “guaranteed” money, IIJA advance appropriations will provide guaranteed funding between fiscal year 2022 and 2026 for certain programs outside of the Highway Trust Fund.

The Senate should wrap up consideration of amendments to the IIJA soon, followed by a cloture vote to end debate on the bill ahead of scheduling a final vote.