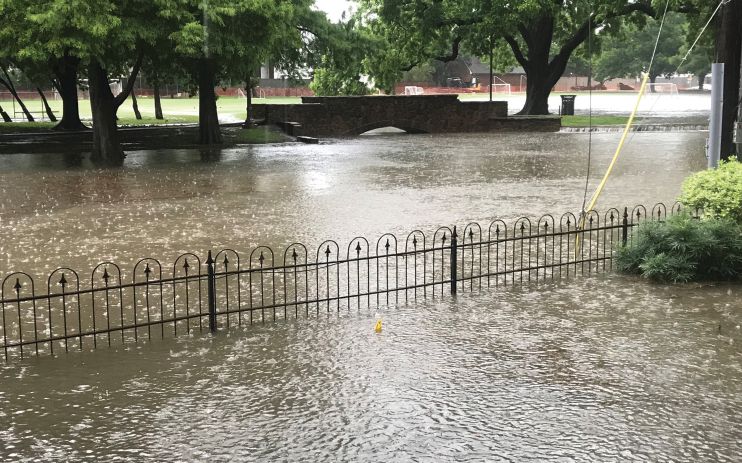 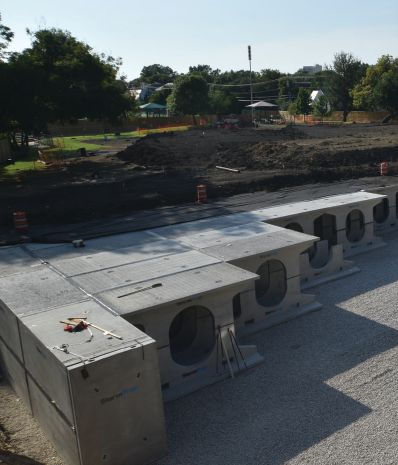 Photos show a “timeline” moving from severe flooding in Caruth Park before a new water-detention master plan was initiated, the StormTrap water-detention system being installed, and the final new field after project completion(below) 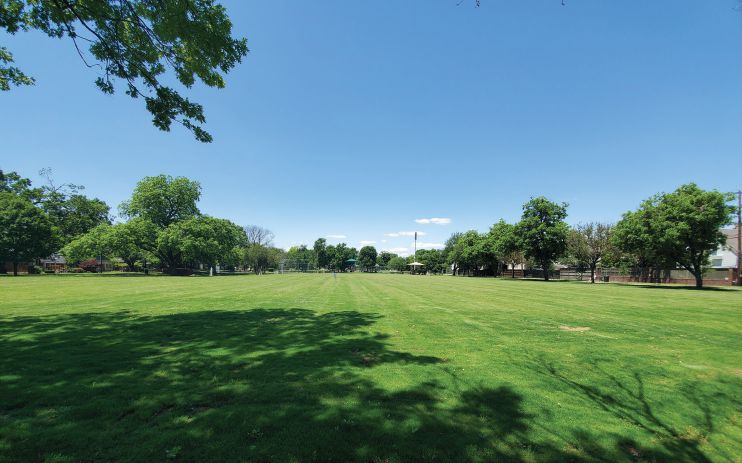 An excellent example of such master planning can be found in University Park, Texas, which is surrounded by Highland Park to the south and on three sides by Dallas. Incorporated in 1924 around Southern Methodist University, the city now is completely built out, primarily with residential properties.

Its drainage system was installed between 1925 and 1955, with parts of it covering an old creek. Parks were established, and a few ponds were created, but no significant upgrades have been made to the system in more than 65 years.

In recent times, 50 percent of the area’s rain events have exceeded the system’s capacity, with stormwater collecting in low-lying areas. A 2019 storm event that wasn’t even a 10-year storm flooded streets and caused property damage. It became apparent University Park had to create more system capacity.

“From a community-needs perspective, primarily we were trying to reduce the impact of high-water events and loss of life,” notes Katie Barron, P.E., ENV-SP, University Park city engineer. “We needed to maintain serviceability of our park and streets, and try to keep that water within the right-of-way to minimize impacts to our residents.”

Doing so entailed reducing a significant amount of flooding in the low-lying areas during major rain events while maintaining the current release rate. Highland Park is downhill and receives the vast majority of the stormwater, notes Barron.

“We couldn’t just upsize the pipes to capture all that water and then send that down to them,” she points out. “We needed to keep the same release rate. That meant we needed detention.”

The city brought on engineering company Huitt-Zollars to assist in its stormwater-management efforts.

In 2019, the firm studied Upper Turtle Creek Basin A, which encompasses approximately 500 acres of University Park and Dallas.

Each option considered a set of improvements, a review of historical rainfall data and an estimated construction cost.

“Some of the issues observed in the basin include undersized storm-drain systems,” adds Bell. “This promotes extensive surface ponding.”

University Park chose the 10-year storm event solution and requested Huitt-Zollars advance a portion of the proposed improvements for a particular area within the city that experiences extensive and frequent inundation during very small storm events that repeatedly resulted in road closures.

Concept plans for the advanced alternatives area included identification of potential utility conflicts, recommended project phasing and cost estimates. With runoff moving through the basin quicker, adverse impacts to downstream properties would be inevitable; therefore, a stormwater detention solution would be required.

The options were fairly limited due to the density of development in the area, with limited open space available for above-ground detention.

“One reason we selected this product includes its high-volume storage efficiency,” says Bell. “The quick installation process also was key, as it would help minimize disruption of the park and limit inconveniences that come with construction.”

Because the city is completely built out, constructing the solution meant utilizing the park zone for detention.

Hamilton Dallagasperina, P.E., a Huitt-Zollars project manager, noted the key aspects considered during the design phase focused on maximizing the storage volume within the available footprint and determining the water-table location and buoyancy effects to the system. Other considerations included foundation and backfill material, maintenance concerns and construction challenges.

XPSWMM modeling software was used in the planning stages. The system is located under a soccer field, and its depth ranges from 1.5 feet to 3.5 feet.

“The volume was maximized by working the geometry of the system for the best fit within the horizontal and vertical constraints, while preserving trees and other park features,” says Dallagasperina.

As construction began, a gas-line conflict was noted, with plans established to relocate it during the second phase to make room for a weir diversion structure. Dallagasperina points out that knowing the water-table elevation is essential for control of groundwater during construction and determining the potential for buoyancy effects to the installed system.

Four bores were drilled to determine the strata construction crews would be dealing with underground as well as water-table information. One bore was left in place to continually monitor the groundwater. The water table is between five and six feet below the surface.

“The water table is relatively high because it is close to a pond and an old creek bed,” points out Dallagasperina. The shallow water table required buoyancy effects to be looked at and addressed. A PVC perforated pipe was installed around the outside perimeter of the system to capture groundwater and control the water table elevation. The pipe was connected to the outfall pipe from the detention facility.

“We considered installing a filter fabric to prevent granular backfill sediments from entering the pipe, but decided against it due to the risk of the filter fabric becoming clogged with sediment,” he adds.

Access devices were installed at different locations giving maintenance crews the ability to access and flush the PVC pipe clean when needed.

Another challenge was excavating into hard rock. Grey limestone was encountered at one of the site borings 13 feet below surface, which proves difficult and time-consuming to excavate.

The excavated subsurface preparation consisted of a six-inch-thick leveling pad comprised of five-eighths-inch stone aggregate material. The same stone aggregate was used as backfill material. Geotextile was placed around backfill and on top of the system to prevent soil migration. 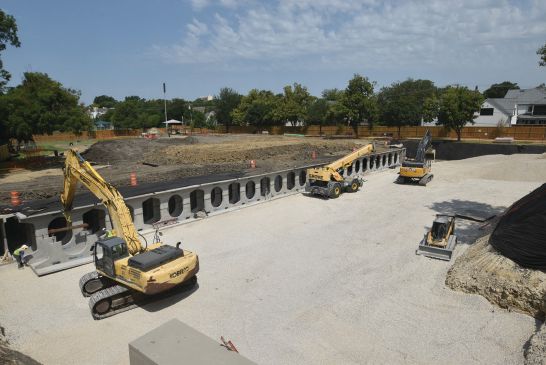 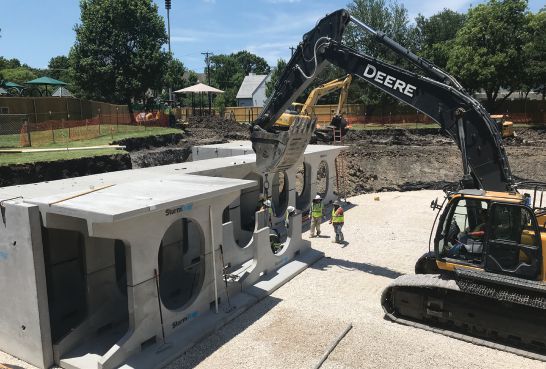 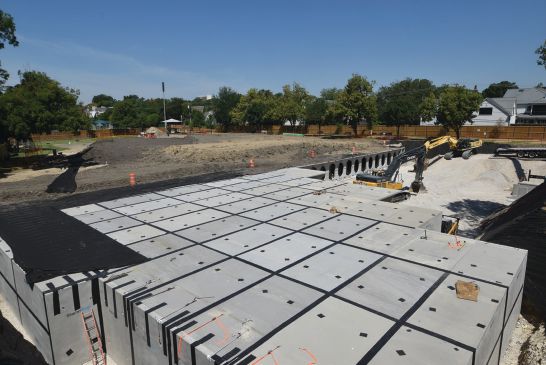 Photos show the construction of StormTrap, an underground detention structure in Caruth Park to increase the capacity of the city’s stormwater system by 11 acre feet.

After the bedding was leveled in place, unit installation went very quickly, notes Dallagasperina. A dedicated construction site entrance and exit allowed for efficient movement of trucks, with routes coordinated to where truckers could deliver the load and leave, or pick up dirt and leave. A specific truck route was established offsite to divert the trucks from driving through local neighborhood streets.

Approximately 30,000 cubic yards of material—basically clean dirt that could be reused—was removed through 2,500 truckloads. Some of it was put back on top of the StormTrap system before the topsoil was applied. Some 788 StormTrap units were installed and will provide a little less than 11 acre-feet of storage. The system is designed to handle a live loading based on HS-20 highway loading.

Three units per truck were delivered to the site, with a crane used to lift the units and place them in the adjacent lower ground. An excavator was used to transport units installed further out on the site. The site was covered with sod to meet the soccer-field requirements and provide quicker establishment.

One anticipated challenge during construction was how to deal with rain and groundwater, such as when water accumulated at the bottom of the excavated area after a rainstorm. The contractor diverted the water to ditches around the perimeter to keep the working area dry. A sump pump processed the water and pumped it back out onto a pond.

As stormwater comes down, the first flush goes into the existing surface pond built as an old Works Progress Administration (WPA) project in the 1930s or 1940s, notes Barron. As part of Phase 2, a diversion structure with a weir is being constructed, which will bring the system online.

“That’s designed for heavier rain events where water is coming down and the system goes over a certain level,” adds Barron. “Then it’s diverted. There’s still some water going into the pond, but the vast majority is going to the underground detention.”

A 6 x 4 box culvert swings around between two pieces of playground equipment on the west side and marries up to the StormTrap system.

“We ended up putting a collar around it so it would be able to marry up properly,” says Barron. “It’s not required. All StormTrap design drawings were very specific about how to build this. It was an example of one of the things we had to do to make this ‘site specific.’”

The stormwater enters the box culvert, travels through the underground system and then leaves through a 36-inch diameter RCP outlet on the east side that connects into the storm drain system in the street.

It was helpful to have multiple public meetings in advance of the project to inform the neighbors, notes Barron. There was ongoing coordination with the parks and recreation department, which is responsible for park maintenance.

“It was a really successful project for us for several reasons,” says Barron. “We procured the material before the contractor award so we could keep this project on schedule. As a city, we needed to bid this work, but we were able to obtain the StormTrap product as a kind of emergency situation. We needed to get this project done in the summer.

“We are lucky we have several pre-casters here in the Dallas/Fort Worth area that work with StormTrap and were able to store that material for us as well,” she adds. “As they were manufacturing it, it would just stay in their yard, and the trucks would bring it from the yard and drop it off.”

The project also included a new irrigation system and light poles. Crews worked around the large, mature trees, including the city’s oldest tree at 150 years old.

StormTrap provides a maintenance plan every two years that will be instituted when the system goes online. Barron anticipates that after a major storm event, the city will need to inspect the system. The maintenance is done in confined space, accessed through metal manhole covers.

One maintenance concern was dealing with accumulated sediment and debris that could get inside the system. The first flush of the incoming storm drain bypasses the system, preventing more sediment and debris from making its way into the system, notes Dallagasperina. His company consulted with other municipalities and design engineers using a similar-sized system and confirmed the system requires little maintenance through time.

“This system supposedly operates almost as a self-cleaning facility,” notes Dallagasperina. “The inflows push sediment and debris out of the downstream end and eventually through the outlet pipe.”

“The access points are covered over with grass, but with GPS, we know where they are to access and inspect the system,” Barron points out. “We’re able to bring in a vacuum truck if we need to.”

“The installation went swimmingly,” adds Barron. “StormTrap was onsite multiple times throughout the installation process to make sure the contractor knew what they were doing, and my inspectors were comfortable with everything.”