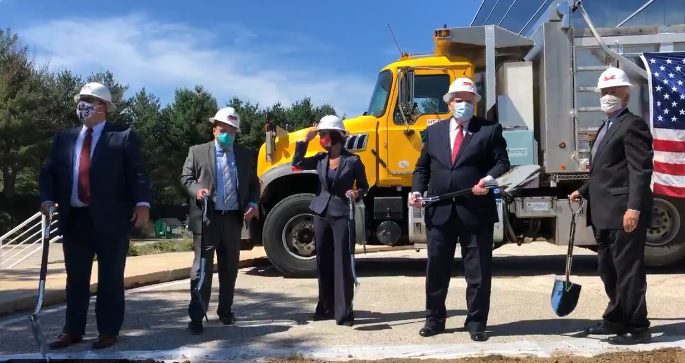 The new PennDOT District 6 RTMC will expand the existing RTMC’s capabilities by providing a larger and more modern facility for the management of PennDOT’s Intelligent Transportation Systems (ITS).

“The five-county Philadelphia Region has more than half of the state’s ITS, which shows how important this project is to our regional traffic management efforts,” said PennDOT Secretary Yassmin Gramian. “This larger, more modern facility will expand our capabilities for managing safety and traffic flow.”

“The new RTMC will be the technical and institutional hub to bring together the various regional jurisdictions, multimodal transportation interests, and service providers to focus on the common goal of optimizing the performance of our area’s transportation networks,” said PennDOT District 6 Executive Kenneth McClain.

The first PennDOT 6 Traffic Management Center (TMC) opened in St. Davids, Delaware County in October 1993. The TMC began by operating a network of 12 closed circuit television (CCTV) cameras and four dynamic message signs (DMS) using leased communication lines. In January 2000, the TMC moved to its current location in King of Prussia, Montgomery County, and began operating Expressway Service Patrols, which currently helps over 16,000 motorists a year. In 2005, the TMC expanded its operations and was upgraded to the first RTMC in Pennsylvania and began operating 24 hours a day, seven days a week. Currently, the RTMC operates over 50 percent of PennDOT’s ITS devices, including 437 Closed Circuit TV cameras, 195 Dynamic Message Signs, over 700 sensors/readers for travel time and incident detection, and over 700 miles of fiber.

PennDOT anticipates that the number of field devices will double due to increased investments in advanced technology, including connected and autonomous vehicle strategies. PennDOT will also work with various municipalities to move toward owning and operating traffic signals, known as the Green Light-Go traffic signal initiative aimed at improving safety and traffic flow.

“These added responsibilities will require additional staff and facility support,” said Secretary Gramian. “This groundbreaking puts us another step closer to improving traffic flow and being an even better partner to our emergency response agencies.”

The new center’s proposed digital video wall architecture will increase the capacity of video feeds, and seamlessly display both data and video to provide situational awareness necessary for improved response time and decision-making. Video sharing and incident coordination with other stakeholders, partner agencies and the public will be greatly improved with the new ability to transcode more video, at higher speed and quality than the current system. The new data network will be more robust and offer a much greater throughput, which will facilitate more efficient collection and dissemination of traffic incident data to the public and partner agencies.

In addition to improving its operation, PennDOT is also dedicated to enhancing the new facility’s efficiency and aims to achieve Silver status in Leadership in Energy and Environmental Design throughout the design and construction process.

Physical construction will begin with the contractor excavating the site and putting in the foundations for the new parking structure. The entire project is expected to take approximately two years to complete.

Motorists can check conditions on more than 40,000 roadway miles by visiting www.511PA.com or downloading the 511PA application for iPhone and Android devices. 511PA, which is free and available 24 hours a day, provides traffic delay warnings, weather forecasts, traffic speed information, and access to more than 1,000 traffic cameras.