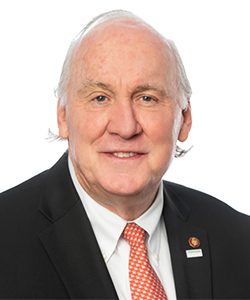 Washington, DC—Robert M. Calvani, FAIA, NCARB, of Albuquerque, New Mexico, was inaugurated as the president of the National Council of Architectural Registration Boards (NCARB) at its 2020 Annual Business Meeting. As president, Calvani will lead the organization that supports the 55 U.S. architectural licensing boards in their mission to protect the public health, safety, and welfare.

“I am honored by the trust placed in me to lead the Council this year,” said Calvani. “NCARB has built up great momentum in the past several years, and I look forward to continuing our efforts to be agile, embrace new approaches, and raise awareness of our important work to protect the public.”

During his term as president, Calvani will focus on exploring issues related to regulating incidental architecture practice, architects’ responsible charge when signing and sealing documents, and ethics in the profession. In addition, Calvani plans to expand efforts to communicate the work of NCARB and state licensing boards and improve diversity and representation within the profession.

Calvani was first appointed to the New Mexico Board of Examiners for Architects in 2003, and served terms as secretary, vice chair, and chair. During his time on the board, he volunteered for several state committees, including the Rules & Regulations Committee and Enforcement Subcommittee. Soon after his appointment to the New Mexico Board, Calvani volunteered for several NCARB subcommittees related to the Architect Registration Examination® (ARE®), later becoming chair of the Examination Committee. Since then, he has offered his time and expertise to numerous NCARB efforts including the development of the newest version of the exam, ARE 5.0, while on the Test Specification Task Force. He has also been a valuable member of NCARB’s Audit, Experience, Experience Advisory, Practice Analysis Steering, Procedures and Documents, and Regional Leadership committees, as well as the Model Law Task Force.

In 2012, Calvani’s peers elected him as the chair of NCARB’s Region 6. He then joined the NCARB Board of Directors as the Region 6 director in 2015, going on to serve terms as secretary, treasurer, second vice president, and first vice president.

Calvani is the founder and president of NCA Architects and is actively involved in his local community, devoting his time to numerous advisory boards. Calvani is also an active member of the American Institute of Architects (AIA), and in 2018, he was elevated to the AIA College of Fellows.

The National Council of Architectural Registration Boards’ membership is made up of the architectural licensing boards of the 50 states, the District of Columbia, Guam, the Northern Mariana Islands, Puerto Rico, and the U.S. Virgin Islands. NCARB, in collaboration with these boards, facilitates the licensure and credentialing of architects to protect the health, safety, and welfare of the public.

To achieve these goals, NCARB works with its Member Boards and volunteers to develop and facilitate standards for licensure, including the national examination and experience program. NCARB also recommends regulatory guidelines for licensing boards and helps architects expand their professional reach through the NCARB Certificate.