/ Bridges / Bridging the Gap Between Inspections and Decisions

Bridging the Gap Between Inspections and Decisions 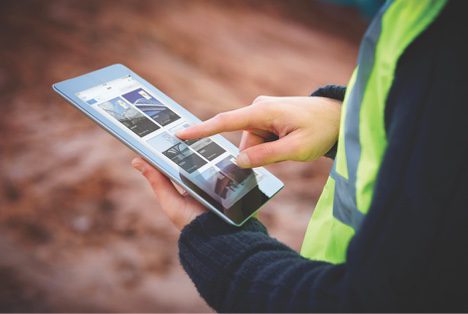 Bridge safety hasn’t always been top of mind for legislators in the United States. The impetus for creating standards and collecting information on how structurally sound the bridges in this country was the collapse of the Silver Bridge in 1967, which spanned the Ohio River between Point Pleasant, WV, and Kanauga, Ohio. The tragedy claimed the lives of 46 people and caused the federal government to quickly mandate regular bridge inspections through the National Bridge Inspection Standards (NBIS) and to create the National Bridge Inventory (NBI), which serves as a central database for basic bridge information.

The NBIS and NBI initially covered only the National Highway System but have since been expanded to include all bridges over 20 feet in length on public roadways. The NBI now includes over 600,000 structures, and details of the information collected have grown to include more data and additional types of inspections such as Scour Inspections. This expansion of scope has primarily been reactive, stemming from major incidents or bridge failures that have resulted in new mandates and requirements. 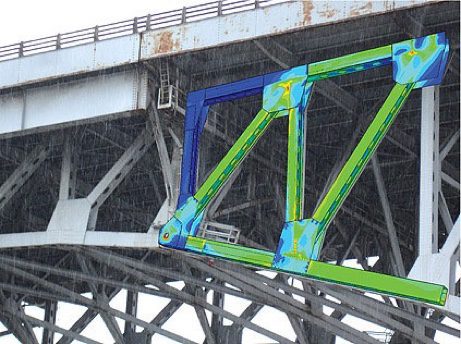 The creation of the NBIS was a significant step in establishing a minimum standard for all state and locally owned structures. Over time, a detailed set of information was collected on bridges, enabling state departments of transportations (DOTs) to become immediately aware of potential problems. This process has dramatically reduced the risk of catastrophic bridge failures in the United States. Practitioners quickly realized that the collected data could not only identify bridges in imminent failure, but also could be used in a more proactive, systematic planning process to reduce bridge management costs.

In response, the Federal Highway Administration (FHWA) helped fund the research and development of Pontis for advanced bridge management in the early 1990s. As Pontis evolved and expanded into a premier decision support and planning system, the American Association of State Highway and Transportation Officials (AASHTO) took over the research efforts and turned Pontis into an AASHTO-supported product for DOT usage as part of its AASHTOWare software program. AASHTO quickly recognized that, although the NBI satisfied its purpose of creating a database of basic bridge inventory and condition information, it did not contain sufficient condition information for deterioration modelling, maintenance planning, and overall budgeting needs that form the basis of an asset management system. As a result, AASHTO developed Commonly Recognized Elements (CoRE) as a new mechanism for collecting and recording quantitative condition information. This new process allowed bridges to be divided into their primary elements and for each element to have detailed, quantitative data collected as a representation of a more complete view of the condition of a bridge.

For the past 20 years many DOTs have collected CoRE element data and implemented the Pontis Bridge Management System. Throughout this process a task force of DOT and FHWA representatives, along with private contractors, has continued to expand the Pontis system. After researching and evaluating the successes and lessons learned over the past two decades, the task force developed a detailed proposal to revise the CoRE elements. This proposal called for the restructuring of the elements, allowing them to support the next generation of bridge management. AASHTO and FHWA adopted this effort and, beginning in April 2015, the annual submission to update the NBI will include the new AASHTO/FHWA National Bridge Elements (NBEs). In conjunction with these and other major improvements and AASHTOWare initiatives, AASHTO renamed the Pontis software AASHTOWare Bridge Management (BrM) in 2013.

AASHTOWare BrM is licensed to 44 DOTs and covers the vast majority of bridges in the United States. The BrM software provides a powerful analytical and decision support system that enables states to make the best use of their limited funding. The poor overall condition of U.S. bridges and infrastructure has been well documented by recent reports. The reality is that funding needed to replace and rehabilitate bridges and other key assets is astronomical and will need to be phased over time. However, AASHTOWare Bridge Management provides a start in that it will enable a systematic approach to develop preservation and capital replacement programs designed to prioritize and efficiently allocate limited resources based on an agency’s goals. BrM provides a critical tool to bridge owners to help them become good stewards of public money while ensuring the best possible bridge network structure. 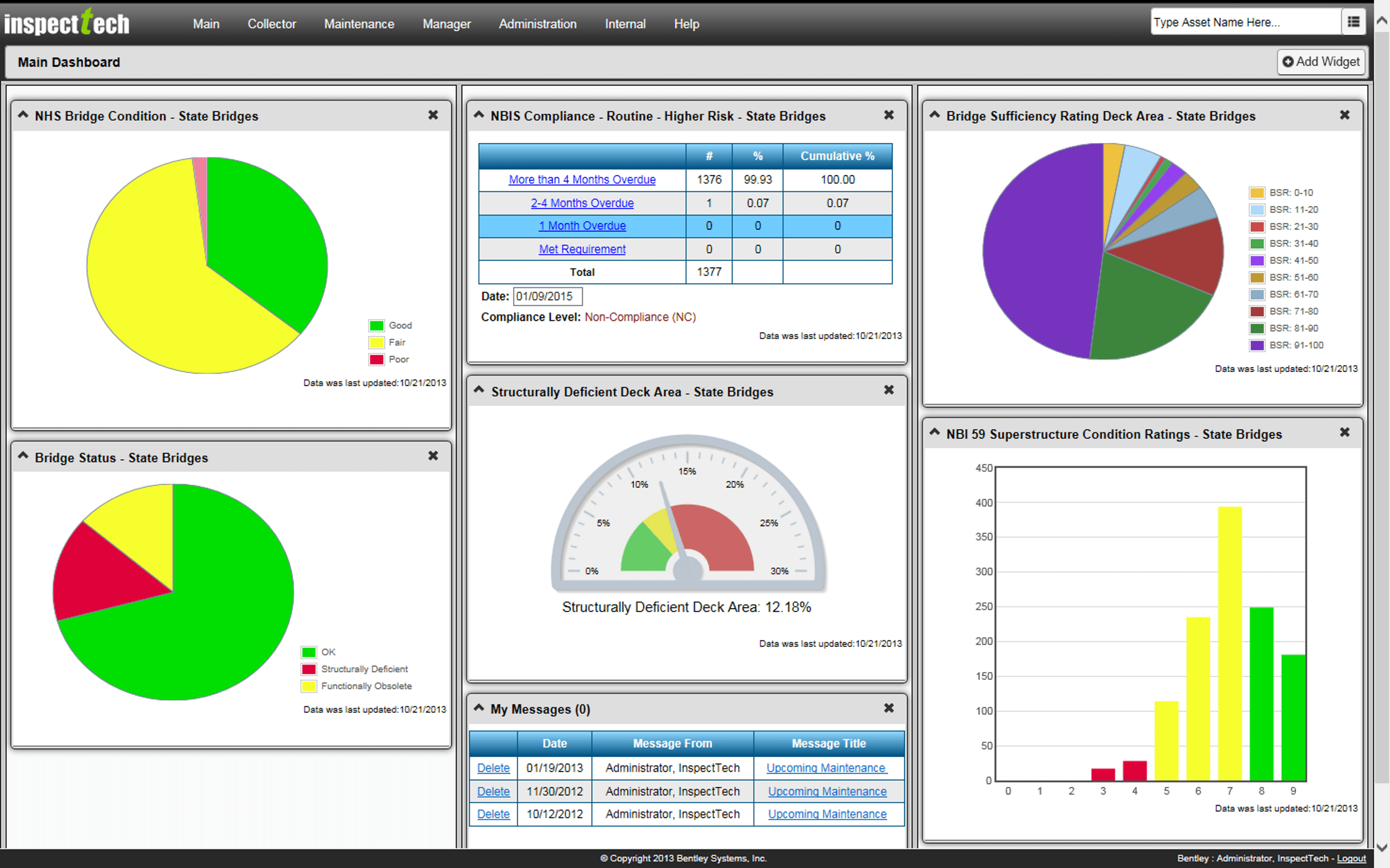 New data collection techniques continue to increase the effectiveness of asset management tools like InspectTech and AASHTOWare Bridge Management and make it easier for infrastructure owners to make critical decisions.

Through the process of evaluating and validating recommended actions, many DOTs have realized that the quality of their decisions can vary greatly based on the accuracy of the data in their systems. The primary source of this data is biennial bridge inspections that are mandated as part of the NBIS and NBI. These inspections are typically in-depth, visual inspections that can generate significant amounts of data including pictures, sketches, narrative comments, and measurements of all kinds. As part of these inspections NBI and element data are also collected. An inspection report on a “typical” four-span concrete interstate overpass can easily exceed 30 pages in length and cost several thousand dollars to produce. Inspection reports have continually grown in length and complexity as new requirements at the state and federal levels have emerged. With each passing year, new data is required, including gusset plate data, scour information, and even documenting the presence of endangered species.

The amount and depth of information that bridge inspectors are required to collect can be overwhelming and, at times, confusing. This data is often collected in a variety of formats, including paper, custom Excel spreadsheets, Word documents, and marked up sketches. Additionally, DOTs have struggled with rapidly growing inspection expenses, massive new QA/QC requirements, and data overload as files come pouring in. Unfortunately, the data has often failed to produce the necessary information. It actually can create a paralysis of trying (and often failing) to find all of the disparate bits of data before making decisions. 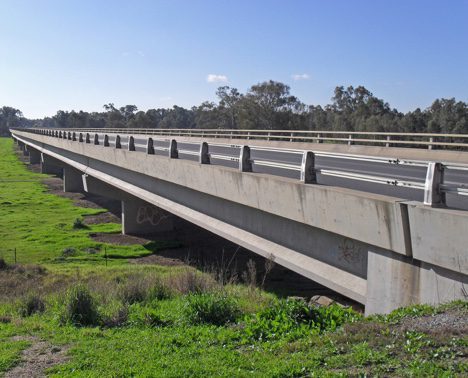 With inspection data being collected on over 600,000 bridges currently in the National Bridge Inventory bridge owners have an immense amount of data at their fingertips. Only the proper bridge management tools can transform this data into useful information.

Fortunately, technology has enabled new solutions to be developed that provide tools for inspectors, reviewers, and bridge managers and make it possible to create an integrated inspection and asset management system. Bridge designers and inspectors have come to realize that traditional paper, cluttered, and bespoke solutions can create more challenges. One technology that has come to the forefront is InspectTech software. For the past 12 years, a dedicated team has been working closely with users across the U.S. and around the world developing software that streamlines the infrastructure inspection and management process. Two years ago, InspectTech became an integral part of Bentley Systems’ portfolio of software for sustaining infrastructure and is now able to link data across all aspects of the asset lifecycle.

The Bentley InspectTech software enables the inspection, review, and decision process for entities of all types, from consultant inspectors, cities and counties, transit agencies and railroads to federal agencies and state DOTs. InspectTech recently celebrated a significant milestone as it is now licensed by 14 DOTs in the United States, covering more than 200,000 (one-third) of the nation’s bridges. Used in conjunction with AASHTOWare BrM, InspectTech offers powerful end-to-end inspection for bridge information management.

Some DOTs are using InspectTech to conduct all of their bridge inspections, and mobile versions of InspectTech are available for field work. Inspectors enter information virtually, capture pictures and GPS locations, and access historical bridge data. This allows inspectors to quickly identify problem areas on a bridge and complete their inspections more quickly and efficiently. Built-in error checks and the menu system help guide inspectors through the numerous forms and processes that are required.

The use of mobile devices has proven to dramatically streamline the inspection process and reduce the risk of error. Once data is uploaded to the server, managers are instantly notified, and they can then complete a fully electronic review of the data. Automatic error checks and validation assists the reviewer to ensure all required data has been collected.

The most recent release of this software, InspectTech version 7.4, provides users with more options. With a new Web-based dynamic inspection builder, users can make their own inspection forms for any asset type. In addition to using InspectTech for bridges, some agencies are using the software on other assets. For example, the DC Metro System (WMATA) uses InspectTech on tunnels, stations, walls, and garages, while New Jersey DOT has used the software on its more than 6,000 culverts across the Garden State.

With tools such as InspectTech, the bridge inspection and management process will continue to be streamlined. Although the current inspection process is largely based on the evolution of paper forms to digital forms, the next process will incorporate a highly visual inspection process that utilizes 3D and 4D models. The goal is to allow users to interact with a bridge information model and dynamically identify specific components and defects on the structure. Information available from the design and construction process will also be incorporated to ensure inspectors are aware of design considerations and recommended maintenance activities. Additionally, when coupled with a powerful predictive system such as BrM, the software will be able to predict the condition of the structure based on whether or not the recommended actions are followed. Lastly, these models, especially on key signature bridges, will be linked to real-time sensors and augment the visual information from inspectors.

Inspectors and owners are constantly called upon to do more with less – the mantra of government. Proven software tools such as InspectTech and AASHTOWare BrM can dramatically improve the process from the field to inspection review and detailed programmatic planning and budgeting. These software tools can also position users for fully integrated asset management throughout the asset lifecycle from design through construction and into operations and maintenance.