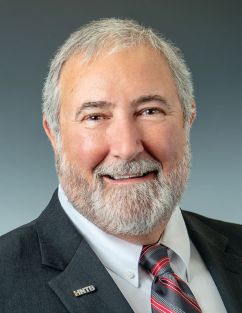 Jim Barbaresso is the HNTB national practice leader for Intelligent Transportation Systems (ITS) and emerging mobility solutions as well as a senior vice president and HNTB Fellow.

Barbaresso was fortunate to find his professional calling almost as soon as he started working. Shortly before his first day on the job in 1978 at the Road Commission for Oakland County, Mich., (in the northern suburbs of Detroit), it had passed a resolution to make safety its No. 1 priority. One of his first jobs was to analyze crash data and help identify improvement priorities to see if something could be done on the roadway to mitigate crashes.

He came up with some new ways to evaluate the crash data as well as help establish improvement and investment priorities to maximize safety. These processes then became embedded, and the Road Commission began developing a “culture of safety.”

“That initial taste of helping society by reducing crashes really was a stimulus for me to get engaged in this and make it a career focus,” recalls Barbaresso. “It just felt good to help save lives.”

He first started in ITS back in the late 1980s, and the technology has come a long way since then. At that time, most traffic-signal controllers were electromechanical and “pretty antiquated.” During the following computer age, the Road Commission began applying computing technology to improve traffic-signal control as well as using communications and sensors to collect data to improve operations and safety.

“There was a tipping point, back in the 1990 to 1995 timeframe, where ITS really took off,” notes Barbaresso. “Now we’re looking more at system performance and data-driven decisions and how vehicles interact with the infrastructure through different connectivity solutions: vehicle automation, electrification, new transit and freight solutions, and even new modes of travel.”

The goals at the time were to reduce crashes and manage congestion as well as improve the environment and provide greater accessibility to opportunities for different populations such as those who are transportation-disadvantaged. His favorite ITS technologies are connected and automated vehicles.

“When I looked at the opportunities presented by connected and automated vehicles, even as far back as three decades ago, I always felt it was a huge opportunity to maximize safety—a huge focus for me—and improve traffic flow.”

Barbaresso achieved some early notoriety at the Road Commission after finding a crash pattern at traffic signals during late-night hours. He discovered that the signals switched from full-cycle operation—where they operate in normal mode with red, yellow and green signals—to a flashing operation at late-night hours, which seemed to coincide with an unusually high number right-angle collisions at many of these intersections.

At his request, the Commission initiated a “before and after” study in which some of these intersections maintained full-cycle operation all day and night.

“We discovered a tremendous decrease in crashes at those intersections during those nighttime hours,” says Barbaresso. “But we had to dissect the data. We had to analyze it. Then we had to come up with a policy and a procedure that would be implemented county-wide.”

The process he helped create was written up for the Institute of Transportation Engineers and the Transportation Research Board at the National Academy of Sciences, and the process is still in place now after more than three decades. The recognition also earned him the nickname: “Flashing Signal Guy.”

After 41 years in the industry, Barbaresso recently was inducted into the ITS World Congress Hall of Fame due to his lengthy experience in making roads and intersections safer as well as his chairing of the 2014 ITS World Congress successfully held in Detroit. He is honored and humbled by the award, but knows he has more to pass along to the “next generation.”

“For people new to the field, I would just say work hard to make a difference in your community or in your area of expertise,” he advises. “For me, it was about saving lives. I worked with that every day when I first started out.”

For more-experienced practitioners, he hopes they all pass along the lessons they’ve learned during their careers to those who will take their place. “The goal is to make them better than you are,” he says. “Especially as older professionals with a lot of experience under our belt, our goal is to mentor and bring up the new generation and give them the skills and experience they need to make them successful.”

Now working with HNTB, Barbaresso still hopes to improve transportation and save lives. He envisions a future with automated vehicles and systems that will bring us closer to near-zero fatalities as well as improve traffic flow.

“I’m still looking forward to the day where we inch closer to that reality,” he adds. “We’re not quite there yet, but I want it for my kids and my kids’ kids.”