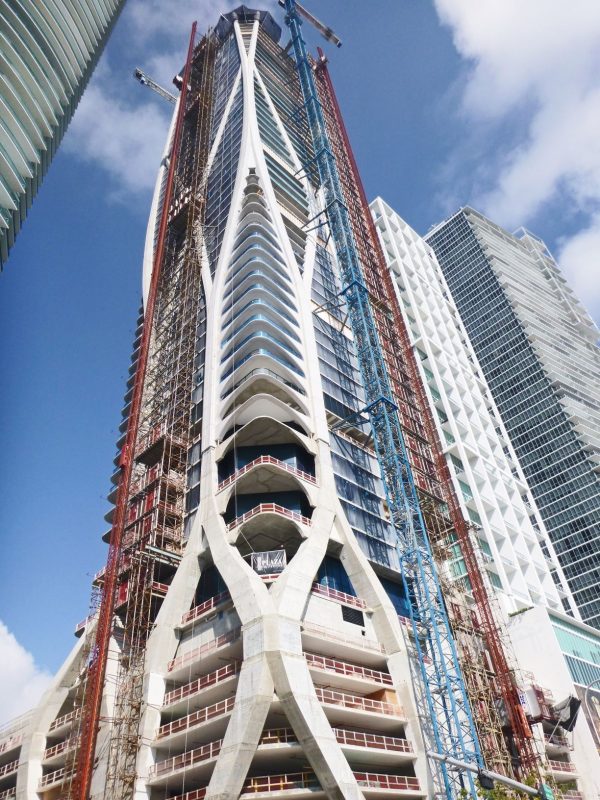 The 709-foot-tall tower incorporates a distinct, undulating façade comprised of glass fiber-reinforced concrete (GFRC) elements, which function as a structural exoskeleton to carry the tower’s gravity loads and provide lateral stiffness to withstand hurricane wind forces. The exoskeleton’s configuration incorporates cross-sections that change in shape and dimension along the height of the building, requiring meticulous project team collaboration to form and cast each component to exacting specifications.

The unique GFRC exoskeleton complicated another project goal of achieving column-free floorplans. Since the original concept of 8-inch-thick floor slabs made this approach technically unfeasible, the project team identified a compromise by using thicker slabs. The resulting design required only two interior columns, resulting in floor plans with clear core-to-glass floorplans of up to 45 feet, greatly increasing interior layout flexibility.

The project is eligible for additional honors as part of a record 203 entries this year representing engineering excellence from throughout the nation and the world. Judging for the awards program—known industry-wide as the “Academy Awards of the engineering industry”– took place in February and was conducted by a national 35-member panel of built environment leaders, along with experts from government, the media and academia. Award criteria focused on uniqueness and originality, technical innovation, social and economic value, and generating excitement for the engineering profession.

Recognition of all award winners including top winners—20 Honor Awards, 16 Grand Awards and the prestigious “Grand Conceptor Award” for the year’s most outstanding overall engineering achievement—will take place at the annual EEA Dinner and Gala, a black-tie event to be held Tuesday, April 28, 2020, at the Marriott Wardman Park Hotel in Washington, D.C.

The American Council of Engineering Companies (ACEC) is the business association of America’s engineering industry, representing more than 5,200 independent engineering firms and more than 600,000 professionals throughout the United States engaged in the development of America’s transportation, water and energy infrastructure, along with environmental, industrial and other public and private facilities. Founded in 1906 and headquartered in Washington, D.C., ACEC is a national federation of 52 state and regional organizations.