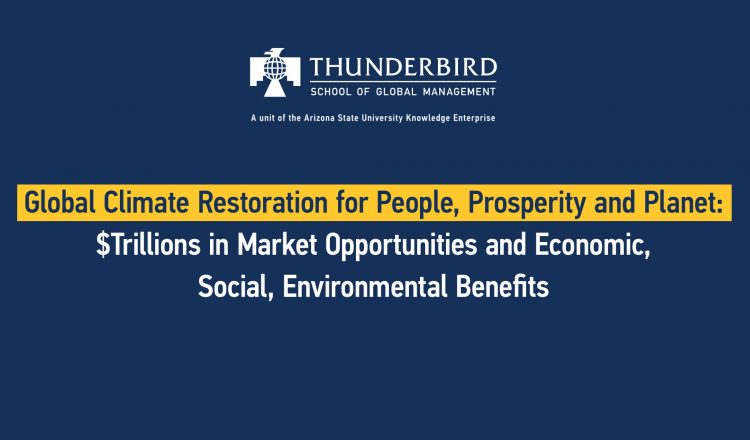 Thunderbird’s Director-General and Dean, Dr. Sanjeev Khagram authored the new report and shared it at a cross-sectoral gathering hosted by Thunderbird with the Foundation for Climate Restoration in Davos during the World Economic Forum’s annual meeting.

“Together, we must rapidly deploy natural and technological solutions to remove gigatons of carbon dioxide from our air, restore ocean ecosystems, and preserve Arctic ice, while dramatically reducing emissions and adapting to climate change impacts,” said Dr. Khagram. “Climate restoration is the critical third pillar of climate action alongside climate mitigation and adaptation.”

To catalyze and connect the mounting initiatives and reach the scale necessary for climate restoration efforts to realize their full potential, Thunderbird and The Foundation for Climate Restoration launched a new Global Climate Restoration Task Force at a high-level event at the World Economic Forum’s Annual Meeting in Davos, Switzerland, along with founding partners from the private sector, government, and civil society.

“Climate change and the devastating impacts of rising global temperatures are impossible to ignore. But I know we can not only achieve climate transformation, we can also do so in a way to advance inclusive and sustainable prosperity worldwide,” Khagram said. “That is the challenge of this new decade of action.”

Leaders in the global movement for climate restoration are demonstrating momentum including:

Climate Restoration is the global endeavor to return the Earth’s climate systems to the safe and healthy state in which humans evolved and thrived. This requires returning atmospheric CO2 to proven safe levels of less than 300 parts per million (PPM) and restoring sufficient Arctic ice to prevent permafrost melt and the resulting disastrous methane emissions.

About Thunderbird School of Global Management

About Foundation for Climate Restoration

The Foundation for Climate Restoration (F4CR) is a nonprofit whose mission is to catalyze action to restore the climate by 2050. It uses global dialogue and initiatives to unite the public, policy-makers, and technical and business experts behind the common goal of reversing global warming and restoring a healthy climate for future generations. The F4CR encourages and spotlights achievable solutions to remove excess carbon dioxide from our atmosphere and rebuild Arctic ice. For more information visit www.f4cr.org