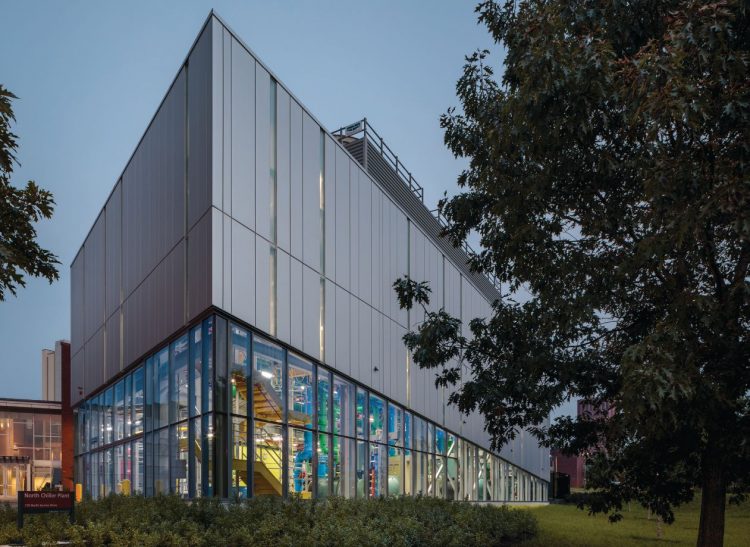 The northwest corner of the chiller plant shows rhythmical façade patterns in channel glass and metal panels above ground level.

Oxford’s “dreaming spires” (subject of the famous poem), Harvard’s Widener Library (home to one of the world’s few perfect Gutenberg Bibles), the University of Michigan’s 102-year-old Michigan Union, and Bard College’s Fisher Center for the Performing Arts (a $62 million, acoustically tuned and geothermally heated Frank Gehry masterpiece); for several centuries, major buildings at the world’s great universities have been the subject of intense architectural interest and often are key elements of a learning institution’s very identity.

But core infrastructure—the energy, sewage, heating and cooling, transportation, and water facilities that make campuses work for large populations of students, staff and administrators—traditionally haven’t been subject to the same aesthetic scrutiny. In fact, they’re often tucked away out of sight, similar to the core infrastructure of most small cities. But that’s changing, according to Jane Weinzapfel, principal at Boston’s Leers Weinzapfel Associates, Architects Inc.

“Infrastructure facilities used to be in university ‘backyards’ and not highly visible,” she explains. “But now, as campuses grow and become more densely populated with buildings, these buildings are often quite visible and part of an institution’s public face. So more and more, they have to be attractive and made with appropriate materials so they’re good neighbors with all the buildings that people notice first when they visit.”

Leers Weinzapfel recently completed a new and beautiful—and stunningly functional—10,592-square-foot chiller plant at the University of Massachusetts Amherst, just the most recent in a considerable portfolio of on-campus infrastructure facility work. It’s not even the firm’s first chiller plant; Leers Weinzapfel also designed similarly stylish plants at Ohio State and the University of Pennsylvania. But the UMass project is special nonetheless, mainly due to the large number of design goals, or constraints, it satisfied. Not only did the building have to be attractive and fit into an already densely occupied area of campus, it also had to accomplish the following:

• Work with future buildings and facilities identified in the UMass campus master plan.

• Avoid impinging on two viewsheds identified in the master plan. One of these, “the Feather,” is something of an icon on campus, as it provides welcome views of distant hills.

• Meet UMass sustainability goals for new campus facilities. “It’s hard for a plant like this to meet LEED certifications, as there just aren’t nearly as many opportunities to gain credits,” says Weinzapfel. “But even so, we found ways to make this building more efficient and are on the cusp of Gold certification.”

• The plant footprint had to accommodate a nearby transformer.

• And it was decided early in the design phase that chiller-plant operations should be highly visible to passing students. “The plant is just across a walkway from two engineering labs and part of what’s called the engineering quadrant,” explains Weinzapfel. “So we realized that students walking by this plant would be more likely than most to have a real interest in the chilling equipment and plant operations.” 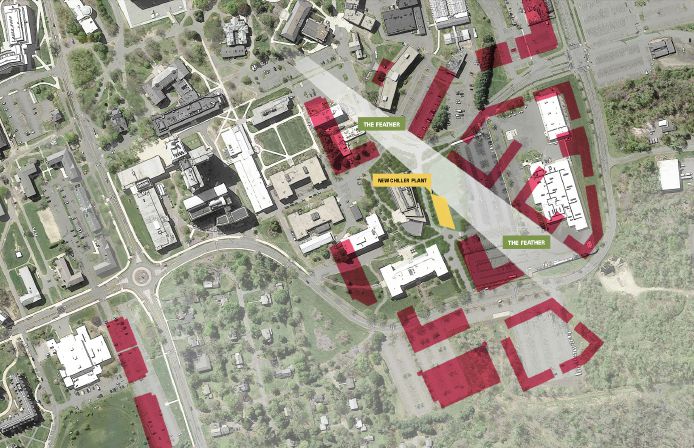 According to Leers Weinzapfel’s press release, UMass’ “new 10,592-square-foot chiller plant, a component of the university’s 2012 Campus Master Plan, is designed to increase the reliability and capacity of chilled water service throughout the growing north campus core by reimagining the existing regional plant it replaces.” In practice, that meant the new plant’s footprint was confined to a narrow space between the outmoded 1991 plant—which sat squarely in the Feather and continued to operate during construction of the new plant—and an engineering lab. This space was further confined by both viewsheds, further trimming the north edge and southwest corner.

All these factors drove the first major design innovation: the North Chiller Plant footprint would need to be a parallelogram to have sufficient floor area to house all necessary chilling equipment in the sliver of land available. This meant equipment layout was an unusually intense part of the design process, and Leers Weinzapfel used vendor-provided and “housemade” 3D models of proposed equipment within their Autodesk Revit model to verify functional layouts and perform initial clash detection. Later in the process, as subcontractors were brought in, all modeling was made available for more-intensive analysis and clash detection in more-specialized software, including Navisworks, Autodesk’s 3D model review software.

Per Leers Weinzapfel, the equipment in the new plant, specified and designed by RMF Engineering, “roughly triples the facility’s chilled and condenser water service capacity. Five water-cooled chillers are planned for the facility, with a combined capacity of 6,000 tons total. It is served by new variable-speed water pumps, water piping, valves and controls. New chilled and condenser water pumps, and new electrical distribution equipment were installed. The roof supports a new 200-ton winter cooling tower for ‘free-cooling’ mode operation as well as three field-erected cooling towers and space for one additional future cooling tower. New electrical service, plumbing lines, hot-water unit heaters, and associated piping and controls as well as a ventilation system are inherent to the building.” 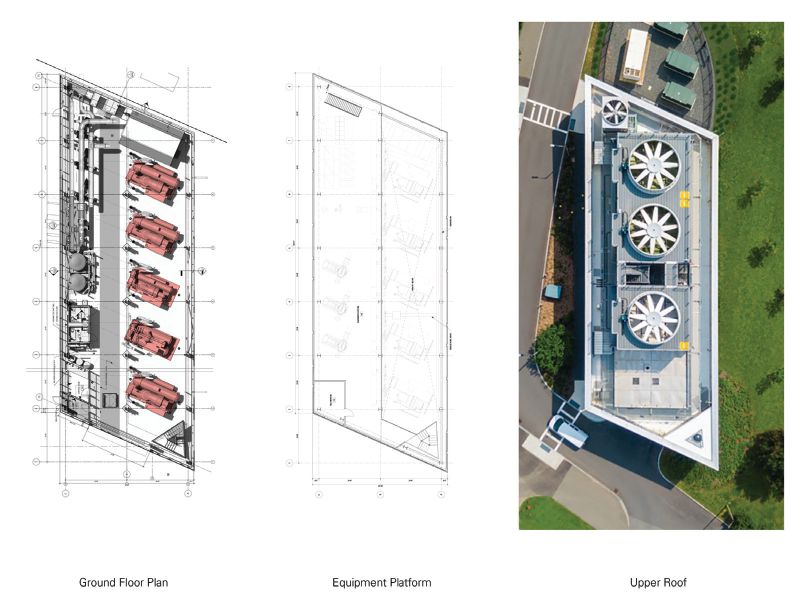 New equipment and increased capacity, by itself, goes a long way toward meeting UMass’ sustainability goals for this project. Chilled water is essential for “research-focused, process-related purposes such as cooling lasers, tempering chemical reactions and maintaining strict environmental conditions on the campus, making enhanced capacity increasingly critical as laboratory and other science buildings continue to be added to the engineering campus.” 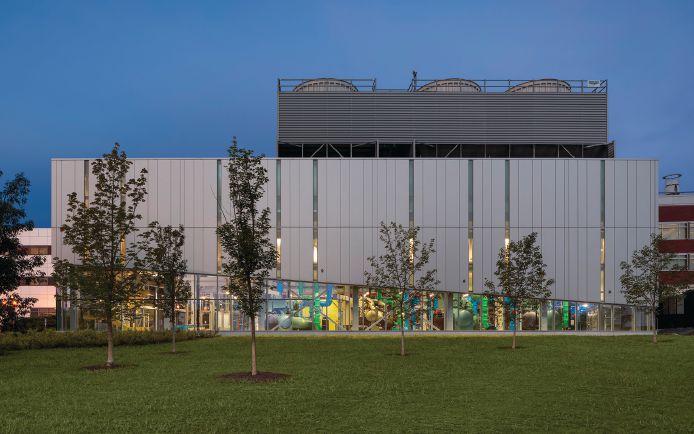 And there’s the comfort provided by cooling. Chilled water, now provided more efficiently and in greater quantities, is supplied by new lines “to the existing campus main chilled water lines. Additionally, chilled water, condenser water and heating system controls are supplied for all new and relocated HVAC systems, and are integrated into the campus building energy management system.”

Besides being functional within the limited footprint and avoiding obstruction of sightlines, the new plant’s clean diagonals offered opportunities for aesthetic enhancement. Weinzapfel took full advantage of that opportunity to give the chiller plant a sleek, appropriately industrial look that relies on matte-gray cladding, vertical strips of channel glass to provide natural light on the plant’s top floors, and large panels of clear glass that taper sculpturally on the building’s ground floor where all the actual chilling equipment is installed. 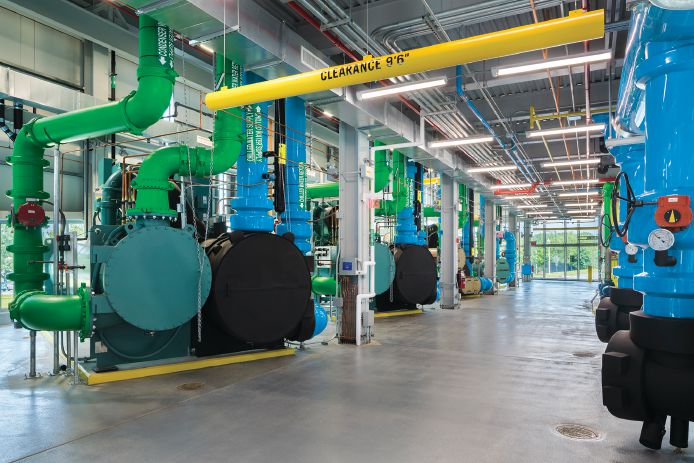 A photo shows angled chillers on the ground floor as well as a continuous interior driveway.

The tapered clear glass panels are of particular interest because they’re an innovative and functional solution that resolves several design challenges at once. Even the clarity of the glass is an important choice; in previous campus chiller plant work, Leers Weinzapfel used translucent panels to provide internal light while obscuring plant operations and giving the facilities a modern, somewhat ethereal presence. At UMass, however, campus administrators wanted plant operations to be highly visible. 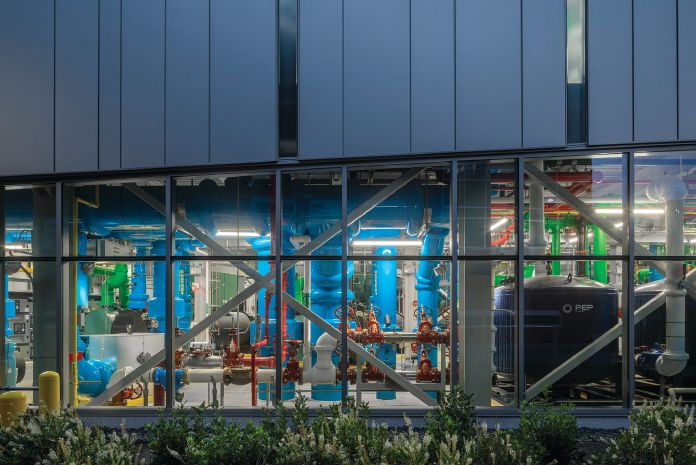 Technology is on display at the ground level.

In a UMass college newspaper article about the new plant, UMass Project Manager Ted Mendoza said, “You have this (existing) utility plant that was previously this building that you didn’t know what was happening inside of it. But since the new plant is sitting next to Engineering Lab 2, wouldn’t it be cool if it was a building you could look into? Engineering majors can slowly stare at it over time and make connections to what they’re learning about.”

For her part, Weinzapfel was happy to provide a visual learning component to the facility design and enhanced it with scrupulously color-coded equipment, piping and conduits—the look and installation of the chilling equipment received as much architectural scrutiny as the footprint and building itself.

Tapering the glass section was another key, multi-purpose design decision. “Once we made the decision to use clear glazing on the east wall to show off the interior, we also had to figure out ways to make all that glazing aesthetically pleasing and make it as efficient as possible in terms of sustainability,” explains Weinzapfel. “Tapering the panels over the length of the building really helped. It reduced the total amount of glazing while still permitting good visibility and worked well with the parallelogram footprint. The taper also allowed the glass wall to be tall enough on one end to accommodate fold-up glass vehicle doorways.”

This sort of win-win design thinking extended to the cladding: “It’s a high-performance envelope, a modular system, that worked with the corner angles on this skewed building, so it’s cost-effective,” says Weinzapfel. “But with good attention to detail, modules can look very nice, and that was the case here, especially since the system was also very good with acoustic and energy issues.”

The Leers Weinzapfel building also is a good example of finding a way to work with an existing feature that could’ve been an eyesore. The transformer yard at the building’s south end was designed around an existing transformer located where it couldn’t easily be moved and grew during construction as additional electrical equipment was placed.

“We call it a ‘utility garden,’” explains Weinzapfel. “And since UMass is a land-grant university and proud of its setting, we felt an obligation to make it part of the landscape on campus.” Land-grant universities, founded in the late 1800s by the Morrill Acts, are mandated by law to focus on agriculture and engineering in their curricula. To honor that tradition, Weinzapfel made a fenced crescent of the utility garden and surrounded it thickly with new native planting that embeds it in lush greenness, obscuring the industrial forms of the necessary electrical utilities without any tinge of embarrassment. 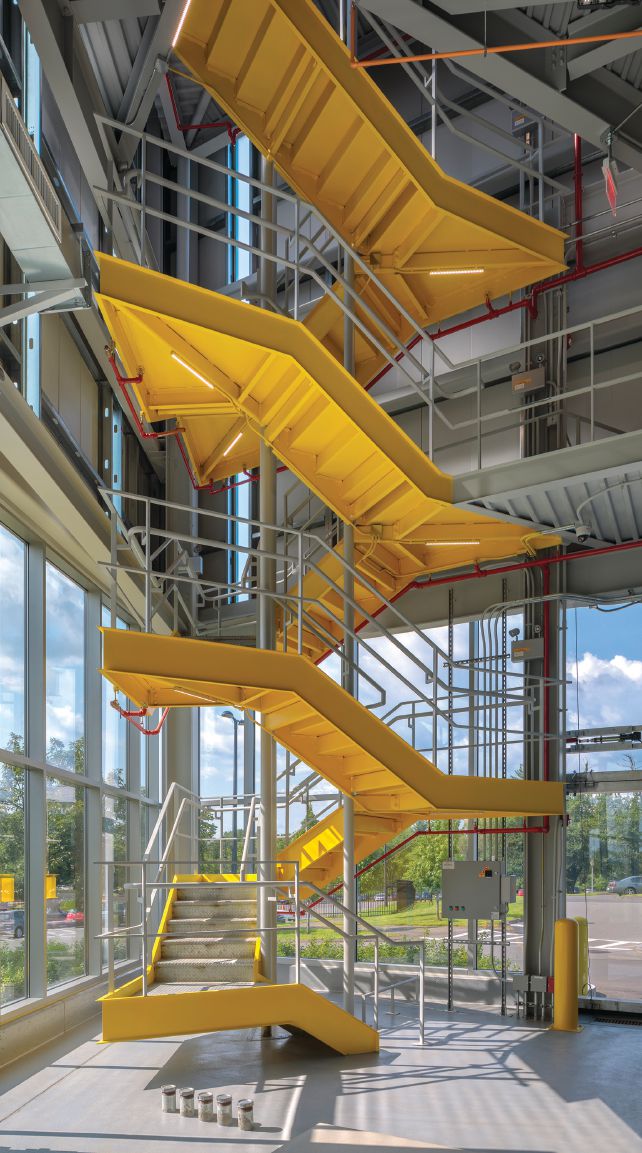 Although it may seem like the architectural talent deployed at UMass was reactive—coping with a marginal footprint, avoiding viewsheds, obscuring industrial infrastructure operations and trying to make the building fit into a difficult space without being an eyesore—nothing could be further from the truth. In fact, the new North Chiller Plant is a stunning modern gem that skillfully contrasts with traditional brick in this part of campus, complements the nearby curves of the equally modern engineering lab, and serves as something like a shadowbox for the playfully colored and presented chilling equipment. Put another way, it’s a modest masterpiece, and students and staff love it.

That this brand new and eye-catching building also meets ambitious sustainability goals outlined in UMass’ master plan—while also serving as an educational, living diorama for engineering students—it’s no wonder that the UMass website describes this infrastructure facility as “a new campus landmark, combining the university’s commitment to sustainability with an emphasis on increased student engagement.”

Even for a chiller plant, that’s pretty cool.