/ Awards / Internationally Acclaimed Architect Alejandro Aravena is the 2019 Recipient of the ULI J.C. Nichols Prize for Visionaries in Urban Development

Internationally Acclaimed Architect Alejandro Aravena is the 2019 Recipient of the ULI J.C. Nichols Prize for Visionaries in Urban Development 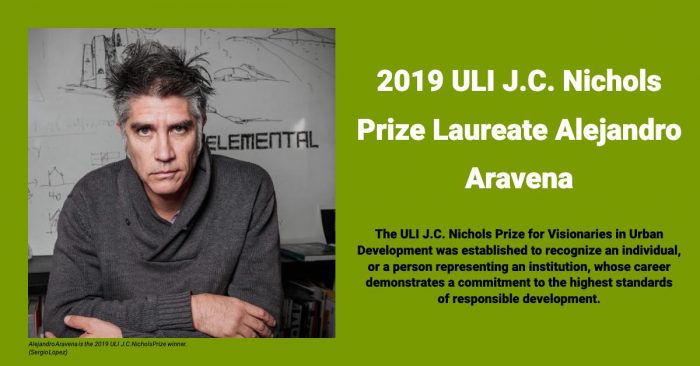 WASHINGTON – Internationally acclaimed architect Alejandro Aravena, whose rise to prominence stemmed from his ability to synthesize design challenges into solutions that channel people’s capacity to create vibrant communities, has been named the 2019 recipient of the Urban Land Institute’s (ULI) J.C. Nichols Prize for Visionaries in Urban Development.

The Nichols Prize honors the legacy of Kansas City, Missouri, developer J.C. Nichols, a founding ULI member considered to be one of America’s most creative entrepreneurs in land use during the first half of the 20th century. Aravena, a lifelong resident of Chile, is the first Latin American to be awarded the prize, which recognizes an individual who has made a distinguished contribution to community building globally, who has established visionary standards of excellence in the land use and development field, and whose commitment to creating the highest quality built environment has led to the betterment of society. He will be honored as the 20th Nichols laureate and will be a featured speaker at ULI’s 2019 Fall Meeting, which will be held September 18-21 in Washington, D.C.

Aravena, who was awarded the Pritzker Prize in 2016, is the founder of ELEMENTAL, a Santiago-based architecture firm at which he is a co-partner with Gonzalo Arteaga, Juan Cerda, Victor Oddo and Diego Torres. ELEMENTAL, which he refers to as a “Do Tank,” has designed extraordinary buildings and places around the world, including several environmentally innovative spaces at the Universidad Catolica de Chile; flexible office space in Shanghai; dormitory space at St. Edward’s University in Austin, Texas; the Jan Michalski Foundation’s writers residences in Montricher, Switzerland; the Art Mill cultural center in Doha, Qatar; and a new development at the Energias de Portugal headquarters site in Lisbon, Portugal.

Aravena and his firm are equally renowned for projects of public interest and social impact, including affordable housing, public space, infrastructure and transportation. Through this work, Aravena focuses on overcoming limited resources with synthesized designs that address major urban challenges affecting people’s quality of life. “When we create a design proposal, we factor in all the dimensions at the same time, and what we are designing addresses all the forces – economic, political, social, environmental, even aesthetical – that inform a building or place,” Aravena said.

One example of this approach is the incremental housing designed by ELEMENTAL for residents of the Chilean city of Constitucion following a devastating earthquake and tsunami in 2010. Incremental housing involves providing the basic structure of the dwelling (which Aravena refers to as “half of a good house, instead of a small one,”) leaving the remainder to be completed by residents, allowing them to customize their homes and instilling in residents a sense of pride and accomplishment. This approach, which proved highly successful in Constitucion, was deemed by ELEMENTAL to be the most cost-efficient way to quickly house thousands of people in need of a place to live. And while it was a response for residents displaced by a catastrophe, it is an approach Aravena believes could be replicated to increase the affordable housing stock in other cities.

ULI Trustee and Nichols Prize Jury Chairman Michael Spies, senior managing director of Tishman Speyer in New York City, noted that the selection of Aravena as the Nichols laureate “continues a tradition of citing people who have big, bold ideas. His approach to architecture is one of really wanting to understand who will be using a space or affected by a space, and how the space will fit within the constellation of activities around it,” Spies said. “From the start of a project, he focuses on absorbing all the dynamics, circumstances and challenges that could be affected by that physical form, so its impact will be as broadly beneficial as possible.”

ELEMENTAL’s holistic approach is one that was advocated by J.C. Nichols, who wrote in 1919, “An intelligent city plan thinks impartially for all parts of the city at the same time, and does not forget the greater needs of tomorrow in the press of today. It is simply good, practical, hard sense.” This statement still holds true 100 years later, says Aravena, noting that every aspect of his work – and his belief in the resourcefulness of people as a solution to urban challenges – is about using common sense.

“The main contribution architecture makes to the built environment is what it inspires in human behavior,” McLean said. “One of Alejandro’s greatest accomplishments is the process in which he’s connected architecture and working with communities, taking care to include people’s ideas on how to make a better environment to improve all parts of the community. He doesn’t just draw solutions, he strives (for his work) to be part of the solution.”

“The selection of Alejandro represents the notion that communities of the future require collaboration to move forward,” Woo said. “He exemplifies the importance of working across the public, private and not-for-profit sectors, different levels of government, and all layers of the community, as well as the importance of understanding the connection between the built environment and the natural environment. He represents the integrator, which (is a role) our industry very much needs.”

Aravena was the director of the Venice Architecture Biennale 2016, and a speaker at the TEDGlobal conference in Rio de Janeiro, Brazil in 2014. He served on the Pritzker Architecture Prize jury from 2009-2015. In 2010, Aravena was named an International Fellow by the Royal Institute of British Architects, and he was also named as one of the 26 creative geniuses of 2016 by the New York Times.

He has served as a board member of the Cities Program of the London School of Economics since 2011. In addition, he is a board member of the Lafarge-Holcim Foundation and a founding member of the Chilean Public Policies Society. He was one of 100 luminaries contributing to the Rio+20 Global Summit in 2012. Aravena was a professor at the Harvard Graduate School of Design in 2000 and 2005; and he also taught at Istituto Universitario di Architettura di Venezia in 2005. He has held the ELEMENTAL Copec Chair at Universidad Catolica de Chile since 2006.

The Urban Land Institute is a nonprofit education and research institute supported by its members. Its mission is to provide leadership in the responsible use of land and in creating and sustaining thriving communities worldwide. Established in 1936, the institute has more than 44,000 members worldwide representing all aspects of land use and development disciplines