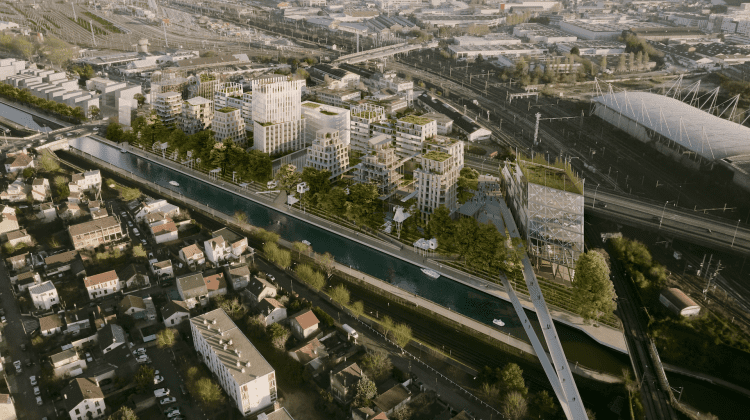 MKNO: diversity and sustainable development are combined to offer a new place to live in Bobigny

NODI, a new real estate player, develops mixed projects in housing, shops, offices with a strong territorial anchorage. NODI recreates living spaces abounding in spaces that most often have a rich industrial past and incorporate a global approach to environmental impacts. By taking root at the local, metropolitan and international level, NODI has applied for the “Reinventing Cities” call for projects, an innovative international competition led by the C40 Cities Climate Leadership Group (C40), which aims to transform urban sites in high places of sustainable development in 19 cities around the world.

Located along the Ourcq canal in Bobigny (93), the so-called “MBK” site is the first stone of the future metropolitan centrality of “La Folie”, a strategic area now lined by rail infrastructure, which aims to become a multimodal transport hub with the arrival of the TZen3, the T11 express and a future additional station of the metro line 5.

With MKNO, the multidisciplinary and international project team led by NODI and its partner PROMOVAL consisting of COLDEFY & ASSOCIATES, TRIPTYQUES ARCHITECTS – PLANNERS IUP, PILA, ZEFCO environmental study bureau and MOZ LANDSCAPE agencies – are taking advantage of a double opportunity: to give life to the banks of the Ourcq canal and to a wasteland marked by de-industrialization. More than just a real estate complex, MKNO will be offering real neighborhood life in the spring of 2024, combining quality of life, local and territorial economy, these expectations are linked to the environment and the energy transition, thus creating more than 700 jobs locally.

With MKNO, Coldefy & Associates push the boundaries of the city and the way we live 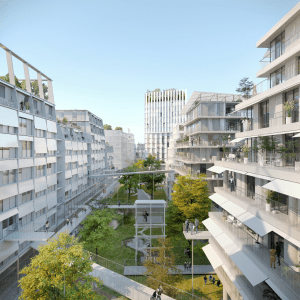 Coldefy & Associates along with MKNO creates a new environmental, urban and social balance in the heart of a project that envisions harmonizing interactions and connections in order to respect the identity of the site, all while creating new landmarks.
As a dominant aspect of the site, the water canal presented itself as an exceptional opportunity that we needed to reinforce and intensify. By multiplying routes, pathways and altitudes in order to best explore this urban fringe, made distinct by the water element, we offered the canal to the whole neighborhood. Bridges, pontoons and piers meander between the buildings, towards the canal. They functionally link certain buildings while making space for pause, experience, reflection, views and ambiance. Cabins, slides, playgrounds and kiosks pierce these pathways and encourage an animated urban space – rich, vibrant and playful. The juxtaposition of these light architectural interventions to their high intensity of use forms a unique urban unit, paying homage to the genius of the site, the pile-dwelling on the lake, the palafittecity.
Like an islet of freshness, an open ground, soil-grown rain garden allows the infiltration of the pluvial waters. The atmosphere of the vegetation is that of a light undergrowth populated with alluvial plain trees. Along the pier, it creates a thick foliage valuable for shading, freshness and movement of wildlife between the bank, the embankment and the heart of the island.
The architecture of the buildings was based on a simple grid module, corresponding to the housing and residential nature of the project and allowing a mutability of the structures. This framework makes it possible to reflect upon the economy of potential scale and expansion, a fundamental aspect for projects of this size. This reflection is necessary and constitutes a starting point in the formulation of our response to the challenges of the C40. 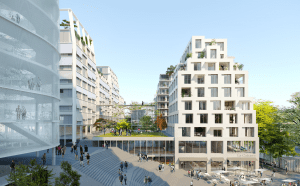 With the banks of the Ourcq canal as a support for an innovative ecosystem, the MKNO Projectreinforces the Balbynian service and recreation network. With a total surface area of approximately 50,000 m2 of floor space (in accordance with the competition rules), the MKNO Project provides formixed programming : family housing, residences for students, young actives and senior citizens, an economic center dedicated to new mobility, proximity logistics space, two hotels and offices. The IUT of Tremblay in support of the University of Paris 8 (Saint Denis) and its researchers will be able to support the companies of the territory in their developments within MKNO and will answer to the stakes of education by setting up the business campus.

A set of culinary laboratories will also be created to meet the strong demand of the metropolitan culinary market. To animate and facilitate the daily life of the inhabitants, the future neighborhood will also include local shops, Sohos (often small individual businesses and home-based activities), a nursery, a media library and a neighborhood captaincy. The culmination of this ambitious project, La Cabane – a foodcourt-incubator of young chefs will extend along the canal in a spirit of guinguette.

Innovation and entrepreneurship are indeed at the heart of the project embodied by the MKNO Cluster, a tertiary cluster developed around the theme of new mobility: the Lille incubator EuraTechnologies, one of the largest European incubators, will install in particular its first accelerator out of the region of Hauts de France. The strength of MKNO is therefore to value the opportunity to respond in an inclusive way to the social and economic issues that characterize the Balbynian territory.

A low carbon and resilient neighborhood

The inscription of the project in the urban and landscape environment of the canal also guided the reflection led by NODI and PROMOVAL, in partnership with an international team of architects made up of the agencies COLDEFY & ASSOCIATES, TRIPTYQUES ARCHITECTS – PLANNERS IUP and PILA and the ZEFCO environmental study bureau.

By reducing carbon emissions by 22%* over its entire life cycle, the MKNO operation meets the strong environmental ambition of Reinventing Cities. For this, the project is based both on a massive use of biobased materials and reuse in buildings in wood structure (not less than 25,000 m3 of wood and 7,600 m2 of reused materials will be required for its construction), over 50% of renewable energy and recovery and a complete soft mobility offer (more than 1000 bicycle parking spaces).

The Marin d’Eau Douce, already present on the Canal de l’Ourcq at the Villette, will manage on-site a river stop allowing curious people to join the Foodcourt La Cabane in electric river shuttles. A fleet of bicycles made available to local residents will help strengthen the neighborhood’s connection to its environment. Finally, to achieve carbon neutrality, buildings will incorporate a reversible design increasing their life.

By recreating 5,000 m2 of vegetated surfaces including 3,000 m2 of land MKNO not only strengthens its resilience to climate change, but offers its inhabitants and users real comfort in everyday life through natural stormwater management and a true freshness spot in town.

These environmental biases are complemented by the Project Team’s commitment to the economic and social aspects in order to provide a truly sustainable response to the territory.

*Compared to a “classic” real estate project, according to ZEFCO methodology.

In addition to a strong environmental requirement, the MKNO Project proposes an innovative approach of management and animation of the collective spaces with the Capitainerie, a neighborhood house managed by a Cooperative Society of collective interest (SCIC) impelled by NODI to which will adhere to neighborhood stakeholders as well as communities.

The slope and the alignments of trees along the canal are strong visual markers of the site and will be preserved the surroundings requalified and widened. Totally pedestrian, the pier offered to residents will strengthen the mesh of public spaces along the canal. Thanks to these, the MKNO site will be animated at any time, at any season, and will be open to all audiences.

Comments are disabled
NEXT ARTICLE
CFSEI Announces Program for 2019 Expo
May 8, 2019
PREVIOUS ARTICLE
Wood Adopts Delair UX11 for Large Scale Mine Surveying and Quantity Measuring
May 8, 2019