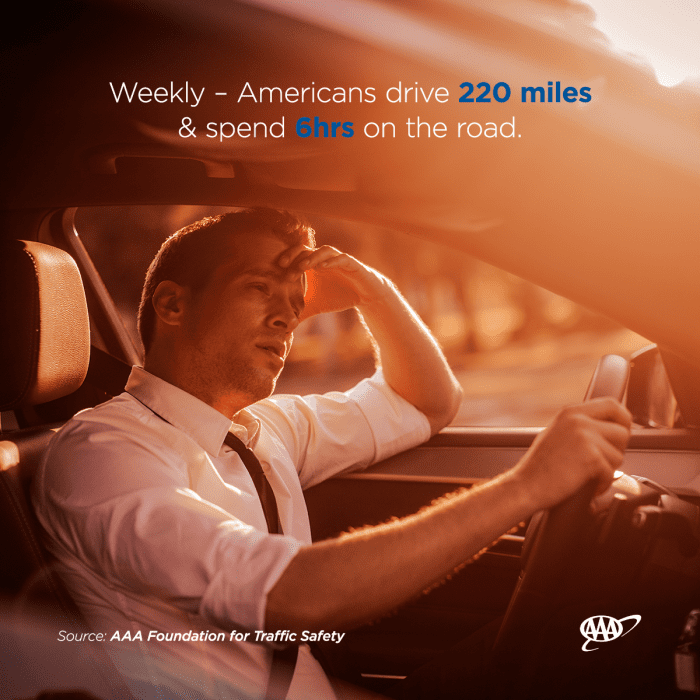 DENVER (March 5, 2019)  – If you think you’ve been spending more time in your car lately, you’re right: Each week, Americans spend 20 more minutes driving than they did in 2014. That’s the takeaway from new research from the AAA Foundation for Traffic Safety, which found that Americans collectively spend 70 billion hours behind the wheel each year – an eight percent bump over 2014. The average driver travels more than 220 miles each week, or 11,498 miles each year. That’s the equivalent of two roundtrip drives from San Francisco to Washington, D.C.

“There are more ways to get around than there have ever been, from ridesharing to dockless bicycles to mass transit and beyond. But the car remains king,” said AAA Colorado spokesman Skyler McKinley. “And as we spend more and more time behind the wheel, safety issues such as fatigue, distraction, and impatience all increase the likelihood of a crash. Stay alert, stay focused, and focus on driving, and only driving, whenever you’re driving. It’ll save your life.”

The AAA Foundation’s American Driving Survey shows that on average, U.S. drivers spend nearly an hour behind the wheel each day and travel 31.5 miles – a five percent increase from 2014.

Driving Trips per Day
Drivers made an average of 2.22 daily driving trips in 2016-2017, up three percent from 2014-2015. Middle-aged drivers take more take more trips per day than teen or older drivers, as do women compared to men and non-Hispanic whites than for other races. And the average number of daily trips in 2016-2017 increased as the participants’ education level increased.

Time Spent Driving
Drivers spent an average of 51 minutes behind the wheel in 2016-2017, up more than six percent over 2014-2015. Middle-aged drivers spent more time driving than teen or older drivers, as did men more than women, and non-Hispanic whites over other races. Drivers who were married or living with a partner spent the most time driving on a daily basis from 2014-2015 and 2016-2017.

Miles Driven
Participants drove an average of 31.5 miles per day in 2016-2017, up five percent from 2014-2015. Middle-aged drivers drove more miles than teen or older drivers, as did men more than women, and non-Hispanic whites compared to other races. As expected, drivers living in the country drove more miles than those living in a town or city in both 2014-2015 and 2016-2017.

Methodology
Survey data are from a representative sample of 11,804 drivers who provided information about their driving on randomly selected days between January 1, 2014 and December 31, 2017.

About the AAA Foundation for Traffic Safety

Established in 1947 by AAA, the AAA Foundation for Traffic Safety is a nonprofit, publicly funded, 501(c)(3) charitable research and educational organization. The AAA Foundation’s mission is to prevent traffic deaths and injuries by conducting research into their causes and by educating the public about strategies to prevent crashes and reduce injuries when they do occur. This research is used to develop educational materials for drivers, pedestrians, bicyclists and other road users.

More than 685,000 members strong, AAA Colorado is the state’s most-trusted advocate for the safety and security of all travelers. As North America’s largest motoring and leisure travel organization, AAA provides more than 59 million members with travel, insurance, financial, and automotive-related services – as well as member-exclusive savings. For more information, visit AAA.com