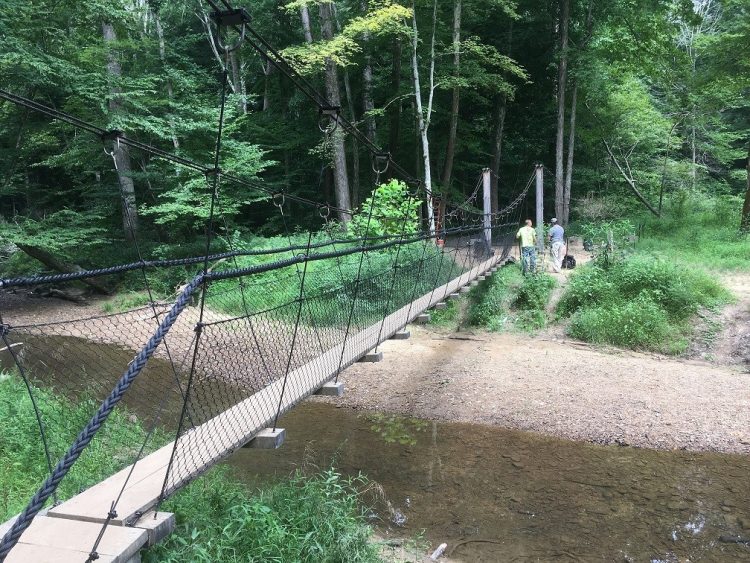 MASON, Ohio — Woolpert and the Ohio Department of Natural Resources (ODNR) were honored Thursday night in Mason with the 2018 Outstanding Special Purpose Bridge Award from the Association for Bridge Construction and Design (ABCD) for the Hemlock Pedestrian Bridge. The suspension bridge, located in Hocking Hills State Park about 60 miles southeast of Columbus, was modeled after a bridge featured in the movie “Indiana Jones and the Temple of Doom.”

Unlike the bridge in the movie, which was hundreds of feet long and suspended hundreds of feet above an alligator-filled river, the Hemlock Pedestrian Bridge was constructed 10 feet above the bottom of a stream, has a suspension length of 100 feet and a walkway length of 64 feet. The bridge is designed in a “V” configuration with a 42-inch width at the handrail, but only a 16-inch-wide walking path.

“We wanted to have a swinging bridge that would move as you walked across it, with flex and bounce, much like the one in the movie,” said Woolpert Team Leader Tom Less, PE, the project’s lead designer and engineer. “It’s fun and different, but very safe.”

“This bridge was designed to be an adventure for park visitors and is designed to swing out of the way during flooding events,” Smithhisler said. “Consequently, it moves considerably while traversing.”

Woolpert designers were cognizant of constructability, since the location of the bridge prohibits the use of heavy equipment. Less said all the materials used to build the bridge had to be packed on someone’s back to get to the site.

“The bridge ended up being constructed by ODNR crews,” Less said. “The elements and challenges specific to the state park were such that we felt they would be the best choice. The ODNR is very familiar with what’s needed in the park and what’s restricted.”

Less said he felt the bridge was honored by ABCD because it is out of the ordinary, yet ideally suited for the location.

“The criteria for the design was as much aesthetic as it was engineering,” Less said. “It’s in the middle of a state park, so it’s made of timber and cable. We wanted the bridge itself to feel like an adventure, and that’s why we modeled it after the ‘Indiana Jones’ bridge.”

He credited Smithhisler for consistently supporting the bridge design and the engineers involved.

“A project like this that diverts from the norm takes initiative and it takes champions,” Less said. “Gus maintained his creative outlook and understood the vision when others didn’t. It wasn’t until people saw how much fun everyone was having and how many times pictures were being shared on social media that they realized its value and how well it fits with the park.”

“I did another project for the park in which we put a spiral staircase in, allowing climbers to get safely and creatively from one rock ledge to another,” Mattox said. “I think our track record is the reason we were selected for the job.”

Smithhisler thanked Mattox and Less for working with him through the design process and thanked the ODNR Division of Parks and Watercraft employees who built the structure.

“We weathered significant difficulties but completed a bridge that will be fun for park visitors for generations,” Smithhisler said. “While this project was not huge in scope or dollars, it will always be one of my most memorable accomplishments with ODNR.”

About Woolpert
Woolpert is the fastest growing architecture, engineering and geospatial (AEG) firm in the country, delivering value to clients in all 50 states and around the world by strategically blending innovative design and engineering excellence with leading-edge technology and geospatial applications. With a dynamic research and development department, Woolpert works with inventive business partners such as Google and Esri; operates a fleet of planes, sensors and unmanned aircraft systems (UAS); and continually pushes industry boundaries by working with advanced water technologies, asset management, building information modeling (BIM) and sustainable design. The firm, which is 95th among ENR’s Top 500 Design Firms, supports a mission to help its clients progress and become more progressive. For over 100 years and with 28 offices across the U.S., Woolpert serves federal, state and local governments; private and public companies and universities; energy and transportation departments; and the U.S. Armed Forces. For more information, visit woolpert.com or call 937-531-1258.