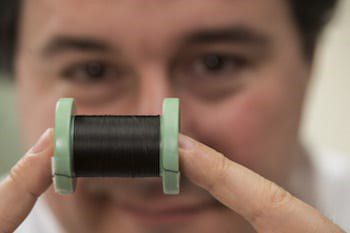 HOUSTON – Rice University chemical and biomolecular engineer Matteo Pasquali and his colleagues have won a $3.3 million federal grant to develop a method to convert natural gas into carbon nanotubes for materials that can replace metals.

The award comes from the Department of Energy’s Advanced Research Projects Agency-Energy (ARPA-E), through it’s OPEN+ initiative. OPEN+ announced seven awards in its second and third rounds of funding in December to groups advancing concrete and methane technologies.

The Rice-led team will convert methane into carbon nanotubes, spin them into fibers, and evaluate their performance and properties, with the goal of displacing metals in large-scale applications to reduce the energy consumption and carbon dioxide emissions associated with metal production. The process would also produce valuable hydrogen as a side product.

“For most of the history of civilization, we used carbon primarily as source of materials, clothing and food,” said Pasquali, Rice’s A.J. Hartsook Professor of Chemical and Biomolecular Engineering, of chemistry and of materials science and nanoengineering. “Only in the past two centuries have we moved to an economy where we burn over 95 percent of the fossil hydrocarbons to produce energy, to the point that we are changing our climate. We then use much of this energy to make inefficient materials such as steel, aluminum and copper.”

He said more than 10 percent the world’s annual energy use and carbon dioxide emissions are associated with the mining and manufacturing of metals. “With our new concept, we will convert directly natural gas into materials made of carbon nanotubes,” Pasquali said. “Based on their properties, these materials can displace metals while providing major weight savings. At the same time, we will generate hydrogen from the hydrocarbon decomposition process, and this hydrogen can be used to offset the energy costs of making the material or as valuable energy carriers for transportation.”

Pasquali noted his team will partner with Shell “for its expertise in all aspects of hydrocarbon production, conversion and processing, and because of Shell’s progressive vision for an energy future in which we use hydrocarbons responsibly and limit carbon dioxide emissions.”

He said the project will lay a foundation to understand whether and how the conversion of natural gas into carbon nanotube materials can be made into a large-volume, economical process that could displace metals and other energy-inefficient materials at the level of hundreds of megatons per year.  Such displacement would yield massive reductions in carbon dioxide emissions while also generating economic growth and adding value to our natural gas resources.

“Realizing this vision will require creating new value chains, supply chains and manufacturing chains, as is always the case when a new class of materials is introduced,” Pasquali said. “Such an effort will require decades to reach full deployment and will require partnering with multiple other organizations both at the stages of materials synthesis and conversion as well as in manufacturing and introduction into products.

“It is critical that we compress as much as possible the time scale for the development and deployment of this technology,” he said. “The climate is already changing and we must act with urgency.”

Every three years, ARPA-E issues an open call to scientists and engineers for transformational technologies across the scope of the agency’s energy mission. The agency created OPEN+ to focus on particular topics in energy where ARPA-E sees significant opportunities to “innovate and create new communities.” ARPA-E plans to announce a total of nine OPEN+ cohorts through early 2019.