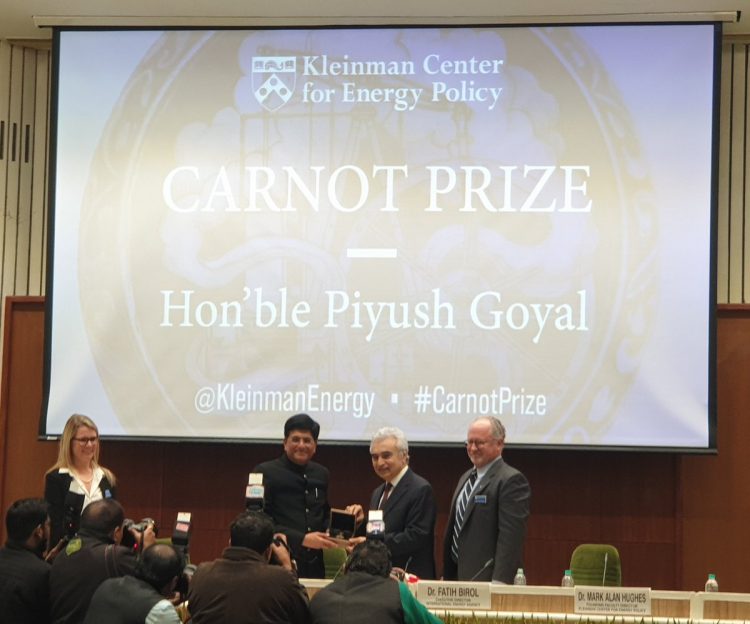 New Delhi, India —Today the Kleinman Center for Energy Policy at the University of Pennsylvania presented its fourth annual Carnot Prize for achievements in energy policy to the Honorable Piyush Goyal, India’s former minister of power and of renewables and current minister of railways and coal.

During his tenure, Goyal directed a fast-track effort to electrify 18,000 villages in remote parts of India. He was also instrumental in reforming India’s power markets and expanding renewable energy.

Goyal came to Philadelphia last October to receive the 2018 Carnot Prize. Soon after he arrived, an emergency in India pulled him home immediately. Penn students, faculty, deans, and friends still gathered that day to pay tribute to the minister. Meanwhile, the Kleinman Center made a commitment to officially present him the award in Delhi.

“Minister Goyal’s efforts demonstrate what it takes to create a just energy transition—courage amidst complexity,” said Mark Alan Hughes, founding faculty director of the Kleinman Center. “Providing power to the world’s energy poor turns on the lights—and also empowers education, sanitation, and health care. It closes the gap between the haves and have nots.”

While India has relied heavily on coal to power up the country—like China in recent years and the United States decades ago—India’s coal expansion appears to have peaked and the permanent transition to cleaner energy is underway.

“It is both a personal honor as well as a tribute to the efforts of all involved in this great work throughout India to be recognized with the Carnot Prize by the University of Pennsylvania,” said Goyal.

“We are pleased to have Penn alumni in India join Minister Goyal and his friends at this event—to recognize the minister’s courageous achievements,” said Frederick Steiner, dean and Paley Professor at the School of Design at Penn, home of the Kleinman Center.

In addition to the award ceremony, today’s event included a panel discussion on energy policy with two Carnot Prize recipients: Goyal and Birol. The panel was moderated by Hughes.

Piyush Goyal is a member of India’s upper house of parliament and serves as the minister of railways and coal. He previously oversaw power, coal, new and renewable energy, and mines.

During Goyal’s tenure, India has seen transformational changes in its power sector—including the electrification of nearly 18,000 villages in some of the most remote and inaccessible parts of the country. Goyal’s other projects include rolling out a comprehensive power sector reform plan, the world’s largest LED bulb distribution program, and the world’s largest renewable energy expansion program.

Over his 34-year political career, Goyal has held several positions in the Bharatiya Janata Party (BJP), where he served as national treasurer and also head of the party’s communications committee during India’s 2014 general elections.

Goyal studied accounting and law at Mumbai University. In additional to public service, he was an investment banker and advised top corporations on management strategy and growth. He also served on the boards of the State Bank of India— the country’s largest commercial bank—and Bank of Baroda.

His father, the late Vedprakash Goyal was India’s union minister of shipping and the BJP’s national treasurer for over two decades. His mother, Chandrakanta Goyal, was elected three times to the Maharashtra state legislative assembly.

Goyal is married to Seema, who is a social worker, and he has two children who currently live in the United States: Dhruv works in New York, and Radhika studies at Harvard.

ABOUT THE CARNOT PRIZE

The Carnot Prize is named in memory of French scientist Sadi Carnot, who in 1824 published Reflections on the Motive Power of Fire, which is now recognized as the first statement of what is now known as the second law of thermodynamics. Carnot recognized that the power of the steam engine would produce a great revolution in human development. The Carnot Prize is intended to honor those leading revolutions in energy policy to further progress and prosperity.

ABOUT THE KLEINMAN CENTER

The Kleinman Center for Energy Policy operates within the School of Design at the University of Pennsylvania. Its mission is to create the conditions for policy innovation that support a just and efficient transition to sustainable energy.

Blog Post. As we reconvene in New Delhi to officially award the Carnot Prize, we find teaching moments in India’s journey to clean energy.

Blog Post. As we reconvene in New Delhi to officially award the Carnot Prize, we explore India’s road to cleaner energy.