TCI Calls for Manufacturers to use Renewables at World Climate Summit 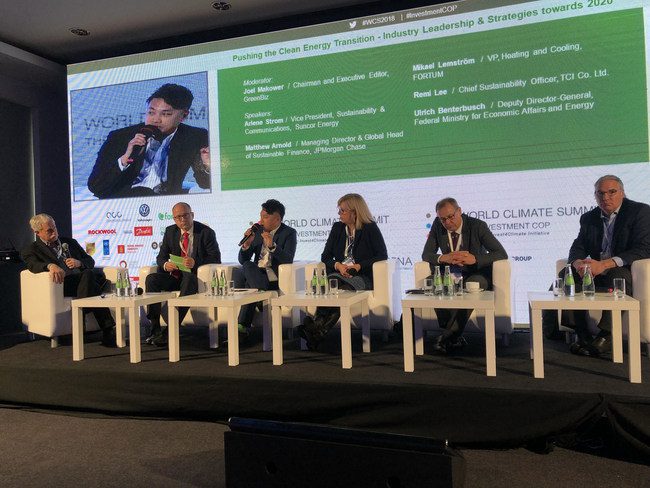 TAIPEI, Taiwan – TCI, headquartered in Taiwan, shared their sustainability progress at the World Climate Summit an official side event to the UNFCC climate negotiations in Katowice, Poland.

At the event they shared the stage with IKEA, Mars, Goldman Sachs, as well as governments all calling for greater collaboration between the public and private sectors.

TCI was honored to speak at two sessions at the summit. Both talks focused on the growing role of manufacturers in mitigating climate change. With industry estimated to take up 27% of carbon emission by 2050, urgent action is needed. In Taiwan TCI has committed to using only renewables by 2030 and to reach carbon neutrality for its main operations.

TCI has committed to sourcing 100 percent of its energy from renewables by 2030, with an interim target of 30 percent by 2020. This year, due to a sizable investment, they anticipate reaching 25 percent renewable energy by year-end.

They intend to reach this goal through purchasing renewable energy and developing new solar plants. Taiwan’s new T-REC program enables TCI to selectively purchase renewable energy from the grid, sending a strong signal of support across the island.

At the event, Remi Lee, TCI’s chief sustainability officer, called for other companies to join them in driving a climate shift. “For us, sustainability is competitiveness. From our packaging to raw materials we adopt circular principles, with green factories we save energy. In the future every company will do this, we are protecting the environment because we see it as a way to sustain our business.”

Also at the event, TCI noted that achieving this goal is not without challenges. Emerging countries face strong economic pressure, and the cost ratio for renewables has not shifted everywhere. Taiwan still uses 95% fossil fuel energy, and despite a generous feed in tariff (FIT) policy gaps remain.

Mr Lee was proud to speak on behalf of Taiwan, he said, “TCI is honored to stand on stage and represent Taiwan, to show the world that this island has a role to play in preventing climate change.”

As part of their overall strategy they recently opened the world’s first green factory for cosmetic facial masks that earned a LEED silver ranking. Its cleaner operations reduce energy demands by 65 percent, decrease water consumption by 30 percent and reduce carbon emissions by 30 percent. Solar panels on top of the facility further reduce energy demand generating 0.26 GWh of electricity per year. Efficient environmental designs, such as this factory will help TCI to achieve its 100 percent renewable goal, Lee said.

On top of renewables, TCI announced carbon offsets for their major operations in Taiwan totaling 5,959 tons. The offsets come from a wind-power facility also located in Taiwan. Mr Lee noted that supporting carbon reduction in Taiwan not only helps the company, it keeps the benefits of mitigation local.

“When we first started, big brands encouraged us to develop green products, now we are the ones pushing them to adopt more sustainable practices,” Lee said after the event. TCI works closely with brands in the planning process, using its combined marketing strategies and extensive experience to develop effective products with intuitive features to meet consumers’ demands. As customers demand more responsible production, TCI looks forward to collaborating with its partners and clients to meet this critical need.

About TCI:
TCI Co, Ltd, was founded in 1980, and now has more than 600 employees worldwide and is a core partner of more than 350 brands across 42 countries. TCI is a large contract manufacturer of dietary supplements, functional beverages, and skin care. We deliver a total solution from concept design to manufacturing. TCI’s products can be found in several dozen countries globally, joining and delighting the lives of hundreds of millions of people. The company strives to develop more effective products to make the world more beautiful for people and nature.