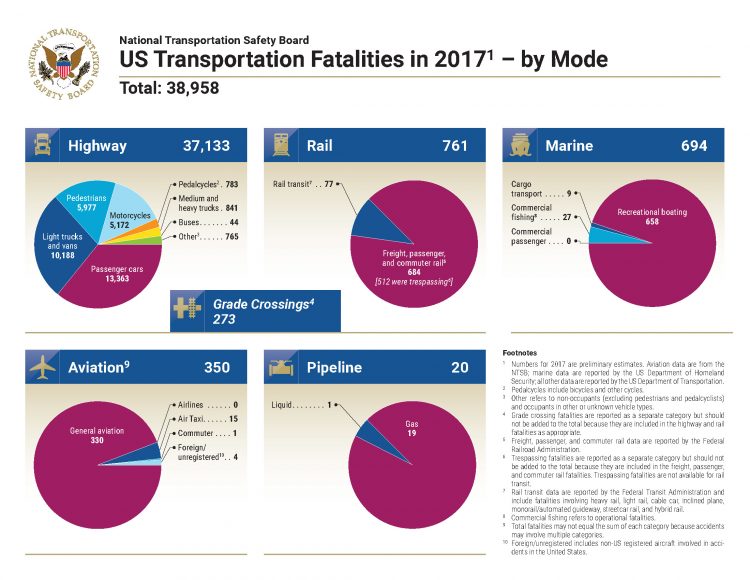 Highway crashes claimed the lives of 37,133 people in 2017, accounting for 95 percent of the 38,958 who died in transportation related accidents that year, according to data provided by the National Highway Traffic Safety Administration and released Thursday by the National Transportation Safety Board.

The data indicate 712 fewer people died in transportation accidents in 2017, compared to the 39,670 who died in 2016.  Aviation, marine and highway deaths decreased while rail and pipeline fatalities increased. Rail experienced the largest increase with 58 more deaths in 2017 than the 703 fatalities in 2016.

While 673 fewer people died in highway crashes in 2017 compared to 2016, highway fatalities continued to represent 95 percent of all transportation fatalities.

“Highway crashes are completely preventable,” said NTSB Chairman Robert Sumwalt. “Implementation of the 369 open NTSB highway safety recommendations, including the 22 recommendations related to speeding, have the potential to prevent crashes, save lives, and significantly reduce the carnage on our nation’s roads.”

Highway fatalities decreased from 37,806 in 2016 to 37,133 in 2017, and crashes involving passenger cars, light trucks and vans, pedestrians, motorcycles, pedalcycles, and buses resulted in fewer deaths, but deaths associated with crashes involving medium and heavy trucks increased to 841 in 2017 compared to 725 in 2016. 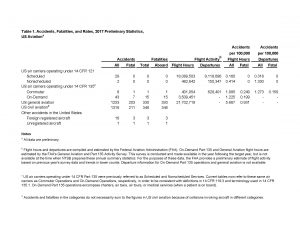 The approaching Thanksgiving holiday weekend is typically the busiest travel weekend of the year in the United States and marks the start of the holiday travel season. The NTSB reminds travelers that speed, distracted, impaired and drowsy driving are key factors in highway fatalities.

When traveling by bus, train or plane, stay buckled up (just as if you were in your car), know where your nearest safety exit is and how to use it, and if directed to evacuate, leave your carry-ons behind!