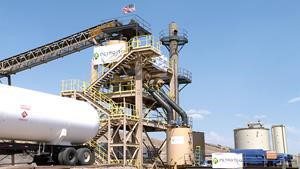 Sherman Oaks, California – Petroteq Energy Inc. (TSXV:PQ) (OTC Pink :PQEFF) (FSE:PQCF) (“Petroteq” or the “Company”), a fully integrated oil and gas company, is pleased to announce that it has initiated commercial production at its Vernal, Utah facility and publishes the following statement from its CEO, Mr. David Sealock:

In my career I have participated in and managed the commissioning of multiple projects that have cost hundreds of millions to build. But, today, I feel that I have really been a part of something special in the North American oil sands industry.

Our “Asphalt Ridge” asset has (from time to time) caught the attention of major oil companies going back 70 years. But nobody has been able to unlock its resources in a financially sound and environmentally friendly manner until the Petroteq team and its proprietary technology came along. I know our investors have been anxiously waiting for updates about our production levels and they should know that I have been taking a calculated approach in initiating production at our new plant in Vernal, Utah.

I know our partners and stakeholders will welcome the approach I’ve implemented; small batch testing of our facility before running it at its intended full capacity of 1,000 bpd. Petroteq is launching a “first” in the industry and those types of projects require deliberate caution when getting started.

The oil sand and shale in Utah and neighboring states is likely the largest known untapped reserve in the United States. That is why what we are doing is so important — we are spearheading a movement that helps towards the goal of the United States becoming energy independent.

I thank Alex Blyumkin, our Chairman and the great team in Utah for letting me come aboard during the crossing of such a significant milestone for Petroteq. I would also like to thank the New York Times for coming to visit us and publishing such a great piece on the Company, in case you missed it the link is here: https://www.nytimes.com/2018/08/21/business/energy-environment/oil-sands-utah.html.

Management has completed the unification, testing, calibration and adjustment of the 14 processes that constitute Petroteq’s patented extraction system. The Asphalt Ridge plant is now in commercial production, adding 200 barrels (or more) into its storage tanks daily which have a storage capacity of 3,000 barrels. Management intends to increase production at a rate of an additional 10% of total capacity in each of the coming weeks until it reaches Petroteq’s goal of 1,000 bpd. Transportation of the oil off site into its chosen markets, including the nearby refineries in Salt Lake City, Utah, is subject to the Company receiving a business permit, which is anticipated in the coming weeks.

The Company is excited for its anticipated delivery of its high quality heavy crude oil into the market which is expected to meet high demand as supplies in the southern states of heavy crude have dwindled with less production coming from traditional heavy oil producers.  The Company has identified multiple buyers for its product as there are multiple refiners in the Salt Lake area that need heavy crude for their desired refining mixture.

Additionally, Petroteq management is extremely pleased with the response it has received while in New York at the HC Wainwright Conference. It will be posting an updated Corporate Presentation at its website and on SEDAR.

Petroteq is a fully integrated oil and gas company focused on the development and implementation of a new proprietary technology for oil extraction. The Company has an environmentally safe and sustainable technology for the extraction of heavy oils from oil sands, oil shale deposits and shallow oil deposits. Petroteq is engaged in the development and implementation of its patented environmentally friendly heavy oil processing and extraction technologies. Our proprietary process produces zero greenhouse gas, zero waste and requires no high temperatures. Petroteq is currently focused on developing its oil sands resources and expanding production capacity at its Asphalt Ridge heavy oil extraction facility located near Vernal, Utah. The Company also owns a minority stake in an exploration and production play located in southwest Texas held by Accord GR Energy Inc.  In addition, the Company, through its wholly owned subsidiary PetroBLOQ, LLC, is seeking to develop the first blockchain based platform created exclusively for the supply chain needs of the oil & gas sector. For more information, visit www.Petroteq.energy and PetroBLOQ.com.

Certain statements contained in this press release contain forward-looking statements within the meaning of the U.S. and Canadian securities laws. Words such as “may,” “would,” “could,” “should,” “potential,” “will,” “seek,” “intend,” “plan,” “anticipate,” “believe,” “estimate,” “expect” and similar expressions as they relate to the Company, including: the facility going into production; the  production capacity being 1,000 bod; the Company increasing its acreage; and the Company successfully developing block chain technology for the oil and gas industry and the anticipated benefits of such technology, are intended to identify forward-looking information. Readers are cautioned that there is no certainty that it will be commercially viable to produce any portion of the resources. All statements other than statements of historical fact may be forward-looking information. Such statements reflect the Company’s current views and intentions with respect to future events, based on information available to the Company, and are subject to certain risks, uncertainties and assumptions. Material factors or assumptions were applied in providing forward-looking information, including: including that Petroteq’s extraction technology produces as expected, starting with 1,000/bod at its existingplant; the Company having the funds (through cash flow or financing) to fund the expansion of its plant as projected;and PetroBLOQ successfully developing and implementing a blockchain-based supply chain management system. While forward-looking statements are based on data, assumptions and analyses that the Company believes are reasonable under the circumstances, whether actual results, performance or developments will meet the Company’s expectations and predictions depends on a number of risks and uncertainties that could cause the actual results, performance and financial condition of the Company to differ materially from its expectations. Petroteq’s proprietary solvent based extraction technology is unproven to produce on a commercial basis 1,000/bpd. Commercial production of 1,000/bpd at its existing plant is unproven and expansion at the existing plant or a new larger plant is subject to financing, development and testing to prove it is achievable and commercial. Certain of the “risk factors” that could cause actual results to differ materially from the Company’s forward-looking statements in this press release include, without limitation: uncertainties inherent in the estimation of resources including whether any reserves will ever be attributed to the Company’s properties; since the Company’s extraction technology is proprietary, not widely used in the industry, and has not been used in consistent commercial production, the Company’s bitumen resources are classified as a contingent resource, because they are not currently considered to be commercially recoverable; full scale commercial production may engender public opposition; the Company cannot be certain that the bitumen resources will be economically producible and thus cannot be classified as proved or probable reserves in accordance with applicable securities laws; PetroBLOQ not having the expertise and/or funds necessary to develop and implement a blockchain-based supply chain management system; PetroBLOQ not being able to develop the blockchain technology to completion; blockchain technology not being adopted by the oil and gas industry; changes in laws or regulations; the ability to implement business strategies or to pursue business opportunities, whether for economic or other reasons; status of the world oil markets, oil prices and price volatility; oil pricing; state of capital markets and ability by the Company to raise capital; litigation; the commercial and economic viability of the Company’s oil sands hydrocarbon extraction technology, and other proprietary technologies developed or licensed by the Company or its subsidiaries, which are of experimental nature and have not been used at full capacity for an extended period of time; reliance on suppliers, contractors, consultants and key personnel; the ability of the Company to maintain its mineral lease holdings; potential failure of the Company’s business plans or model; the nature of oil and gas production and oil sands mining, extraction and production; uncertainties in exploration and drilling for oil, gas and other hydrocarbon-bearing substances; unanticipated costs and expenses, availability of financing and other capital; potential damage to or destruction of property, loss of life and environmental damage; risks associated with compliance with environmental protection laws and regulations; uninsurable or uninsured risks; potential conflicts of interest of officers and directors; and other general economic, market and business conditions and factors, including the risk factors discussed or referred to in the Company’s disclosure documents, filed with the securities regulatory authorities in certain provinces of Canada and available at www.sedar.com.